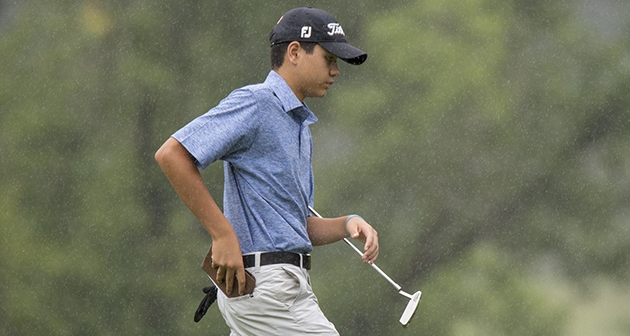 Sample & Company Lead After Opening Round of NYS Junior

Rain showers came and went throughout the morning and early afternoon, causing a couple of rain delays that added up to around two hours of total play stoppage.

Defending champion, Jude Cummings currently sits tied for 25th after carding a 6-over 78. The two-time titleholder from Irondequoit Country Club was 1-under on the front side of the Robert Trent Jones layout, but struggled on the back with four bogeys, two doubles and a lone birdie on #12.

Due to the forecast showing more inclement weather heading into Hamilton for Wednesday, the committee has decided to replace scheduled tee times with a shotgun start in the morning for tomorrow’s final round.

Sample, who has a good opportunity to replicate Jude Cumming’s accolade of winning the Sub-Junior and Junior in consecutive years (and be the third in NYSGA history to do so), felt good about his round today and the much longer yardage this year didn’t seem to affect him much.

“It’s a very different course from the back tees. But, I thought I hit the ball well and was close to having something really low,” he mentioned.

The 15-year-old from New York City strung together three birdies on the seventh, eighth and ninth holes to turn at 2-under, just a one-stroke advantage over Cummings, whom he was paired with today along with Austin Fox of Normanside Country Club.

“I’ve played with Jude a number of times, he’s great to play with and we love the competition,” he mentioned of their round together.

It seemed as the two 2017 champions fueled each other’s competitive prowess throughout the front, but things seemed to shake up a bit when they made the turn.

“I was playing great, feeling good and just came off a birdie. Then there was that delay, I made double (on #14) and then pretty much bogeyed out,” said Cummings of his much different back nine performance.

Sample struggled a bit too, going bogey-bogey on #10 and #11, but regained control with steady pars on the way in until the home hole, where he finished with a bogey to finish over par.

Tomorrow, he’s focused on sticking to his game plan to try and capture his second state crown. “I wanted to come back and do something this year. I felt good about my game going into this week and just wanted to come out and get off to a good start. Who knows what will happen weather wise and how that could affect everything. I just need to stay patient out there.”

The two others joining him in the leader group, both felt the hour-long rain delay today actually helped them stir up some momentum through their finishes.

“I didn’t get anything going until rain delay,” said Bicks about his three birdies towards the end of his round. He began on #10 today, and turned at 39 but then went 2-under on the front to keep him in the mix.

He’s excited about his position headed into tomorrow. “The course itself is long, it’s a grind. There’s not that many scoring holes, but it fits my eye well. I’ve been in the last group a couple of times. It’s tough, you need to stay patient…especially out here.”

Whittaker of Ithaca, who plays most of his golf at Country Club of Ithaca and its bordering neighbor, Robert Trent Jones Golf Course at Cornell University, can identify a lot of familiarity between his home track and Seven Oak’s layout.

“I love this course. The similarities make it much easier coming here.”

This was a little unusual for Whittaker, who mainly plays a steadier, less aggressive game. “I like to play for par. I usually have to get up-and-down a lot but today I got the irons going pretty good. Much better than usual.”

Twenty-six players are within five strokes of the leaders, and with tomorrow’s questionable weather could make for an interesting outcome by the championship’s finish.