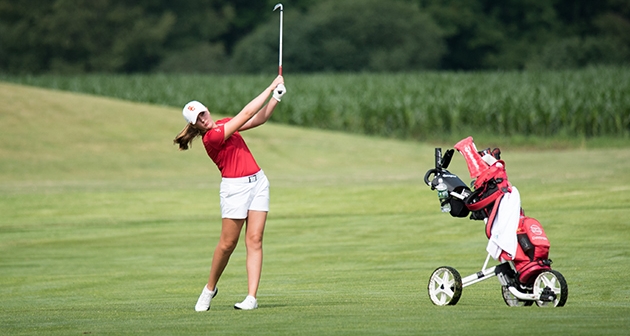 Two of New York State’s top junior players were recognized among a class that includes 48 boys and 48 girls, ages 14-19, from 26 states and seven countries.

Luke Sample of New York, received Boys Second Team honors. His AJGA ranking for the season was 21st as of Oct. 14.

The 17-year-old had a banner year on the local circuit winning the Met Junior, finishing runner-up at the Met Amateur and became the youngest golfer to win the Met Open Championship in its 105-year history (first amateur winner since 2005). He also won two AJGA tournaments, including the AJGA Junior at Penn State and the KJ Choi Foundation Junior Championship. The player from Old Oaks Country Club won the NYS Junior Amateur title consecutive years in 2018-19 (this year’s championship canceled due to COVID-19), and will look for a final defense in 2021. He is verbally committed to Duke University, class of 2021.

The 15-year-old out of Seven Oaks Golf Club, finished as runner-up twice in AJGA events this season, during the Sean Foley Performance Junior Championship and the Arnold Palmer Invitational Junior. She had several other top-10 finishes at prominent events that launched her into her first Rolex Junior All-American class. Shoemaker has won the last three consecutive NYS Girls’ Junior Amateurs (2020 canceled due to COVID-19), and will look for another defense of the crown in 2021. She is verbally committed to University of Southern California, class of 2023.

The 2020 AJGA Rolex Junior Players of the Year were Kelly Chin of Great Falls, Virginia, and Rose Zhang of Irvine, California, who became the sixth female player to win the honor in consecutive seasons.

All players who were recognized, will be honored virtually through a Rolex Junior All-America Awards celebration on Friday, December 4. Prior to the digital event, these players along with other top AJGA performers will compete at the Rolex Tournament of Champions, Nov. 23-28 at PGA National Resort & Spa in Palm Beach Gardens, Florida.