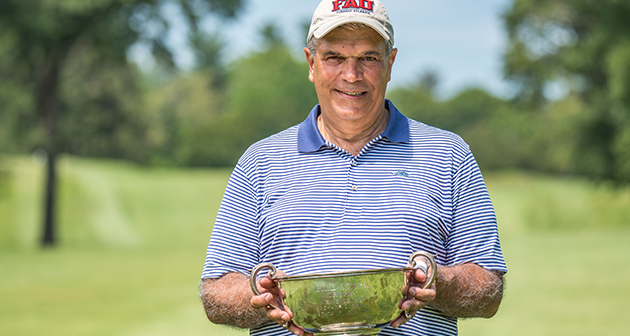 “It’s fantastic,” Russo said after the victory. “Anytime you win, no matter what tournament you’re in, it’s great and when it’s a state thing it makes it even better. There’s a lot of good players and I’m humbled and fortunate enough to come out on top.”

Russo was the only player to card two rounds under par, though he admitted his last round was tough, especially towards the end of the back nine. Russo entered his final round with a six-stroke lead.

“It's very difficult to play with a bigger lead because everyone expects you to win,” Russo said. “As much as you try not to think about that it creeps in. Then you start to hit the ball horrendously, and now a couple doubts creep in.”

He described how he felt the momentum shift during that stretch toward his opponent, Kevin Vandenberg of Tuscarora Golf Club.

“There’s always going to be a couple holes during the round where there’s going to be a flip,” Russo said. “That happened on nine and then the back nine. After (hole) twelve everything seemed to be okay, then all of the sudden I couldn’t hit a golf shot.”

Though Russo was able to carry the momentum he built throughout the first two rounds to the end and come out on top. He won the championship by one stroke.

“It’s very difficult to win at any level so I’m thrilled,” Russo said. “The first round I putted fairly well. The second round I hit the ball well, and today was just none of the above. It happens.”

Vandenberg finished as the runner-up in his first year eligible at the senior amateur.

“It was a good week. I qualified Monday for the U.S. Senior Am in Detroit, then finished second here,” Vandenberg said. “Today was just kind of an average day. It was nothing really outstanding. Nothing really bad, nothing really good, but happy to finish runner-up.”

Vandenberg shot four-over 214 (68-74-72) over three rounds and nearly overcame a six-stroke deficit to begin the round. He kept pace with Russo throughout today’s round despite a couple shots not going his way on the back.

“I hung in there, kept making pars and then I had to do a little calculation on the seventeenth green and found out I was only one back,” Vandenberg said.

Vandenberg’s drive on the eighteenth hole drew to the right. His next shot hit the front side of the green, but wouldn’t stop and rolled nearly back down into the fairway. That set up a lengthy putt that could have potentially sent he and Russo into a playoff. The putt came close, but missed the cup as Russo was able to calmly tap in a par to secure the championship.

“I told Dan, this is hopefully the first of many duels between Dan and myself in the future,” Vandenberg said. “Dan’s a great player. I knew it was going to be an uphill battle today.”

Jim Mueller of Orchard Creek Golf Club (216), Dennis Lynch of Nassau Players Club (217) and Jack Weinerth (219) of Highland Park Golf Club rounded out the top five. All of them earned an exemption to the New York State Men’s Amateur championship next week at Schuyler Meadows Club. 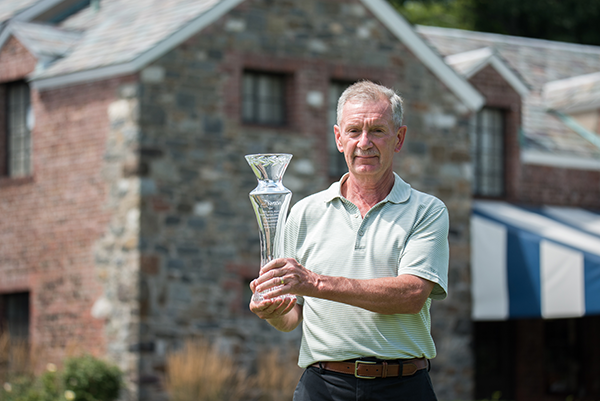 “I’ve had a lot of thirds, numerous top tens in the state am. I’ve had fourth and eighth in the mid-am, third in the super senior,” Dean described. “As far as winning, this is it. It feels good.”

Upon winning, Dean dedicated his title to Betty Deeley, a long-time NYSGA chairwoman for over 40 years. Deeley and Dean would always connect during tournaments when she was officiating. She was inducted into the NYSGA Hall of Fame in 2012.

“I saw Betty at all the events and everyone knew Betty,” Dean said. “She kept saying, ‘Scott you’re going to win one of these days.’ Betty, this one’s for you.”

Dean entered his third round with a small lead, and kept trading spots at the top of the leaderboard with his playing partners, Bob Cooper of Schenectady Municipal Golf and Jim Burns of Canandaigua Country Club.

“It was like that all day,” Dean said. “Luckily we made it through 18 and the dust settled and I was four ahead. I had (almost) zero pars on the back nine, that’s a first for me. Four birdies and that was enough.”

Dean started his back nine with three birdies in his first four holes, with a double-bogey sandwiched in between. He would go back and forth between birdies and bogeys for nearly the rest of the round. Though he bogeyed on 18, Dean was able to finish with a comfortable victory.

“The putting was good, it was very good,” Dean said. “The putting was as good as it has been in the last two days. Today I made the short putts. I made a couple 20 footers for birdies. I hit a couple good shots on ten, eleven, twelve.”