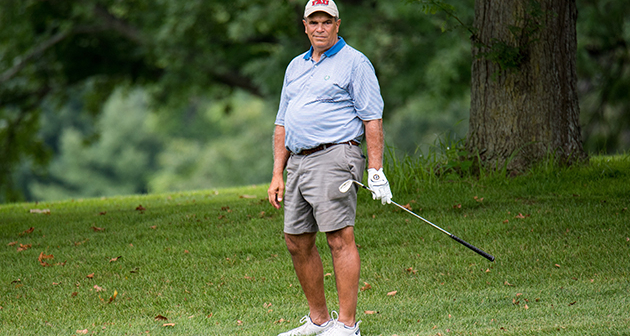 NEWBURGH, N.Y. - Daniel Russo of Schuyler Meadows Club extended his lead to six strokes heading into the final round of the 2021 New York State Men’s Senior Amateur Championship after shooting one-under 69 in his second round at The Powelton Club.

Russo, the 2019 champion, was two-over through his first nine holes, then surged with four birdies on the back, including three across holes four through seven.

“On the back nine, I hit the ball good,” Russo said. “I just want to hit the ball solid. Whatever happens after that, it happens.”

Russo started on the tenth hole, one that resulted in several large scores for the field on Wednesday. Russo was able to earn a par.

“The tenth hole is a hard pin,” Russo said. “First of all it's a good hole anyways but it was a hard pin. I actually hit a three-wood off the tee. I pulled my second shot, I hit a chip and then hit my putt for par.”

Headed into the final round tomorrow, Russo has built a comfortable lead at four-under 136. Though for him, the lead isn’t significant.

“It’s great, it’s perfect. You start six ahead but that means nothing,” Russo said. “You still have to go out and play tomorrow.”

Sitting behind the defending champion is Kevin Vandenberg of Tuscarora Golf Club, who shot a 74 to finish with a two-day total of two-over 142.

“Today just wasn’t my day, you have those days,” Vandenberg said. “I got off to a very poor start, got behind some trees on ten...my iron play was pretty good, but the tee ball remains to be seen whether I can find that before tomorrow or not.”

Though Vandenberg started slow, he was able to sink a pair of birdies on the back nine. Although it was not enough to break par as he did in his first round.

“Usually I have one bad round per tournament, and hopefully this was it,” Vandenberg said. “I was happy with my even par on the back nine.”

Jim Mueller of Orchard Creek Golf Club joined Russo as the only players to shoot under par in the second round, with a one-under 69 scorecard.

“I was in play and I hit irons close. Considering how yesterday I only hit eight greens the whole day, it was much better,” Mueller said. “It just started clicking. I started hitting wedges in tight. The two par threes I had some really good opportunities.”

Mueller double-bogeyed hole ten, but responded with an eagle on 11. He hit a driver off the tee, sitting a little over 200 yards from the green. A shot with his hybrid landed him less than ten feet of the cup.

“I had no clue it was going to end up about eight feet away,” Mueller said. “That calmed me back down a little. The eagle to get me back down to even was nice.”

The trio of Russo, Vandenberg and Mueller will be paired tomorrow in the final group at 9:10am. 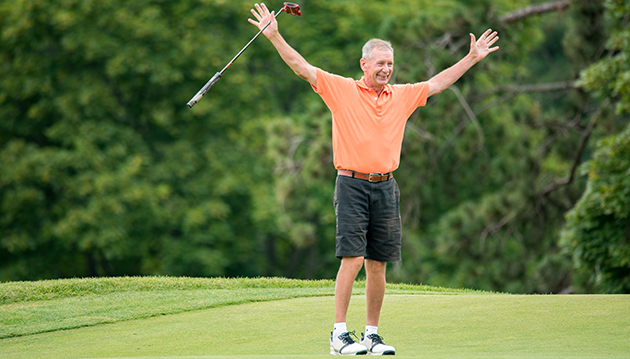 In the concurrent Super Senior Division, Scott Dean of Woodstock Golf Club holds a one-stroke lead heading into the final round after shooting three-over 73 on Wednesday.

“I actually played better on the harder holes today and not as good on the easier holes,” Dean said. “I guess it all averages out but it was just a strange day. I was very lucky today to have some nice shots go in, so here I am.”

He started his back nine with a pair of birdies, including the troublesome tenth hole.

“It’s a two-tiered green and the back of the green is about the size of a ping pong table with a three foot tier going up to that ping pong table, so you definitely don’t go for it in two. My goal was just to be lucky enough to hit a par up there for a lag. I’m thinking there’s probably not too many birdies there today.”

He ended his round on a positive note with a birdie on seventeen to help him grab the top spot in the leaderboard.

Bob Cooper of Schenectady Municipal Golf currently sits in second place at five-over 145. He was four over through nine holes, but responded with two birdies on the back to steady his score.

Third place is occupied by three players: Jim Burns of Canandaigua Golf Club, Jim Hamburger of McCann Golf Course and Michael McNulty of Park Country Club who all sit at 146.

Burns led after the first round, and felt he caught a couple breaks on the course today to be able to stay within a few strokes of the lead.

“It wasn’t a great ball striking day,” Burns said. “The round was a lot of work. Yesterday it came pretty easily, but tomorrow I anticipate it being another tough day. It took basically nine holes to get the motor running but once we got going we were fine.”

Burns mentioned that the course played harder than yesterday.

“Greens were definitely a little quicker than yesterday, but fair,” Burns said.

Hamburger, the 2018 champion, shared a similar sentiment with Burns in regards to ball striking.

“I was very pleased with the score I had because I really had nothing out there,” Hamburger said. Hitting the ball was not a strong point...but I putted like a demon and that really saved my round today.”

Hamburger described an adjustment he made after his round yesterday that allowed him to fair better on the greens today.

“I worked on my mechanics yesterday after the round because they were so poor. I made an adjustment and the adjustment I was able to carry into the round today.”

Dean, Cooper and Burns will be paired together in the final group tomorrow at 9am.