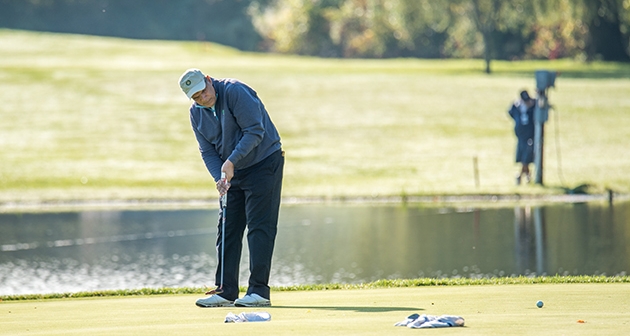 MANLIUS, NY – Daniel Russo of Schuyler Meadows Club leads the field by a stroke after the second round of the 2019 NYS Men’s Senior Amateur Championship at Cavalry Club in Manlius.

The Capital Area standout from Hagaman, followed up an even-par 72 on Tuesday with a 73 on Wednesday for a 1-over 145 over two rounds.

“I didn’t play as well as yesterday and just made one bad swing,” said leader Russo, referring to his lone double bogey on the par-5 fourteenth. “I’ve got to get away from those big numbers. Other than that, I played pretty steady.”

Bufalini birdied his opening hole, but then gave three strokes back on 11, 12 and 13 (he began on 10). “You can’t give the momentum right back. It kind of set the tone the other way. The swing wasn’t quite there. It felt like I was kind of fighting all day.”

Hicks, who’s the superintendent at Robert Trent Jones Golf Course at Cornell, posted twin 73s in the opening rounds. “There was good and bad and I just hung in there. Two holes I hit it in the water and made pars, so that was huge,” he said referring to Nos. 4 and 10.

He was paired with the 2016 and 2018 champion during the opening two rounds.

“That was awesome. Their mental game is so strong that it kind of helped me to watch them and be in that group with those guys. It was a lot of fun.”

The defending champion Robert Hughes of Watertown Golf Club and Jim Mason of Oak Hill Country Club sit two strokes back at 147 (+3). Mason came in with 1-under 71 with six birdies.

Mason had six birdies during the round, which propelled him into red numbers, despite a few untimely mistakes. “I putted fantastic today. I hit it good enough, but just made a ton of putts, he mentioned."

Hughes, who won in a sudden-death playoff last year at Mohawk, is now only two strokes back from Russo after today’s even-par score. “I was a couple behind last year, so I’m not too worried.”

Jim Mueller of Orchard Creek Golf Club sits at 148 and will join them in the penultimate group.

Richard Luther of Stafford Country Club shot a low round of 2-under 70 today after opening with an 80 to survive the two-round cut and climb up the leaderboard. Also at 151 is Jack Weinerth of Highland Park Golf Club, Ken Cohen of Villa Roma Country Club, and Andy Conway of Ravenwood Golf Club.

The cut was applied to the low 50% of the field (including ties) and fell at 160 with 44 players from the Senior Division moving into tomorrow’s final round.

In the Super Senior Division, John Hamilton of Hudson National Golf Club maintains his one stroke advantage heading into Thursday’s final with 2-over 146.

The 2017 runner-up shot another 73 today around the 6,018-yard layout with seventeen pars and a lone bogey.

“The course played easier today, lighter winds and the green speeds were up a little bit,” he said about the course setup. “It’s always a lot of fun to play in the final group. I’m going to play my own game, make the same types of swing and keep grinding away.”

Last year’s champion Jim Hamburger of McCann Golf Course shot the low round of the day with a 71 to push within a stroke of Hamilton.

“I hit about fifteen greens in regulation. I didn’t have too many times when I was scrambling. I definitely just need to putt better to have a chance to win,” Hamburger mentioned.

Joining them in the group will be Scott Dean of Attica Golf Club (148).

“Tomorrow I’m just looking to be steady. Hit some nice tee shots down the center and get some birdie putts,” Dean said about his mindset.

Mark Battle of Ravenwood Golf Club is in fourth at 150.

Jim Castle of Seven Oaks Golf Club and Dale Tepas of Canandaigua Country Club will be paired with Battle in the penultimate group and both sit at 151.

The cut fell at 160 with twenty-six Super Senior players advancing into Thursday’s final round.

The field will be re-paired into threesomes for the final round based on score, and tee times are scheduled every ten minutes from 8:00am – 9:40am, off both #1 and #10. The leaders for both divisions will tee off #1.