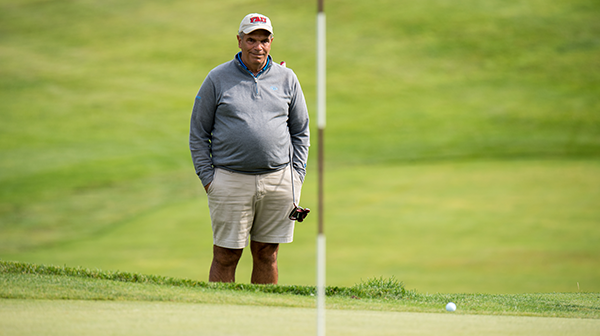 Russo/Burns Lead Respective Divisions After First Round of Senior

NEWBURGH, N.Y. - Daniel Russo of Schuyler Meadows Club is the leader after one round of the 64th NYS Men’s Senior Amateur at The Powelton Club.

Russo, the 2019 defending champion, started strong with two birdies in his first four holes. On the second hole, a short par 4, Russo drove the ball just over the green. The ensuing chip put him within 30 feet of the pin, where he sunk the long putt.

“I got a couple good breaks,” Russo said. “You got no shot from back there. I chipped it to the front edge then hit about a 30 footer for a birdie. So that’s an extra one that you weren’t accounting for.”

On the fourth hole, an uphill par five, Russo stuck his approach shot short of the green, but was able to chip the ball in on his next shot for his second birdie.

“There’s two birdies that you won’t get every day, that’s for sure,” Russo said. “I got away with a couple things but all in all, it was a good round.”

From there, Russo drained three more birdies, including two to initiate the back nine, en route to shooting the lowest round of the day, 3-under 67.

“I hit a good shot on 10 to about three feet. On 11 I knocked it on the green in two and two-putted,” Russo said. “Nine I hit an awful drive to the right. I was in the other fairway. Chunked my second shot under the trees. I was lucky to make a bogey there. Other than that, it was pretty straightforward.”

Kevin Vandenberg of Tuscarora Golf Club was the other player to shoot under par, finishing two-under 68 to take sole possession of second place.

“I had a couple birdies early and then a couple loose shots to get me back to even,” Vandenberg said. “I was pretty pleased with how the round went today. I just need to keep it in play a little better.”

An eagle on the par-five eleventh hole allowed Vandenberg to shoot up the leaderboard.

“Hit (the drive) a little right,” Vandenberg said. “I hit a six iron (next) and had to cut it around a tree. I made probably a 30-foot putt so it was a little bit of luck.

“I pretty much kept it in play off the tee, which you have to do here,” Lynch said. “Hitting in the fairways is very important...A lot of interesting holes and a lot of up and down.”

A birdie on 18 punctuated his performance. It was one of the few holes that Lynch opted to not use his driver.

“I hit hybrid and it just rolled through into the rough. It was a back pin (placement), and I was lucky enough to have a decent lie where I can hit it up below the hole, about six feet and made that.”

Pierson was three-under through his first six holes.

“I got off to a really good start,” Pierson said. “My iron play for the first eight holes was really spectacular. I’ve been struggling a little bit, but lately I've been playing a lot better. So that’s kind of what led to it, I felt comfortable.”

For Pierson and Vandenberg, this is their first appearance in the NYS Senior Amateur. 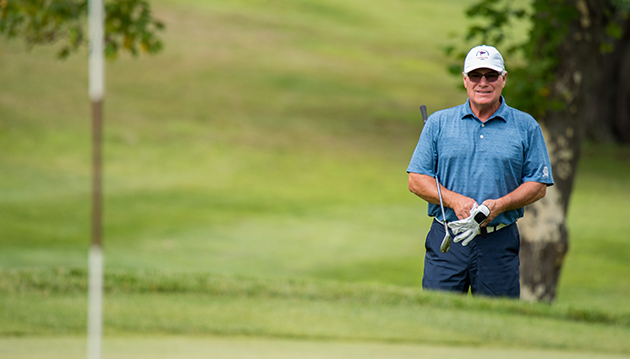 In the concurrent Super Senior division, Jim Burns of Canandaigua Country Club sits atop the leaderboard after one round of play.

He sunk three birdies en route to shooting an even-par 70. He was the only player in his division to not shoot over par. Teeing off on the tenth hole, Burns birdied the twelfth, second and fifth holes.

“This is a very unique course,” Dean said. “You’ve got to be very careful on this course. You can take a high score quick. I was very lucky today, I had some nice shots but I had a few shots that caught some breaks.

Dean credited his putting to the low round on Tuesday, hitting two putts of about 20 feet.

“My putting was above average today,” Dean said. I normally don't make long putts. I had a couple of them that were trucking pretty good, hit the cup and went in which was pretty nice.”

One of those long putts came on hole No. 7, Powelton’s signature par-three. Dean was elevated at the top of the green, and had to maneuver his ball downhill on a slope.

“I was 20 feet on top of the hill,” Dean described. “It was a downhill, really fast breaker. I just barely got it moving and it was picking up speed toward the flag.”

Dean also caught a few breaks, including No. 11.

“I was planning on laying up 20 yards short. I think my rangefinder shot something behind the green because my lay up was 10 feet right of the flag. I missed the eagle putt and two-putted,” Dean said. “That was another nice break right there.”

Cooper, who is competing in the Super Senior Division for the first time this year, started off with four bogeys in his first five holes, but responded on the back nine with four birdies, including three consecutive from holes two through four.

“It was an up and down round,” Cooper said. “My iron game was very good today. I birdied three of the par threes. The driver was a little hinky in the beginning.”

On hole No. 7, Cooper sat atop the hill, similar to Dean, and sunk a 25-foot putt for his fifth birdie of the day.

“It was straight up at it,” Cooper said. “I reminded myself to hit it hard enough and it went in.”