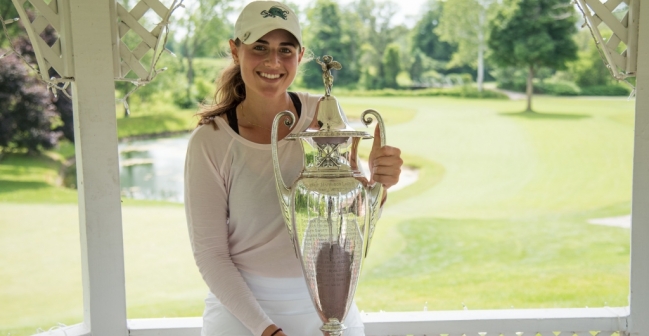 After 54 holes, Rosenberg of Glen Oaks Club and Chelsea Dantonio of Crag Burn Golf Club were tied atop the leaderboard at two-under 217. Rosenberg carded a 70-75-72 over the three rounds, while Dantonio shot a 76-76-65.

Dantonio, who was runner-up at last year's championship, was seven strokes back from Rosenberg entering the final round. She proceeded to play an incredible, mistake-free 18 holes that included eight birdies and ten pars to climb into contention. She caught fire on holes 9 throught 12 with four straight birdies, which brought her into a tie with the two-round leader. Rosenberg birdied the thirteenth hole to regain lead by a stroke, until the par-5 16th, where Dantonio knocked down a 35-foot birdie to even things again at 2-under. The duo made pars on their final two holes, leaving a playoff to decide the 2019 champion.

On the first playoff hole, #18, Dantonio left herself with a 4-foot putt for birdie while Rosenberg missed the green left by a few feet. She almost chipped-in from a difficult downhill lie, her ball rolling just past the left edge of the cup. Dantonio was unable to convert her birdie, and the two remained on the eighteenth for the second hole of the playoff.

The pair then hit almost identical drives down the middle of the fairway. Rosenberg went first and landed her shot 10 feet from the flagstick. Dantonio's ball rolled through the green leaving her a with a chip. Dantonio was then unable to get up-and-down, and Rosenberg made her par to secure the victory.

Dantonio's eight-under 65 is a new course women’s record for Lancaster Country Club. Speaking on her round, Dantonio said, “I just tried to keep within myself the whole day and I made almost every good shot. I want to take it to the next level and to do that you have to shoot under par. Seeing that I could do that today, it felt really good.”

Though Dantonio gave her a close scare, Rosenberg was able to secure the title after leading the field all week.

“Today was a bit stressful. Chelsea played lights out and it was fun to watch. At one point I was cheering her on.” she explained. "When we were on the playoff, I was in a bad position and things looked like they were going to be different. But I kept my cool and stuck with my game plan."

She alluded to her advantage off the tee when asked about how her game played into the 6,067-yard par 73 layout. "I hit some good drives, my distance definitely helped on this course. It set me up pretty well all week."

A two-over 75 during the final round, secured an 11-stroke victory for Jenna Hoecker at the 11th New York State Women’s Mid-Amateur Championship.

Hoecker shot a 77-73-75 over the three days at Lancaster to secure her second, back-to-back Mid-Am title. She was at the top of the leaderboard all week. This marks Hoecker’s third state title as she won the Women’s Amateur in 2013 at the Country Club of Ithaca.

“This one was the most fun just because I haven’t been able to play as much as I want to, so I was able to test myself and compete with everyone,” she said.

Teresa Cleland of Bellevue Country Club earned runner-up honors with a seventeen-over 236 finish (77-77-82). Cleland and Hoecker were tied for the lead after the first round.

Though the three-time Mid-Am winner was unable to capture the top spot, she was just happy to be there.

“It’s been a lot of fun. Jenna is such a good player. I had a disappointing finish, but I feel like I have had a pretty good week,” she said.