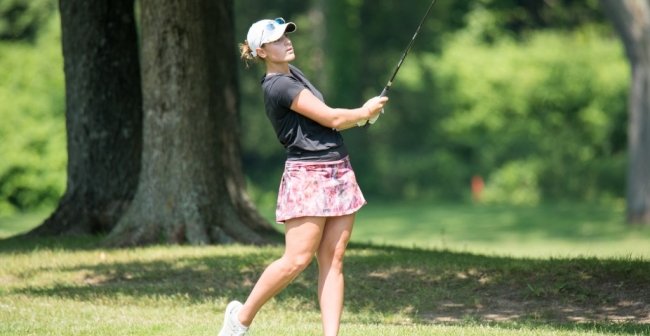 Rosenberg/Hoecker Retain Their Leads After Second Round

LANCASTER, N.Y. - Jennifer Rosenberg extended her lead to four strokes during the second round of the 90th New York State Women’s Amateur Championship at Lancaster Country Club in Lancaster, NY.

One round away from her first title, Rosenberg explained her approach going into the final 18 holes.

“I am just going to keep to myself and play my game, not really focus on the scores. I’m going to try to improve my putting and focus in on myself. The course is playing tough, so tomorrow will be a challenge,” she explained.

Next on the leaderboard sits 2013 NYS Girls’ Junior Champion Alexis Hios of Westchester Country Club, who’s three-under 70 today brought her to a total of 149.

The Towson graduate started the round with two straight bogeys and a double bogey. Something clicked in Hios’ game as she went on to convert eight birdies in her last fifteen holes.

“The beginning of the round was a little rough. It was the warm-up three holes. I needed to get it out of my system and then keep going. I think it was just a momentum thing. I just needed the one to keep the rest of it going,” she said.

Joining them in the final pairing will be Crag Burn’s Chelsea Dantonio who sits at 152, who finished runner-up last year when the championship was held at Yahnundasis Golf Club in New Hartford.

The 36-hole cut fell at 167, with 14 players advancing into tomorrow’s final round.

An even par of 73 puts Jenna Hoecker of Brook-Lea Country Club in sole possession of first place by four strokes after the second round of the 11th New York State Women’s Mid-Amateur Championship.

Hoecker finished four-over 77 yesterday. The 26-year-old spoke on the transition from the first round to today.

“I had a better start today than yesterday. I had to grind it out today and was much better at finishing. I had an eagle on seven and a couple birdies which helped. I putted a lot better. I just have to be more consistent hopefully for tomorrow. Just trying to piece it all together,” she said.

Paired with the defending champ will be three-time Mid-Am Champion Teresa Cleland of Bellevue Country Club, who carded matching 77s in the first two rounds and is at 154, as well as 2019 Women’s Four-Ball Champion Pennie Carlo of Crestwood Golf Club at 156.

Cleland and Hoecker were tied for the top spot after yesterday’s first round. Speaking on her play today, Cleland said, “It’s a repeat 77. I had it going on the front side and then double-bogeyed number nine. That was a bad mistake. I got a little two aggressive on the putt and didn’t make the comeback. But overall, I felt pretty good about it.”

Carlo looks to capture her first Mid-Am title, and second NYS title. Carlo’s mindset for the final round is to focus on the good.

The two-round cut fell at 167, with six players continuing into tomorrow’s third and final round of action. The cut was made to the low 50% of the field and ties, as well as anyone within ten strokes of the lead.