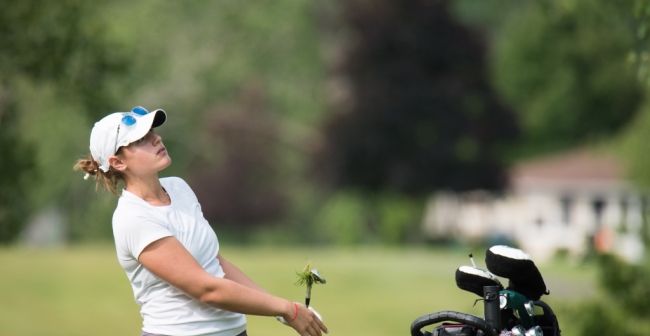 LANCASTER, N.Y. – Jennifer Rosenberg of Glen Oaks Club carded a three-under 70 and holds a one-stroke lead after the first round of the 90th New York State Women’s Amateur Championship at Lancaster Country Club in Lancaster, NY.

Related: Results / Round 1 Photos / Round 2 Pairings

Rosenberg converted six birdies in route to her 3-under finish.

“I was making pars and then here and there making a birdie. My putting struggled on the front, but then all of sudden, I started making every putt and had four birdies in a row which really helped my round. If you can make putts, you can shoot anything,” she explained.

Schultz’s key to her performance: putts. “I made some long putts. On seven, I had a bad tee shot, I was zigzagging around the hole. And then I had probably a 30 footer,” she explained.

Cox made the turn at par but struggled on the back nine: “I didn’t take advantage of holes I should have. There was a lot of room to improve. I had a pretty horidenous eight on 13 with two lost balls. I still feel pretty good. I still feel like I could make up some room for the next two days and I am pretty optimistic about it."

Five others broke 80 including Pasqualina Tartaglione of MGA eClub - Hudson Valley and Faith Francioso of The First Tee and Eisenhower Park at 77, Ally Steffen of Winged Foot Golf Club at 78, and past NYS Girl's Junior champion Alexis Hios of Westchester Country Club and Elena Lopez of Crag Burn Golf Club, both carding 79s.

In the opening round of the 11th New York State Women’s Mid-Amateur Championship, defending champion Jenna Hoecker of Brook-Lea CC and Teresa Cleland of Bellevue CC lead the field by one after a four-over 77.

Hoecker had a rocky start to Round 1 of the championship: “I was kind of scrambling all day, so I was really happy with a 77. I haven’t played as much as prior years, been working a lot. The greens were quicker than I anticpated, so I have to read the greens better. I’m going to go home and work on my irons and hopefully hit the ball better tomorrow."

Cleland, a three-time Mid-Am champion, spoke about her excitement for the rest of the championship.

"I am excited. I love to play. I like to play, I like the challenge of it. It is always fun," Cleland said.

2019 NYS Women’s Four-Ball Champion Pennie Carlo of Crestwood Golf Club was the only other player to break eighty in the Mid-Am division. The Rome native came in at five-over 78.

Tomorrow, both fields are in for another 18 holes of stroke play, followed by a 36-hole cut to the low 50% of the field and ties, as well as anyone within 10 strokes of the lead.