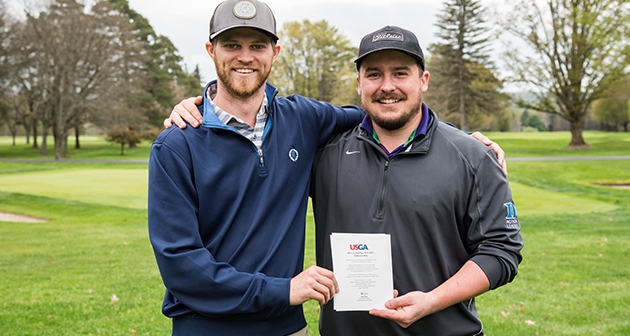 Twenty-six sides competed for one qualifying place and two alternate positions into this year’s championship, scheduled for later this month at Chambers Bay, May 22-26.

Rochester players Shane Dobesh and Yaroslav Merkulov (4x NYSGA champion) advanced with a birdie on the second hole of the sudden-death playoff, to earn the qualifying spot into this year’s championship.

After eighteen holes, they were tied atop the leaderboard with Jamie Miller (2x NYS Mid-Am champion) of Silver Creek and Tony Hejna of Cleveland, Ohio (who resides in Buffalo) at 8-under 63. The playoff began on the tenth hole, where both teams made par, and was finalized on the eleventh.

Miller and Hejna will be first alternate.

North Carolina’s Joe Kastelic and Brad Magnum are the second alternate team after shooting 6-under 65.