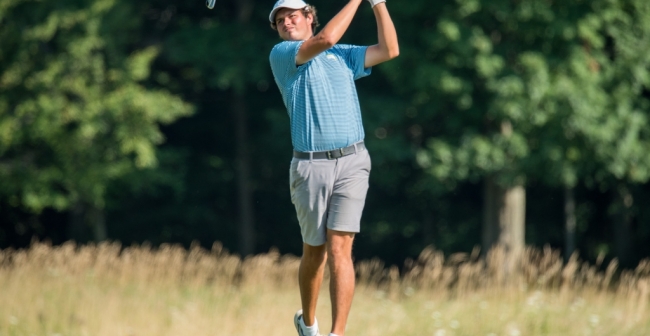 Reichert and McGaugh sit at even par 144, one stroke ahead of the field.

Reichert, the 2015 NYS Boys’ Junior Champion, carded a 67 in round two, ten strokes better than his first-round score. His day two scorecard included five birdies and an eagle on 16, a 529-yard par 5.

“I got off to a slow start today. I was two-over through six. I pretty much played flawless golf from that point out. I think I maybe missed one fairway the rest of the way,” Reichert said.

McGaugh also converted five birdies during the second round. Speaking on his performance, McGaigh said, “I kept it in the fairway and that’s step one. My putting was really solid throughout the day. My wedge game was probably the best part of my game today. I feel really confident going into tomorrow.”

One stroke back at 145 sits 2018 runner-up Chris Blyth of Mendon Golf Club and Prescott Butler of Piping Rock Club.

When playing a tough course like Crag Burn, Blyth focuses on being patient and not forcing anything. He had similar scorecards on both days, finishing at 73 and 72.

“I knew the course was going to be tough. I just tried to be patient out there and let the course come to me. Not do anything stupid out there and play my game. Try to make as many pars as you can. Pars are birdies out here,” Blyth said.

Butler will play alongside Blyth tomorrow after carding a 74 and 71. His scorecard in the second round included four birdies.

“I hit it a lot better today than I did yesterday. I feel like I could go a lot lower, so I am excited for tomorrow. Hopefully, I will be in the final groupings and have a chance to win the State Am,” Butler said.

Butler is entering his sophomore season of the University of Alabama golf team. Speaking on this experience, Butler said, “I love our coaches, Coach Seawell. It’s a really competitive environment. I love my teammates, it’s a lot of fun.”

Three-time NYS Champion Jamie Miller of the home club carded a one-under 71 in today’s round to finish with a two-day total of 146. Miller won the 2014 & 2018 NYS Mid-Amateur titles and the 2015 NYS Men’s Four-Ball title with Billy Hanes. Hanes, also of Crag Burn, will too advance to tomorrow’s final rounds after carding a six-over 150.

Speaking on his round today, Miller said, “I hit it well but putted poorly. The golf course was much easier today, just softer. I just got to go out and keep playing. Hopefully make some putts and be right there, if no one goes too low today.”

Defending Champion Will Thomson of Oak Hill Country Club put together a 150 in the opening rounds of this year’s championship. Still, Thomson feels confident going into tomorrow: “I’m going to try to shoot two low rounds tomorrow and come back and win.”

The two-round cut fell at 157, with 44 players advancing into tomorrow’s final rounds. The field will be repaired into twosomes based on scores for the final 36 holes, with pairings remaining the same through the finish.

Speaking on playing two full rounds in a day, Reichert said, “It’s going to be a grind for sure. Definitely a lot of golf left to be played; we are only halfway done. Just going to go home and collect myself. It is the same deal tomorrow.”

Hole-by-hole scoring will continue throughout tomorrow’s third and fourth rounds. Follow along as the field battles for the coveted Ganson Depew Cup.