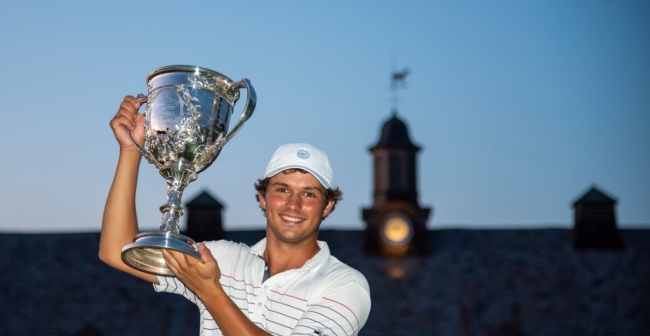 Reichert carded a one-over 73 in the fourth and final round on Thursday evening to finish at four-over 292 and secure his second NYS championship, the first being the 2015 NYS Boys’ Junior.

“It feels unbelievable. We looked at a four-shot lead at one point, and I made it a little harder on myself than I wish I would have. But, I was able to get it done and it’s all good now!” Reichert said.

Prior to the Men’s Am, Reichert won the 2019 Florida State Amateur Championship in a sudden-death playoff. Speaking on how that prepared him for this tournament, Reichert said, “100%. I knew exactly what I’d be feeling coming down the stretch. I knew how to handle it. Trust is the biggest thing. Trust what you do, and you can’t really go wrong.”

For the second year in a row, Chris Blyth of Mendon Golf Club finished as runner-up at five-over 293.

“To come up a shot short again this year is disappointing, but I can’t be too upset with the way I played. It’s always a lot of fun playing in this tournament. Coming in second this year and last year is an honor and hopefully next year, I will do better,” Blyth said.

Speaking on playing this event at his home course, Hejna said, “I think this place is fantastic. The course played great. I think it was a great event for the club and we were glad to host it.”

“I thought the course was awesome; it held up really well. We had all different types of weather so that was cool too, since we get that every day here,” Miller added. Thursday’s 36 holes were delayed twice due to inclement weather.

Rounding out the top five was Adrian Norford of Willowbrook Golf Club at seven-over 295. Prescott Butler of Piping Rock Club and Billy Hanes of Crag Burn finished T-6 at eight-over 296. Christian Chapman of Cobblestone Creek Country Club and Kyle Ritchie of Cherry Valley finished T-8 at 12-over 300. James McHugh of Rye Golf Club carded a 13-over 301 to earn tenth place.

Defending champion, Will Thomson of Oak Hill Country Club, finished the 72-hole tournament at 305 (T-18). The Top 20 will earn an exemption into next year's tournament.

Reichert begins his junior season on the University of Alabama-Birmingham’s men’s golf team in the next couple weeks. He will be back next summer to defend his Men’s Am title.