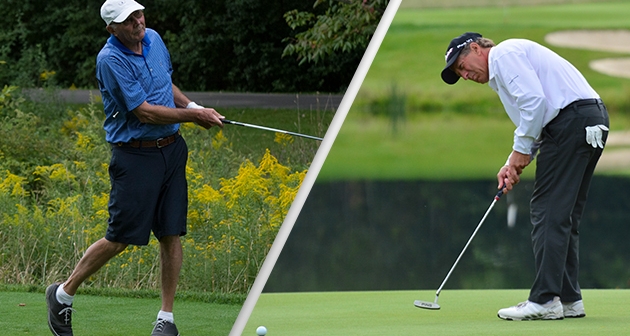 East Aurora, N.Y. – On another beautiful day at the picturesque Crag Burn Golf Club, David Prowler shot even par to capture the lead headed into tomorrow’s final round of the 61st NYS Men’s Senior Amateur Championship.

One stroke behind Prowler is Dennis Lynch, of the Nassau Players Club, who repeated with another 74 in today’s round for a 36-hole total of 148 (+4).

Joining Prowler and Lynch in the final pairing is first-round leader Glenn Stopera whose 77 today brought his score to 149 (+5).

Prowler, who teed off on the tenth hole today, steered through the course the past two days avoiding the trouble that’s easy to come by in the fescue and hazard-filled course. “In two rounds I’ve missed two fairways, one each day. I haven’t putted as well as I usually putt, but I’ve played nicely,” he elaborated.

The difference between him and fellow Bethpage State Park Golf Club player, Lynch, was a 20-foot birdie Prowler sunk on the 390-yard par-4 ninth hole.  “It’s always fun to birdie the last hole,” he said with a smile.

Lynch had plenty of scoring opportunities on the course today and didn’t miss a single green, leaving himself numerous putts for birdie inside of ten feet. What separated his 74 from a round in red numbers, were some missed opportunities on the putting green. “I missed six putts inside of five feet. I had better speed yesterday. I struck it well, I just didn’t putt very well today,” he noted.

With all three players in the final pairing striking the ball solidly, tomorrow may very well be a putting contest to decide the victor.

In the concurrent 22nd NYS Super Senior Championship, first round leader and defending champion, Jim Smith, carded another 72 today to remain at even par (144) and extend his lead to three strokes headed into tomorrow’s final round.

Robert Zeman, of Sodus Bay Heights Golf Club sits in the second spot at 147 (+3) and will join Smith in the penultimate pairing tomorrow afternoon.

Joining the duo in the division’s leader group is John Hamilton of Hudson National Golf Club, who carded the lone sub-par round in the Super Senior division through two rounds with a 1-under 71 today. The low score propelled him up the leaderboard, now tied for third at 148 after an opening round 77.

Tied with Hamilton is Frank Broderick, of Crag Burn, who claimed the Senior title in a playoff in 2013 at Normanside Country Club, shot another 74 today and has a two-round total of 148 (+4).

Smith, a longtime member of the host club, continued to strike the ball well again today and hit sixteen of eighteen greens. His scorecard included sixteen pars, one birdie and a bogey.

Where he struggled, if anywhere, was his inability to capitalize on the handful of chances he had for birdie from ten to fifteen feet.

“I had about eight or ten in there,” he said about the opportunities. “I didn’t make anything, which is unusual. I’m going to work on my putting a little bit this afternoon and see if I can get anything going.”

He did however knock down a fifteen-footer on the third hole, a 307-yard par 4. Coincidentally, his front nine score was identical to yesterdays with eight pars and a birdie on the same hole.

With a three-stroke cushion and an abundance of course knowledge, the championship is certainly Smith’s to win. In the 21 prior years of the championship’s history, three individuals have repeated the title. Smith could very well be the fourth to do so if he can continue his high-level play throughout tomorrow’s final round.

Tomorrow, the remaining competitors will play in threesomes from 8:00am to 9:50am. The Super Senior leader group will tee off at 9:40am and the Senior leaders at 9:50am.