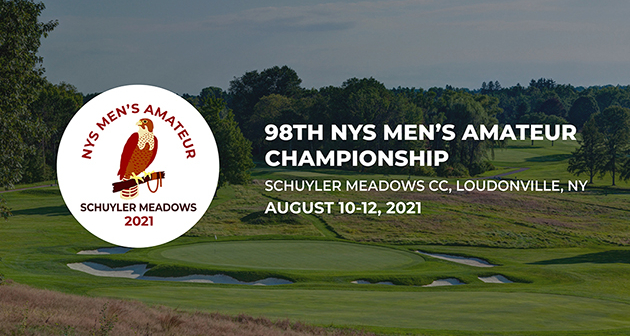 LOUDONVILLE, N.Y. – The upcoming 98th New York State Men’s Amateur Championship will be contested at Schuyler Meadows Club on August 10 – 12, 2021. A field of approximately 144 of the Empire State’s best male amateur golfers will compete in a 72-hole stroke play competition hoping to raise the Ganson Depew Cup on Thursday.

The Championship begins with two rounds of 18 holes across Tuesday and Wednesday. A cut ensues, to the low 40 players and ties, and anyone within 10 strokes of the lead. On Thursday, the remaining competitors will play 36 more holes to declare a winner. If a tie exists after 72 holes, a sudden-death playoff will follow.

Format: 72 holes of stroke play, played over three days with a 36-hole cut to low 40 and ties, and anyone within 10 strokes of the leader.

Eligibility: Entries are open to male amateur golfers who are either (1) residents of New York State or (2) members of an NYSGA Member Club and have an active Handicap Index of 8.4 or lower.

Past Men’s Am Champions

Doug Kleeschulte, 31, of Wiltwyck Golf Club, was crowned champion in 2010 at Albany Country Club with a one stroke victory over the field. He has appeared in a string of USGA championships over the years and most recently competed in the 2015 U.S. Four-Ball and U.S. Amateur.

Ben Reichert, 23, of NYSGA eClub - Western NY, won both the NYS Men’s Am at Crag Burn, along with the Florida State Amateur in 2019. More recently, he secured the 2021 Porter Cup at Niagara Falls Country Club, becoming the first player from the area to win the event in over 50 years. He participated in the 2020 and 2018 U.S. Amateur Championships. He also won the 2015 NYS Boys’ Junior Amateur title at Cedar Lake Club. He currently sits 427 in the World Amateur Golf Rankings, and is a redshirt Senior on the UAB men’s golf team.

Jeff Wolniewicz, 35, of Crag Burn Golf Club, won the 2008 title at Pinehaven Country Club, 5&4 when it still included a match play bracket. He won the 2017 N.Y.S. Men’s Amateur Four-Ball Championship at Leatherstocking Golf Club with his partner Jonathan Clark and earned the same title the year prior with a different teammate, now-professional Billy Gaffney. The Buffalo native was inducted into the Binghamton University Athletics Hall of Fame in 2018. He played on the men’s golf team from 2003-2007.

Christian Chapman, 22, of Cobblestone Creek CC, won the 2016 NYS Boys’ Junior Championship at Seven Oaks Golf Club. He won the Country Club of Rochester Invitation in 2021 and 2018. He was runner-up at the Hochster Memorial earlier this summer. He finished in the top ten in the 2019 championship, while recently finishing eighteenth in the Atlantic-10 Championship, and fourth in the Rochester District Championship. Chapman just graduated from St. Bonaventure, where he played on the golf team.

Michael Dwyer, 24, of Edison Club, won the 2021 NYS Men’s Four-Ball championship with partner Michael Stopera. The pair came back from a four-stroke deficit on the final day of the tournament at Leatherstocking Golf Course.

Charlie Fischer, 16, of East Aurora Country Club, recently had a successful defense of the Buffalo District Golf Association (BDGA) Boys’ Junior Stroke Play title, marking his second consecutive victory. He placed in the top ten at the 2021 International Junior Masters. He won the 2019 NYS Boys’ Sub-Junior, winning by five strokes to capture his first state championship after finishing runner-up in 2018.

Ryan Gabel, 35, of Trump National Golf Club Hudson Valley, teamed up with Nick Dilio in 2019 to win the NYS Men’s Four-Ball championship. He was a former member of the Binghamton University golf team.

Billy Hanes, 35, of Crag Burn Golf Club, finished second at the 2020 Buffalo District Golf Association Individual Championship and seventh at the 2021 championship. He won the 2018 NYS Men’s Amateur Four-Ball at Leatherstocking with his younger brother David, finishing at 11-under 133 to win by two. Hanes also claimed a NYS Boys’ Sub-Junior title in 2000 at Wellsville Country Club. He finished runner up at the 2018 NYS Men’s Mid-Am and in the top 10 at both the 2019 NYS Men’s Amateur & Mid-Amateur Championships.

Jamie Miller, 36, of Crag Burn Country Club, landed the 2018 and 2014 NYS Men’s Mid-Amateur titles. In 2015, he paired up with Billy Hanes to win the NYS Men’s Amateur Four-Ball at Leatherstocking Golf Club. Miller has competed in multiple national events, including the 2018 U.S. Mid-Amateur and the 2018, 2021 U.S. Four-Balls. This year, Miller teamed up with Chelsea Dantonio to win the NYS Amateur Mixed Team title. He finished T3 in the 2019 NYS Men’s Amateur at Crag Burn.

Michael Stopera, 32, of Edison Club, won the 2021 NYS Men’s Four-Ball championship with partner Michael Dwyer.  The pair came back from a four-stroke deficit on the final day of the tournament at Leatherstocking Golf Course.

Chris Blyth, 28, of Mendon Golf Club, finished runner-up at both the 2018 and 2019 NYS Men’s Amateur Championships. He won the 2018 Rochester District Golf Association Championship. Blyth graduated from St. John Fischer College, where he became one of the most decorated golfers in team history. During his collegiate career, Blyth was a three-time All American and guided the Cardinals to four NCAA Division III Men's Golf Championship appearances including three top-10 finishes.

Prescott Butler, 22, of Piping Rock Club, is a rising junior at Southern Methodist University. He finished sixth in the 2019 championship, and won the 2019 Long Island Amateur Championship. He’s currently ranked 1190 in the World Amateur Golf Rankings.

Shawn Colella, 18, of Bellevue Country Club, won the International Junior Masters earlier this summer and made the cut at the Boys’ Junior PGA Championship. He was the runner-up at the 2016 & 2017 NYS Boys’ Sub-Junior Championships. Colella, who regularly competes in Syracuse District events, was named SDGA Boys Player of the Year in 2016. He also won the three consecutive Syracuse District Junior Championships in 2016, 2017 and 2018. He’s set to join the Binghamton University men’s golf team in the fall.

Seth Conway, 18, of Corning Country Club, qualified for the 2021 U.S. Junior Amateur. He recently earned a T35 finish at the AJGA Junior Championship. He also finished T3 at the Billy Horschel Junior Championship, shooting six-under 210 in his 54 holes of play. The George Mason University commit was a top-ten finisher in the 2019 NYS Boys’ Junior and finished in third place at the 2017 NYS Boys’ Sub-Junior.

Christopher DeForest, 32, of Twaalfskill Golf Club, spent some time on the Korn Ferry Tour in 2012. DeForest appeared in the U.S. Open in 2011. He played golf at the University of Illinois. He was runner-up at the NYS Open at Bethpage Black in 2017, while still a pro.

Kyle Downey, 31, of Locust Hill Country Club, made the Round of 64 in the 2018 U.S. Mid-Amateur. He finished T16 in the 2019 championship. He was the low amateur at this year’s Western New York Open at Stafford Country Club.

Danny Gianniny, 22, of Country Club of Rochester, finished in the top 25 at the Atlantic 10 championship as a member of the St. Bonaventure men’s golf team. He recently participated in the Porter Cup, and won the International Junior Masters in 2017.

Jim Gifford, 34, of NYSGA eClub - Capital Region, qualified for the 2018 U.S. Mid-Amateur. He finished fourth at the 2019 NYS Men’s Mid-Amateur at Tuscarora Golf Club. In 2019, he won the Saratoga County Amateur. He was co-captain for Siena College in 2008-09, and Schuyler Meadows was his team’s home course.

Johnny Gruninger, 18, of Bellevue Country Club, is a top junior in Central New York, and recently won the Syracuse District Golf Association (SDGA) Junior Match Play, was low amateur in the CNY Open, and won the Onondaga G&CC Junior Invite. In 2020, he swept the SDGA majors including the Gerry Ashe Memorial, District Match Play, Junior Match Play which earned him both Player of the Year and Junior Player of the Year honors. He also won both the 2017 & 2018 Syracuse District Junior Classics.

Nathan Han, 20, of Salem Golf Club, recently finished fourth in the 2021 Florida Azalea Amateur. He finished third in the 2020 Westchester Amateur Championship, and third in the 2019 MGA Stroke Play Championship. He qualified for the U.S. Junior Am in 2018. He is a two-time NYSPHSAA New York State Boys’ champion (2017 and 2019), and two-time Met Boys’ Champion (2015 and 2016). He played on Columbia University’s men’s golf team in 2019-20, where he had the team’s best season stroke average as a freshman. He’s currently ranked 1597 in World Amateur Golf Rankings.

Ryan Hart, 19, of Country Club of Buffalo, is fresh off a win at the Buffalo District Golf Association’s Match Play Championship. He qualified for the US Junior Amateur, and won the College Prep Series at UF in 2019. He was named the 2017 Western New York Section PGA Junior Tour Player of the Year. He plays golf at the University of Florida.

Patrick Healy, 21, of Huntington Country Club, is a part of the men’s golf team at Columbia University. He recently won the 83rd Hochster Memorial Invitational at Quaker Ridge.

Jud Langille, 19, of Met PGA Junior Golf Club, participated in the 2019 US Amateur Four-Ball championship. He was the runner-up in the 2019 NYS Junior Amateur, and qualified for the 2018 US Junior Amateur. He won the Metropolitan Golf Association Boys’ Championship, the Westchester Boys’ Championship and was the Westchester Golf Association Junior Player of the year in 2017. He’s currently on the men’s golf team at Penn State University.

Arjun Puri, 22, of MGA eClub - New York City, competed in the 2016 U.S. Junior Amateur Championship, where he advanced to the round of 32. A recent graduate of Columbia University, Puri recorded the fourth-lowest round in school history (65) as part of a fifth place finish at the Doc Gimmler Intercollegiate Invitational.

Jeremy Sisson, 22, of Skaneateles Country Club, recently won the 63rd Apogee Investment Management (A.I.M) Championship. He qualified for the 2018 U.S. Junior Amateur and advanced into the match play side of the championship. Sisson was also the 2017 NYS Boys’ Junior runner-up, where he lost to Jude Cummings in a 4-hole playoff at Seven Oaks Golf Club. Sisson is entering his sophomore year and is on the University of Nebraska men’s golf team.

Evan Sitts, 20, of Oneota Country Club, won the Triple Cities Golf Association Amateur and Otsego County Amateur in 2020. He currently attends Binghamton University and plays on the men’s golf team. While at York College his freshman year, he was recognized in the top 150 of the Golfstat Division III Player Rankings.

As one of the premier golf clubs in the New York’s capital region, Schuyler Meadows boasts a magnificent 1926 design by the preeminent course architect Devereux Emmet.

Schuyler Meadows has hosted the NYS Women’s Amateur Championship three times, with the most recent championship taking place in 2017 (which also included the concurrent Mid-Am championship) as well as in 1976 and 1955. The club hosted its first state championship, the NYS Boys’ Junior Amateur in 1938.