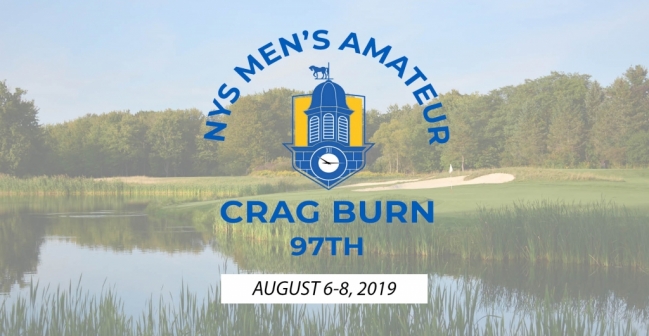 The championship begins on Tuesday with 18 holes of stroke play and the 138-player field will be divided into morning and afternoon waves. Wednesday, the field will play a second set of 18 holes to decide who survives the cut - set at low 40 players and ties, and anyone within 10 strokes of the lead. On Championship Thursday, the remaining competitors will play a final 36 holes to decide the next state champion. If a tie exists after 72 holes, a sudden-death playoff will determine the winner.

Format: 72 holes of stroke play, played over three days with a 36-hole cut to low 40 and ties, and anyone within 10 strokes of the leader.

Eligibility: Entries are open to male amateur golfers who are either (1) residents of New York State or (2) members of an NYSGA Member Club and have an active Handicap Index of 8.4 or lower.

Cut after 36 holes to low 40 players and ties, and anyone within 10 strokes of the lead

Past Men’s Am Champions

Will Thomson, 18, of Oak Hill Country Club, birdied the final hole to win the 96th New York State Men’s Amateur Championship. He also claimed back-to-back NYS Boys’ Sub-Junior Amateur titles in 2013 at Skaneateles Country Club and 2014 at Ridgemont Country Club. Thomson finished runner-up at the 2017 NYS Men’s Am by one stroke. The Pittsford player gained national attention after becoming the youngest player in history to qualify for the U.S. Amateur after doing so in 2014, at age 13. He recently finished her first season on University of Texas golf team. Thomson is currently ranked 473 on the World Amateur Golf Rankings (WAGR).

Doug Kleeschulte, 29, of Wiltwyck Golf Club, was crowned champion in 2010 at Albany Country Club with a one stroke victory over the field. He has appeared in a string of USGA championships over the years and most recently competed in the 2015 U.S. Four-Ball and U.S. Amateur.

Jeff Wolniewicz, 33, of Crag Burn Golf Club, won the 2008 title at Pinehaven Country Club, 5&4 when it still included a match play bracket. He won the 2017 N.Y.S. Men’s Amateur Four-Ball Championship at Leatherstocking Golf Club with his partner Jonathan Clark and earned the same title the year prior with a different teammate, now-professional Billy Gaffney. The Buffalo native was inducted into the Binghamton University Athletics Hall of Fame in 2018. He played on the men’s golf team from 2003-2007.

Billy Hanes, 33, of Crag Burn Golf Club, won the 2018 NYS Men’s Amateur Four-Ball at Leatherstocking with his younger brother David, finishing at 11-under 133 to win by two. Hanes also claimed a NYS Boys’ Sub-Junior title in 2000 at Wellsville Country Club. He finished runner up at the 2018 NYS Men’s Mid-Am.

David Hanes, 21, of Crag Burn Golf Club, collaborated with his older brother Billy for last year’s Men’s Four-Ball title. He’s also won both the 2018 Buffalo District Golf Association Match Play Championship and the Erie County Amateur. In 2016, he claimed the prestigious International Junior Master Tournament title at East Aurora Country Club and was the stroke play medalist. Hanes is entering his senior season on Canisius College men’s golf team, where he has been honored with 2016/2017 Canisius Male Rookie of the Year and 2017 & 2018 MAAC All-Tournament. The Elma native has played in four-straight Porter Cups.

Jamie Miller, 34, of Wanakah Country Club, landed the 2018 and 2014 NYS Men’s Mid-Amateur titles. In 2015, he paired up with Billy Hanes to win the NYS Men’s Amateur Four-Ball at Leatherstocking Golf Club. Miller has competed in multiple national events, including the 2018 U.S. Mid-Amateur and the 2018 U.S. Four-Ball.

Ben Reichert, 21, of River Oaks Golf Club, won the 2015 NYS Boys’ Junior Amateur title when it was held at Cedar Lake Club. He qualified for the 2018 U.S. Amateur at Pebble Beach Golf Links but failed to make the two-round cut. More recently, Reichert won the 2019 Florida State Amateur Championship in a sudden-death playoff. He is entering his junior season at the University of Alabama-Birmingham.

Chris Blyth, 26, of Mendon Golf Club, finished runner-up at last year’s NYS Men’s Championship. He lost to Thomson by one stroke after carding a six-under 282. He won the 2018 Rochester District Golf Association Championship. Blyth graduated from St. John Fischer College, where he became one of the most decorated golfers in team history. During his collegiate career, Blyth was a three-time All American and guided the Cardinals to four NCAA Division III Men's Golf Championship appearances including three top-10 finishes.

Justin Lane, 19, of Woodstock Golf Club, captured his four consecutive Ulster County Men’s Amateur golf championship this summer. He won the 2017 NYS Federation Title at Bethpage Black. The Mid-Hudson player will be entering his junior year as a member of the Binghamton University men’s golf team.

Ryan Rodriguez, 21, of The Golf Club at Mansion Ridge, won the 2013 MGA Boys’ Championship. The Highland Mills native is entering his senior season on the Binghamton University men’s golf team.

Jeremy Sisson, 20, of Skaneateles Country Club, recently won the 63rd Apogee Investment Management (A.I.M) Championship. He qualified for the 2018 U.S. Junior Amateur and advanced into the match play side of the championship. Sisson was also the 2017 NYS Boys’ Junior runner-up, where he lost to Jude Cummings in a 4-hole playoff at Seven Oaks Golf Club. Sisson is entering his first season on the University of Arkansas men’s golf team.

Kevin VandenBerg, 53, of Tuscarora Golf Club has built up a lengthy amateur golf resume over the years. He’s yet to capture a New York State title but has won a slew of Syracuse District events over the past few years. In 2016, he won the CNY PGA’s Central New York Open and qualified for the U.S. Senior Open as well as the US Four-Ball with partner and NYSGA Executive Director Bill Moore. More recently, he competed in the 2019 U.S. Senior Open, but failed to make the two-round cut.

In the late 1960s, Frank Goodyear Jr. and his family decided to turn their rarely used polo grounds into a golf course. The family hired Robert Trent Jones Sr. to design a course on the 190-acre field where “a group of friends could play golf”. On May 1, 1972, Crag Burn officially opened its doors. Through the years, many course improvements have been made to Crag Burn, including some commissioned by Robert Trent Jones’ son Reese Jones. The course has hosted many amateur events, beginning in 1986 with the New York State Men’s Mid-Amateur Championship. Crag Burn also hosted this event in 1999 and 2010. More recently, the club hosted the 2017 New York State Men’s Senior and Super Senior Amateur Championship.