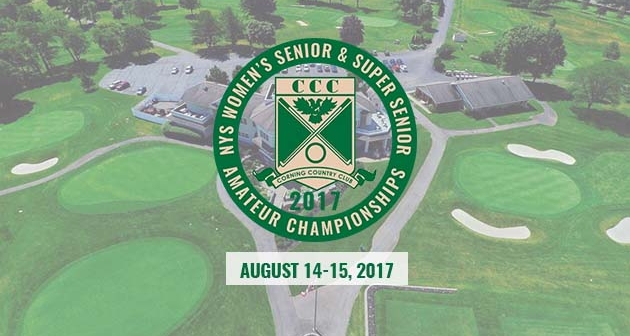 112 senior women from across the state will vie for the 2017 championship, which will be 36 holes of stroke play throughout two days of competition.

The NYS Women’s Super Senior Division will run concurrently for competitors 65 years of age and older, with 46 competitiors playing from the same tees as the Women’s Senior Division.

Both championships will play the 5,536-yard layout at par 74 throughout Monday and Tuesday’s rounds.

Mary Sicard, a resident of Lake George, is set to defend her title after winning the championship last year (her first year competing in the championship). The player out of Queensbury Country Club posted a two-round score of 151 (+5) at the Whiteface Club & Resort.

Kim Kaul is a two-time NYS Women’s Senior champion and has finished as runner-up in both the Women’s Amateur and Mid-Amateur. The Greater Buffalo Sports Hall-Of-Famer has qualified for the US Senior Women’s Amateur, USGA Women’s State championships and the US Women’s Four-Ball.

Nancy Kroll, was crowned NYS Women’s Senior champion in 2014 after a fifteen-year hiatus from golf and the following year won another NEWGA title at Normanside CC, her fifth time winning the championship.

Susan Kahler, of Ballston Spa Country Club, won the 2013 Championship at Wayne Hills Country Club by two strokes with a 36-hole total of 156 (+10).

Jan LaVigne, took home the trophy at the Whiteface Club in 2007 and plays her golf out of Ravenwood Golf Club.

Sue Sims, a three-time champ, won her trio of titles in the 90’s at Dutchess Golf and Country Club in ’93, again the following year at Cavalry Club and her final in ’96 at Lockport Town Country Club. The player out of Skaneateles Country Club, who’s also a NYSGA sectional affairs committee member, now competes in the Super Senior division.

Michelle Marquis, of Pompey Club, won the Senior title when the championship was held at the Country Club of Rochester in 2000. Fourteen years later, she took home the Super Senior title in 2014 at Kanon Valley Country Club and finished with a four-stroke advantage over the field of thirty-seven.

Cecily Havens, of Pompey Club, will attempt to capture her third consecutive NYS Women’s Super Senior title after winning last year at the Whiteface Club & Resort by five strokes with a 164 (+18) and the year prior at Thendara Golf Club with a two-round total of 155 (+9) to edge Sandra Wood by two strokes.

Gail Brophy, a legend in the amateur golf community who hails from Glens Falls, has won four NYS Amateur titles including two Women’s Amateurs in the early 60’s and two consecutive Super Senior titles in 2007-08 after a 42-year hiatus from the sport to take over the family business and raise a family. In her mid-seventies, Brophy continues to compete at the local and state level quite frequently.

Sharyn Costello, of Cornell University Golf Course, is also a three-time NYS champion and the only player to win the Women’s Senior and Super Senior in the same year. In 2012 at Shorewood Country Club, Costello finished three strokes ahead of the field with a 157 (+7). The following year, the Ithaca-native won her second consecutive Super Senior title at Wayne Hills Country Club.

Eligibility: Entries are open to female amateur golfers who are members of the NYSGA, are at least 50 years old as of August 14, 2017, with an active Handicap Index. For the NYS Women’s Super Senior, players must be at least 65 years old.

The club was stablished in 1919 and designed by Thomas Winston, a Scottish born greenskeeper who later pursued golf course design. The land acquired for the golf course was a farm, and the farmhouse was modified to become the course’s very first clubhouse (it was located behind number nine’s tee box). However, the clubhouse was destroyed by a fire during a renovation in 1951 and leveled to the ground. A second clubhouse was then build in July of 1952 on a different site, but was demolished in 1999 to make way for the modern facility that now stands today.

During the thirty years Corning Country Club held the LPGA Tour’s Corning Classic, over 3.8 million dollars in proceeds benefited local hospitals and camps for disabled children. Production and operation of the tournament was a community effort by the citizens of Corning and the title sponsor was Corning Incorporated, an American manufacturer of glass, ceramics and related materials, primarily for industrial and scientific applications.