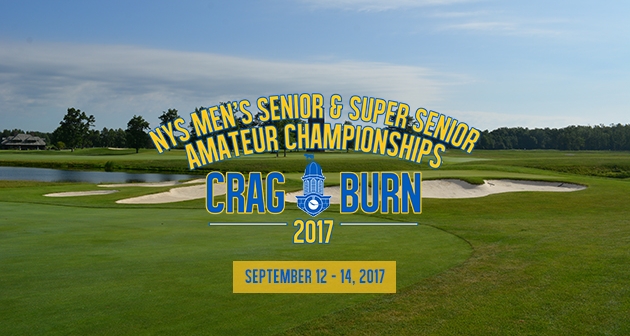 The championship begins on Tuesday with 18 holes of stroke play and the 132-player field will be divided into morning and afternoon waves. Wednesday, the field will play a second set of 18 holes to decide who survives the cut - set at low 50% of players and ties in each division (Senior and Super Senior). On Championship Thursday, the remaining competitors will play a final 18 holes to decide the next state champions in both divisions. If a tie exists after 54 holes, a sudden-death playoff will determine the winner.

Paul Pratico, of Schenectady Muni Golf Course, will defend his title after winning last year’s championship at Brookfield Country Club by three strokes over the field. Pratico’s win last year earned him an exemption into this year’s NYS Men’s Amateur at Bethpage Black where he competed among the top amateurs in the state.

Tom Fletcher, of Tuscarora Golf Club, won the championship with a birdie on the second playoff hole in 2015 at Onondaga Golf & Country Club against Don Enga of Cherry Valley Club.

Frank Broderick, of Crag Burn Golf Club, won the championship in 2013 when it was held at Normanside Country Club in a playoff against eventual Super Senior winner Earl Winchester, who both finished tied for 217 (+7).

Matthew Haefele, of Stafford Country Club, was the champion when it was held at his home club in 2009.

Jim Smith, of Crag Burn Golf Club, will defend the Super Senior title on his home course. Last year, he won by a stroke over the field at Brookfield Country Club. His 4-over par finish, was the lowest winning total in relation to par in the 21 years of the championship’s history.

Kevin Webb, of Mendon Golf Club, and Robert Branham, of Canasawacta Country Club, teamed up towin the Men’s Senior Four-Ball championship earlier this season at Leatherstocking Golf Course with a two-round total of 136 (-8).

Todd Dischinger, of Foxfire Golf Course,was the Men’s Amateur champion in 1992 when it was hosted by Drumlins Country Club (East).

Format: 54 holes of stroke play, played over three days with a 36-hole cut to low 50% and ties in each division.

Eligibility: Entries are open to male amateur golfers who are members of the NYSGA and have an active Handicap Index of 12.0 or less (at the time of entry), issued by a golf club which is licensed to use the USGA Handicap System. A member of the NYSGA is defined as a dues paying member of a NYSGA member club, which includes NYSGA eClubs.

Crag Burn Golf Club, located outside of Buffalo in East Aurora, has become well known over the years for its diverse landscape, lush green fairways, towering trees and tall meadow fescues. For over 40 years, the club has earned a reputation as one of Western New York’s premier golf clubs.

The meticulously-designed Robert Trent Jones layout is complimented by a state-of-the-art practice facility, regarded by many as one of the best around. The course is unique in that almost half of the holes play through dense woods and the remaining half is on open meadowland, giving golfers the best, or worst, of both worlds.

The name stems from the Scottish words “Crag” meaning “top of the bluff,” and “Burn,” which translates to “small stream.” The property’s original owners, who transformed the land into a summer estate, built an extravagant house with over sixty rooms accompanied by stables, service buildings, polo fields and bridle paths in 1929.

A few decades later, in late 1960’s, the family decided to convert 190 acres of their property into a golf course. They recruited a group of family and close friends to help fundraise the course construction. This group became the club’s founding members.

Construction began in 1970 and was finished two years later when the course was finally opened for play.

Today, Crag Burn continues the tradition and beliefs its founders envisioned; simply a place where good friends can gather and play golf on a challenging and beautiful course.