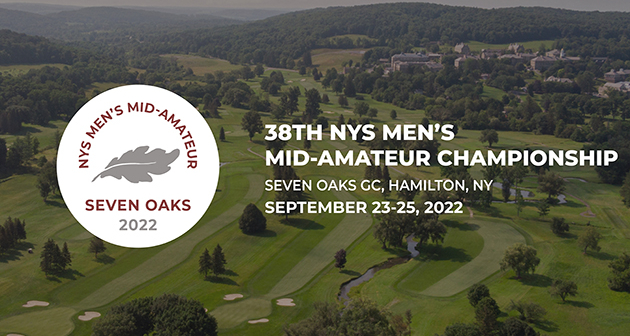 HAMILTON, N.Y. – The upcoming 38th annual New York State Men’s Mid-Amateur Championship at Seven Oaks Golf Club will challenge the best male amateurs, ages 25 and up, from around the state throughout 54 holes of stroke play over three days from September 23 – 25, 2022.

The championship begins on Friday with 18 holes of stroke play, with a cut applied to low 60 players and ties afterwards. After a second round of 18 holes on Saturday, the field is cut again to the low 30 and ties. The remaining competitors will play the final 18 holes on Sunday to decide the next state Mid-Amateur champion. If a tie exists after 54 holes, a sudden-death playoff will determine the winner.

Eligibility: Entries are open to male amateur golfers, ages 25 and older, who are either (1) residents of New York State or (2) members of an NYSGA Member Club, and have an active Handicap Index of 10.4 or lower.

Luke Hobika, 54, of Yahnundasis Golf Club, is a two-time NYS Men’s Mid-Amateur champion, having won the championships seventeen years apart, first in 1998 at Yahnundasis Golf Club at age 30 and again in 2015 at Wolferts Roost Country Club. He most recently won the 60th Post-Standard Amateur Championship at Tuscarora Golf Club in 2016 for his fifth title in nearly twenty years. He was inducted into the Syracuse District Golf Association Hall of Fame in 2022.

Carl Schimenti, 30, of Cornell University Golf Course, claimed the 2021 title at Shaker Ridge during a two-hole playoff against Chris Blyth. He teamed up with Andrew Turker of his club to win the 2022 NYS Men's Four-Ball at Leatherstocking in May, his second consecutive NYSGA victory. Schimenti also claimed the 2021 Tompkins County Amateur.

Jimmy Welch, 55, of Olde Kinderhook, won the 2011 championship at Dutchess Golf and Country Club. He captured the 2022 Saratoga County Amateur. He participated in the 2019 U.S. Mid-Amateur, his first USGA championship.

Ben Bates, 41, of NYSGA eClub - Capital District, won the 1997 NYS Boys’ Junior at Shaker Ridge. He played collegiately at Skidmore College, and has captured numerous club championships at Mohawk Golf Club, and multiple Schenectady Classic titles as well, including a victory in 2022.

James Blackwell, 28, of River Oaks Golf Club, won the 2011 New York State Boy’s 18U Junior Amateur Championship at McGregor Links Country Club. He followed that title up, by winning the 2012 BDGA Championship. He competed at the collegiate level on the Ball State men’s golf team. He returned to his alma mater as a graduate assistant coach in 2018. He recently competed in the 2022 Men's Porter Cup Invitational at Niagara Falls, where he was tied for the lead after round 1. He also finished T5 at the 2022 NYS Men’s Amateur Championship at Onondaga, shooting three of four rounds under par.

Ryan Gabel, 36, of Trump National Golf Club Hudson Valley, teamed up with Nick Dilio in 2019 to win the NYS Men’s Four-Ball championship. He’s a former member of the Binghamton University golf team. Gabel qualified for his first USGA championship in 2022, and competed in the U.S. Mid-Am at Erin Hills.

Billy Hanes, 36, of Crag Burn Golf Club, won the 2018 NYS Men’s Amateur Four-Ball at Leatherstocking with his younger brother David, finishing at 11-under 133 to win by two. He also won the 2015 title with partner Jamie Miller. Additionally, Hanes claimed the NYS Boys’ Sub-Junior title in 2000 at Wellsville Country Club. He finished runner up at the 2018 NYS Men’s Mid-Am and in the top 10 at both the 2019 and 2021 Mid-Amateur Championships. In 2022, he won both the Erie County Amateur and the BDGA Match Play.

Doug Kleeschulte, 32, of Wiltwyck Golf Club, was crowned the Men’s Amateur champion in 2010 at Albany Country Club with a one stroke victory over the field. He has appeared in a string of USGA championships over the years and most recently competed in the 2015 U.S. Four-Ball and U.S. Amateur.

Daniel Russo, 64, of Schuyler Meadows Club, won two consecutive NYS Senior Amateur titles, in 2021 and 2019. He competed in his first state senior in 2018, finishing T9. He’s qualified for the U.S. Senior Open twice (2017, 2009), and the 2015 U.S. Senior Amateur. He won the 2020 Society of Seniors Dale Morey championship and finished T7 in the Golfweek Senior Challenge Cup. At the 2019 NYS Men’s Mid-Amateur, he finished in fifth. He most recently competed in the U.S. Senior Am at Country Club of Detroit, advancing as far as the Round of 16.

Michael Stopera, 33, of Edison Club, won the 2021 NYS Men’s Four-Ball championship with partner Michael Dwyer.  The pair came back from a four-stroke deficit on the final day of the tournament at Leatherstocking Golf Course, by shooting 10-under 62 to win by a stroke.

Andrew Turker, 38, of Cornell University Golf Course, claimed his first New York State Title at the Men’s Four Ball Championship earlier this summer. Turker was co-captain of the Cornell University men’s golf team during his college years. He contributed to an interclub title for his home course at Lakeshore Golf and Country Club. He now works in the athletic department at his alma mater.

Kevin VandenBerg, 56, of Beaver Meadows Golf Club, cruised to a nine-stroke victory at the 2022 NYS Men’s Senior Amateur at Springville, and was the runner-up during his first appearance in 2021. He captured the 2022 Senior Porter Cup at Niagara Falls Country Club, and qualified for the last two U.S. Senior Amateurs in his first two years of eligibility (2021-22). He's qualified for two U.S. Senior Opens (2016, 2019). In June, he won the Golfweek Senior National Championship held in North Carolina. Last year, he won the Sunnehanna Senior Invitational. Locally, he's won the last two SDGA Senior Stroke Play titles, and was voted the 2021 SDGA Senior Player of the Year. He's also won the CNY PGA's Post-Standard three times, and captured two SDGA Gerry Ashe Memorial titles in 2009 and 2017.

Jeff Wolniewicz, 36, of Crag Burn Golf Club, won the 2008 Men’s Amateur title at Pinehaven Country Club, 5&4 when it was still a match play format. He won the 2017 N.Y.S. Men’s Amateur Four-Ball Championship at Leatherstocking Golf Club with partner Jonathan Clark and earned the same title the year prior with a different teammate, now-professional Billy Gaffney. The Buffalo native was inducted into the Binghamton University Athletics Hall of Fame in 2018. He played on the men’s golf team from 2003-2007.

Kyle Downey, 33, of Locust Hill Country Club, competed in the 2021 Men’s Amateur and led after the first two rounds. He finished tied for seventh place. He was the runner-up at the 2018 NYS Mid-Am. Earlier this season, he fired at 2-under 69 at Mohawk Golf Club to qualify for the 41st U.S. Mid-Amateur Championship. He previously qualified for the U.S. Mid-Am in 2018.

Jim Gifford, 35, of Mohawk Golf Club, qualified for the 2018 U.S. Mid-Amateur. He finished fourth at the 2019 NYS Men’s Mid-Amateur at Tuscarora Golf Club and tied for third in 2016. In 2019, he won the Saratoga County Amateur. In last year’s NYS Men’s Amateur, he tied for seventh. He co-captained the Siena College men’s golf team in 2008-09.

Darin Goldstein, 41, of Deepdale Golf Club, won the 2022 Long Island Amateur, and finished runner-up in 2021. He was also the low amateur during the 2021 Long Island Open after forcing a playoff with eventual winner Andrew Svoboda. He won the 2017 Met Mid-Amateur championship, and was voted the Metropolitan Golf Association’s Player of the Year in 2018. He was the runner-up during the NYS Men’s Mid-Am in 2017 at Yahnundasis. He’s qualified for several U.S. Amateur and Mid-Amateur championships in recent years.

Brad Monroe, 29, of Onondaga Golf & Country Club, has cemented himself as one of the top players in Central New York in recent years. This season he won the 2022 SDGA Mid-Amateur and the CNY PGA’s AIM Championship. He also collaborated with Kevin VandenBerg to win the SDGA Four-Ball and advance to match play at this year’s US Amateur Four-Ball. He was voted the Syracuse District Golf Association’s player of the year in 2021, after finishing 3rd in the NYS Four-Ball, T12 at the NYS Mid-Am, runner-up at the SDGA Gerry Ashe Memorial, and 3rd at the AIM Championship. He won his first SDGA major in 2017, claiming the District Match Play title.

Bill Moore, 48, of Bellevue Country Club, finished in the top-10 during the 2021 championship after co-medaling in the Last Chance Qualifier. He also marked a top-10 result in 2018 at Wanakah. Locally, Bill has won the CNY PGA’s Emmett Kelly Masters in 2020, SDGA District Match Play titles in 2014 and 2011, and two Gerry Ashe Memorials titles in the early 2000s. Bill is currently in his twentieth year as the NYSGA’s Executive Director.

Jimmy Pizzutelli, 38, of Park Country Club, finished tied for fourth at the 2021 championship, and was tied for the lead after round 1. He won the 2021 BDGA Four-Ball with partner Dan Misko, and is currently on the Buffalo District board. He finished in third place at the 2022 BDGA Mid-Am.

Carter Thompson, 26, of MGA eClub – NYC,finished in the top-20 at the NYS Men’s Am to earn an exemption into the Mid-Am.

Seven Oaks Golf Club has a rich history which dates back to 1916 when a group of faculty at neighboring Colgate University and some townspeople met to form a local golf club.

This first nine-hole layout, named Hamilton Golf Club was built in 1917-18 and was located on the upper portion of the hill behind the student dormitories.

In 1927, New York City’s Thomas Winston was hired to redesign the original layout. With the transition came a renaming of the course to Seven Oaks in honor of the ancestral home of the Colgate family in England.

Less than ten years later, in 1934, a proposal was made to construct an 18-hole course on the newly-acquired Dunn Farm (where holes 1-12 are currently located). Gene Sarazen was brought on to help design the course, along with a young architect named Robert Trent Jones. Sarazen wanted to create his concept of an “Augusta of the North.”

After decades of struggles to get the project approved, the university found a way to fund the project, and had recently acquired some new essential property, which finally led to the new course’s construction.

The first nine was completed in 1958 and the second nine in 1965. The original course on the hill was closed and the name transferred to the new, modern-day Seven Oaks Golf Club.

The brook-laden Robert Trent Jones original presents a great challenge for any player that navigates the tricky layout.

Past NYS Championships at Seven Oaks