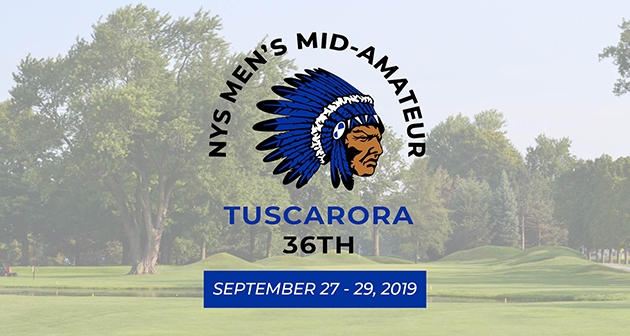 MARCELLUS, N.Y. – The upcoming 36th annual New York State Men’s Mid-Amateur Championship at Tuscarora Golf Club will challenge the best male amateurs, ages 25 and up, from around the state throughout 54 holes of stroke play over three days from September 27 – 29, 2019.

The championship, conducted by the New York State Golf Association, begins on Friday with 18 holes of stroke play and the 141-player field will be divided into morning and afternoon waves, with a cut applied to low 60 players and ties. Saturday, the field will play a second set of 18 holes to decide who survives another cut – set at low 30 players and ties. On Championship Sunday, the remaining competitors will play a final 18 holes to decide the next state Mid-Amateur champion. If a tie exists after 54 holes, a sudden-death playoff will determine the winner.

Jamie Miller of Wanakah Country Club won in a two-hole playoff. He will not be defending his title this year, as he is competing in the Crump Cup at Pine Valley Country Club this weekend.

Eligibility: Entries are open to male amateur golfers, ages 25 and older, who are either (1) residents of New York State or (2) members of an NYSGA Member Club, and have an active Handicap Index of 9.4 or lower.

Jim Scorse, 54, is a two-time winner of the championship and five-time state titleholder. His most recent Mid-Am victory came in 2016 at Stafford Country Club. Scorse won his first Mid-Am title at Onondaga Golf and Country Club in 2013. He captured his lone Men’s Am title in 2005 at Brookwoods Country Club (when the format still involved match play). He also won consecutive Men’s Four-Ball titles in 2011 and 2012 at Ravenwood Golf Club. This summer, he qualified for the U.S. Mid-Amateur and 2019 U.S. Four-Ball this summer.

Jimmy Welch, 52, of Olde Kinderhook Golf Club, captured the title in a four-way playoff in 2011 at Dutchess Golf & Country Club. Due to inclement weather over the weekend, the second round was cancelled, making the tournament 36-holes.

Luke Hobika, 51, of Cavalry Club, is a two-time NYS Men’s Mid-Amateur champion, having won the championships seventeen years apart, first in 1998 at Yahnundasis Golf Club at age 30 and again in 2015 at Wolferts Roost Country Club.

Ken Riter, 56, a NYSGA eClub member out of Western NY, claimed the title in 2009 at Glens Falls Country Club.

Jonathan Clark, 27, of Crag Burn Golf Club, collaborated with Matt Stasiak to capture a NYS Men’s Amateur Four-Ball Championship in 2013 at Leatherstocking Golf Club with a two-round best-ball score of 128 (-16).

Adam Condello, 36, of Locust Hill Country Club, earned his first state title at the 2017 NYS Men’s Amateur at Bethpage State Park’s formidable Black Course where he edged the field by one stroke and finished at 3-under 281. Condello has finished runner-up at the NYS Mid-Am in three of the last six years. Last summer, he was the leader through the opening two rounds of the NYS Men’s Am at Irondequoit, but struggled on the last day to finish in eighth.

Tom Fletcher, 62, of Tuscarora Golf Club, won the 2015 championship with a birdie on the second playoff hole at Onondaga Golf & Country Club against Don Enga of Cherry Valley Club.

Billy Hanes, 33, of Crag Burn Golf Club, was last year’s runner-up, losing in a sudden-death playoff to Jamie Miller. He won the 2018 NYS Men’s Amateur Four-Ball at Leatherstocking with his younger brother David, finishing at 11-under 133 to win by two. Hanes also claimed a NYS Boys’ Sub-Junior title in 2000 at Wellsville Country Club.

Brett Cooper, 28, of Sewane Golf & Country Club, won the 2016 Richardson Memorial Invitational and was runner-up during his defense of the title on his home course in 2017. In 2018, he finished top-5 at the Havemeyer Invitational, a top-15 finish at the Stocker Cup Championship, and a top-15 finish in the NYS Men’s Mid-Amateur.

Kyle Downey, 30, of Locust Hill Country Club, was in the 2017 final-round leader group with Keegan and (Darin) Goldstein, and eventually fell to fourth. In 2018, he finished as runner-up in the Rochester District Amateur at Monroe Golf Club and qualified for the 2018 U.S. Mid-Amateur, where he advanced to the match play Round of 64. During the 2018 NYS Mid-Am Championship, he was the first-round leader after posting a 4-under 68 at Wanakah Country Club.

Jim Gifford, 32, of NYSGA eClub - Capital District, qualified for the 2017 US Amateur Four-Ball championship alongside partner Chad Stoffer. In the 2016 NYS Mid-Amateur, Gifford finished in a four-way tie for third at 217 (+1). In the 2016 Men’s Amateur, Gifford tied for fourth at 1-over 285.

Jeff Hatten, 29, of MGA eClub – NYC, is a former professional who regained his amateur status. He finished T14 in this year’s NYS Open at Bethpage. He grew up in Connecticut, and competed for their USGA Men’s State team in 2012. He was the low amateur at the 78th Connecticut Open. He was runner-up in the 2009 Connecticut State Amateur. He attended Yale and played on the Men’s Golf team where he was a captain, and graduated in 2012.

Bradford Tilley, 36, of Sleepy Hollow Country Club, advanced to match play during the 2017 and 2018 U.S. Mid-Amateurs. He was the stroke-play medalist during the 2017 event and advanced into the semifinals. He regained his amateur status in 2016 after competing professionally for eight years. He played golf for University of Virginia from 2003-06. He finished as runner-up in the 2017 MGA Mid-Amateur.

Kevin Vandenberg, 53, of Tuscarora Golf Club, has built up a lengthy amateur golf resume over the years. He’s yet to capture a New York State title but has won a slew of Syracuse District events over the past few years. He qualified for this year’s U.S. Senior Open as well as in 2016. That year, he won the CNY PGA’s Central New York Open and qualified for the US Four-Ball with partner and NYSGA Executive Director Bill Moore. Prior to moving to New York, he was a resident of Michigan where he claimed a Golf Association of Michigan Championship title, a Michigan Amateur title as well as Mid-Amateur title in the early 2000’s.

Devlin Walsh, 33, of Shawangunk Country Club, finished in third at the 2017 Mid-Am at Yahnundasis Golf Club. He was the runner-up to Justin Lane in the 2018 Herdegen (Ulster County).

In 1923, a group of businessmen and professionals from Syracuse wanted to form a golf club in the area. The idea was to create “a club within the means of the average golfer where golf will be of primary importance.” The name “Tuscarora” stems from a group of fierce Indians, the Tuscarora’s, who once settled the land in Central New York.

The course was laid out on the gently rolling hills of Marcellus by noted Scottish course architect, Seymour Dunn, and was later tweaked by the famed Robert Trent Jones in 1929-30. The layout’s tree lined fairways and small and fast greens challenge golfers of all abilities. The course is set up at 6,275 yards and is played to a par of 71.