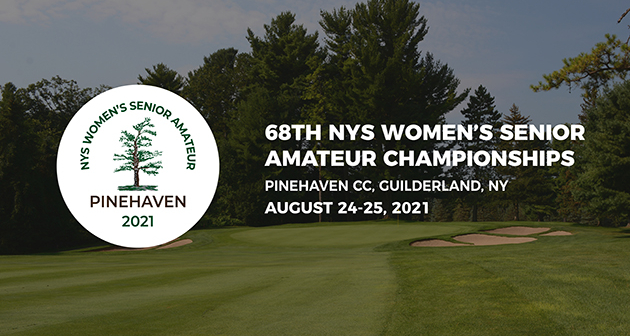 GUILDERLAND, N.Y. – The upcoming 2021 New York State Women’s Senior & Super Senior Amateur Championships are set to challenge many of the best senior women amateur golfers around the state over 36 holes of stroke play from August 24-25 at Pinehaven Country Club in Guilderland, NY.

Format: 36 holes of stroke play, played over two days of competition in a shotgun format.

Schedule of Events (As of August 22):

Past Women’s Senior Champions in the Field

Tammy Blyth, of Monroe Golf Club, made par on the second hole of a playoff to win the 2018 NYS Women’s Senior Amateur Championship at Thendara Golf Club over Kim Kaul and Sue Kahler. The three past champions finished the 36-hole tournament tied at 156. She finished T5 in the 2019 championship.

Susan Kahler, of Ballston Spa Country Club, won the 2013 NYS Women’s Senior Amateur. She also has two NYS Senior Mixed Team titles (2013, 2014) under her belt, where she won with her brother, Gary. Kalher has won 21 club championships at Ballston Spa, and is currently an assistant women’s golf coach at Union College.

Kim Kaul, of East Aurora Country Club, is a two-time NYS Senior Women’s Amateur champion (2008, 2015) and took home runner-up honors in the 2015 and 2018 NYS Women’s Mid-Amateur. A member of the Greater Buffalo Sports Hall of Fame, Kaul has been named Buffalo District Golf Association Player of the Year three times and placed second in the 2005 NYS Women’s Amateur.

Mary Sicard, of Queensbury Country Club, won her third NYS Women’s Senior Amateur championship in 2019 at Bristol Harbour. Her other two titles came in back-to-back in 2016 & 2017, in her first two years competing in the field.

Past Women’s Super-Senior Champions in field

Other NYSGA Champions in Field

Pennie Carlo, of Crestwood Golf Club, captured her first NYS title in 2019 at the Women’s Four-Ball Championship at Ravenwood Golf Club with partner Lauren Cupp. She qualified for the 2019 U.S. Senior Women’s Amateur and qualified out of Tuscarora Golf Club.

Karen Feldman, of Olde Kinderhook Golf Club, teamed up with Patricia Mayne earlier this summer to capture her first NYS title at the Senior Women’s Four-Ball championship at Lakeshore Yacht and Country Club.

Mary Jo Kelly, of Wolferts Roost Country Club, won the NYS Women’s Amateur in 1980 at Foxfire GC and was runner up at Kingswood Golf Course in 1999, having had major success on the local level. She’s been women’s club champion over thirty times at Wolferts Roost, and has won six Northeastern Women’s Golf Association (NEWGA) championships. In 2015, Kelly earned a berth into the U.S. Senior Amateur at the Hillwood CC in Nashville, Tenn. She returned to the NYSGA circuit last year, finishing tied for ninth in the Mid-Am at her home club and as runner-up in the Women’s Senior at Corning Country Club.

Patricia Mayne, of Western Turnpike Golf Course, won her first state title earlier this summer at the Senior Women’s Four-Ball championship with teammate Karen Feldman. She finished T5 in the 2019 championship and T6 in 2015. She’s earned other top ten finishes in the past as well, placing T-5 in 2014 and T-6 in 2013.

Others to Watch in Senior Division

Nikki Fowler, of Stone Creek Golf Club, finished T14 in the 2019 championship. She finished in the top 20 at the 2021 NYS Women’s Mid-Amateur Championship at Teugega Country Club.

Sandra Jackson, of Whippoorwill Club, finished in fifth in the 2018 championship at Thendara. She qualified for the 2014 U.S. Senior Women’s Amateur at Hollywood Golf Club in New Jersey. In the 2019 championship, she finished T12.

Carolyn Mancini, of Binghamton Country Club, finished fourth in the 2019 championship, and was co-runner-up in the 2018 championship. She finished in a three-way tie after 36 holes at 156 with Tammy Blyth and Kim Kaul.

Mary Scatena, of Pinehaven Country Club, won the 2019 Schenectady Classic in a playoff over Nancy Kroll. She finished eighth in the 2019 championship.

Penny Schiek, of Hiland Park Country Club, finished tied for runner-up honors in the 2019 championship at Bristol Harbour. She teamed up with Kelly Dempsey to win the net title at the 2019 NYS Women's Four-Ball Championships.

Others to Watch in Super Senior Division

Jo Ann Shupe, of Beaver Meadows Golf Club, finished tied for third in the 2019 championship. She also won the Super Senior title in the 2020 in the Rome City Women’s Amateur Golf Tournament.

Marianne Springer, of Edison Club, competed in the 2018 U.S. Senior Women’s Amateur. She finished second in the 2011 Women’s International Four-Ball.

Pinehaven Country Club is a private golf club located in Guilderland, New York, located just west of Albany. Opened in 1960, the club is currently celebrating its 61st year of operation. The course’s demanding 6500 yard layout is carved through the pine barrens of the historic pine bush area of Albany County. Over the past several years, the club has undertaken a number of course renovation projects. The master plan, directed by noted course architect Rick Jacobson, made what was already one of the most beautiful and challenging courses in upstate New York even more so.

Pinehaven’s sand base course cushions golfers steps and offers speedy drainage, forcing virtually no course closure due to rainy weather. Pinehaven is usually the first course to open in the Spring and the last to close in the Fall, providing members with many months of fine golf.

Pinehaven’s state of the art electronic irrigation system completely waters tees, greens, fairways and rough making all 18 holes as beautiful as they are challenging.