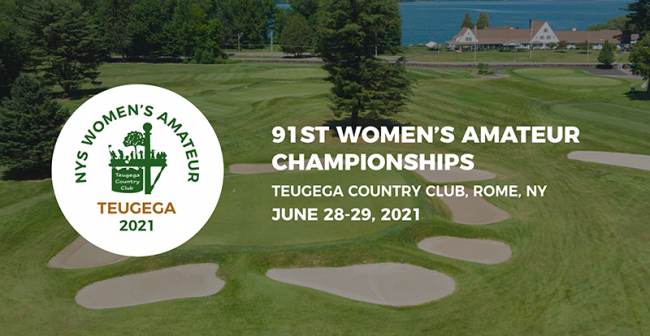 The field is set at 69 players divided into two divisions: Amateur and Mid-Amateur (25+ years old). The Championships will run concurrently from Monday through Tuesday’s finish with tee times off both sides (#1 and #10), for the first round of the championship in groups of three competitors. After 18 holes of stroke play, a cut will be applied to the Amateur Division to the low 50% of the field in each division and anyone within 10 strokes of the lead. The remaining field will be paired together based on division as well as score, and will tee off from #1 in twosomes to finish the championship, completing 54 holes overall. The Mid-Amateur field will play 36 holes (18 holes each day), without a cut.

Amateur: 54 holes of stroke play, played over two days. Field will be cut to low 50%, as well as anyone within 10 strokes of the lead after 18 holes.

Mid-Amateur: 36 holes of stroke play over two days, without a cut.

Eligibility: Open to female amateur golfers who are members of the NYSGA and have an active Handicap Index issued by a golf club which is licensed to use the USGA Handicap System. To be eligible for the Mid-Amateur, golfers must have reached their 25th birthday by June 28, 2021.

Ties: In the event of a tie for either Championship, a sudden-death playoff will be held immediately following play.

Kyra Cox, 21, of Centennial Golf Club, is a two-time Women’s Amateur Champion. In 2015, Cox captured the title at Tuscarora Golf Club by two strokes, becoming one of the youngest golfers to win the championship (15 years old). In 2018, Cox secured her second title by seven strokes at Yahnundasis Golf Club. She has gained national attention in the last couple of years after qualifying for the Drive, Chip & Putt National Finals in 2015 and competing in the US Girls’ Junior, US Women’s Amateur and Girls Junior PGA Championship in 2016. In 2017, she qualified for the Junior PGA Championship and the AJGA Girls Championship. More recently, Cox competed in the Women’s Porter Cup. The 21-year-old just wrapped up her junior season on the Furman University women’s golf team in Greenville, South Carolina.

Chelsea Dantonio, 23, of Crag Burn Golf Club, recently captured the 2021 NYS Mixed Team title with her partner Jamie Miller, marking Dantonio’s first NYS title. She’s finished runner-up in the last two Women’s Amateur tournaments. In the 2019 Women’s Amateur, Dantonio shot a 65 in her final round to force a playoff, climbing her way from seven strokes back entering the round. She competed in both the Western Women’s Amateur, finishing as a quarterfinalist, and the Women’s Porter Cup, where she earned runner-up honors, shooting one-under 215.

Jennifer Rosenberg, 21, of Glen Oaks Club, won the 2019 NYS Women’s Amateur, defeating Chelsea Dantonio in a playoff. Rosenberg recently graduated from Tulane University, enjoying a decorated career as a member of the women’s golf team. She led the team with a 74.74 stroke average over 29 collegiate events. In her senior season, she finished tied for ninth at the AAC Championship. In her sophomore season, Rosenberg became the first Tulane golfer in program history to earn all-conference recognition from the American Athletic Conference. Prior to college, the Laurel Hollow native placed T-3 at the 2017 NYSPHSAA Girls Golf Championship, posting the lowest 36-hole score for a Long Island player in the 12-year history of the event.

The 11th NYS Women’s Mid-Amateur Championship field contains a wide array of past New York State champions including past winners of the Women’s Amateur, Mid-Amateur and Women’s Senior:

Pennie Carlo, 55, of Crestwood Golf Club, captured her first NYS title earlier this summer at the Women’s Four-Ball Championship at Ravenwood Golf Club with partner Lauren Cupp. The Rome resident competed in the 57th US Women’s Senior Amateur in 2018.

Lauren Cupp, 36, of Rome Country Club/Yahnundasis Golf Club, claimed the 2017 Women’s Mid-Amateur at Schuyler Meadows Club by one stroke. Cupp captured her second NYS title in 2019 at the Women’s Four-Ball Championship with partner Pennie Carlo. Cupp is the head men’s and women’s golf coach at her alma mater, Hamilton College in upstate New York. In 2015, Cupp finished runner-up in the Speedgolf World Championships at The Glen Club in Illinois, shooting a 21-over 93 in only 58 minutes. She won the event in 2018, alongside her husband, Wesley, who won the Men’s division. Cupp finished T-2 at the 2018 Mid-Amateur Championship. She will be paired with two other multiple NYS title winners in Jenna Hoecker and Christy Schultz.

Jenna Hoecker, 28, of Brook-Lea Country Club, will be back to defend the Mid-Amateur title, having won the last two. She captured the championship by 10 strokes in 2018, then again in 2019 by 11 strokes. Hoecker won the Women’s Amateur in 2013 at the Country Club of Ithaca.

Kim Kaul, 62, of East Aurora Country Club, is a two-time NYS Senior Amateur champion (2008, 2015) and took home runner-up honors in the 2015 and 2018 NYS Women’s Mid-Amateur. A member of the Greater Buffalo Sports Hall of Fame, Kaul has been named Buffalo District Golf Association Player of the Year three times and placed second in the 2005 NYS Women’s Amateur.

Julie Murphy, 40, of Brookfield Country Club, finished runner-up at the 2017 NYS Women’s Mid-Amateur. She captured the 2017 NYS Mixed Team Amateur Championship with her husband, Michael, on the third playoff hole at Skaneateles Country Club. In 2020, she won the Buffalo District Golf Association Individual Women’s Championship at the Springville Country Club.

Mary Jo Kelly, 65, of Wolferts Roost Country Club, won the NYS Women’s Amateur in 1980 at Foxfire GC and was runner up at Kingswood Golf Course in 1999, having had major success on the local level. She’s been women’s club champion over thirty times at Wolferts Roost, and has won six Northeastern Women’s Golf Association (NEWGA) championships. In 2015, Kelly earned a berth into the U.S. Senior Amateur at the Hillwood CC in Nashville, Tenn. She returned to the NYSGA circuit last year, finishing tied for ninth in the Mid-Am at her home club and as runner-up in the Women’s Senior at Corning Country Club.

Sue Kahler, 62, of Ballston Spa Country Club, won the 2013 NYS Women’s Senior Amateur. She also has two NYS Senior Mixed Team titles (2013, 2014) under her belt, where she won with her brother, Gary. Kalher has won 21 club championships at Ballston Spa, and is currently an assistant women’s golf coach at Union College.

Other Women to Watch

Francioso, 20, of Bethpage State Park, wrapped up her junior season as part of the Elon University women’s golf team. She earned a top-30 individual finish in the CAA Championship. She competed in the Metropolitan Junior PGA Tour, earning 14 first-place finishes and 51 top-three finishes, out of 107 events played.

Carly Haines, 19, of Wykagyl Country Club, placed second in the Girl’s Future Series in 2020, part of the PGA Metropolitan Section Junior Tour. She is a three-time Metropolitan PGA Junior Tour champion. Currently, she is a member of the Louisville women’s golf team, where she just concluded her freshman season. She finished third in the 2019 Kentucky Women’s Open.

Emily Kase, 20, part of the NYSGA eClub - Western New York, is coming off a season at Stonehill College where she was named All-NE10 Conference Second Team and NE-10 All-Championships team (one of only two women to do so in program history). In high school, she was a two-time Western New York Junior PGA Player of the Year.

Jessie Kweon, 20, of Douglaston Golf Course, is a member of the St. Johns University women’s golf team. She was named BIG East Freshman of the Year after recording four top-15 finishes and two top-tens. Before college, she was active on the PGA Metropolitan Section Junior Tour circuit, placing ninth at the 2018 Metropolitan Junior PGA Championship, third in 2017 and was the runner-up in 2016.

Elena Lopez, 21, of Crag Burn Golf Club, finished second at the 2018 NYS Girls’ Junior Championship. She recently wrapped up her junior season on the Quinnipiac Women’s Golf Team, and was part of the program’s third ever conference title in 2021. She finished sixth in the 2019 NYS Women’s Amateur.

Amber Pennington, 18, of Wiltwyck Golf Club, recently completed her freshman season on the Delaware State University women’s golf team. While at Rondout Valley High School, she was a three-time NYS Section IX Champion, and placed ninth in the NYSPHSAA State Championship during her sophomore year.

Alexandra Tomasso, 20, of the NYSGA eClub - Southern Tier, wrapped up her sophomore season on the Merrimack College women’s golf team, where she claimed 23rd at the NEC Championship to end the year. She earned a pair of top-30 individual finishes in her freshman season. While at Waverly High School, she was named first team all-state, while capturing two individual conference titles.

Madison Walker, 21, of the NYSGA eClub - Capital District, just wrapped up her junior season on the University of Albany women’s golf team. She was named MAAC co-rookie of the year before finishing T-16 in the 2021 MAAC Championship this past year.

Claire Yioulos, 19, of Oak Hill Country Club, is a rising sophomore on the Richmond University women’s golf team. In high school, she was named Section V Player of the Year and won the Section V Tournament of Champions.

Julia Zigrossi, 15, of Ridgemont Country Club, competed in her first American Junior Golf Association event in 2020, finishing in the top three. Since then, she’s won the Onondaga Golf and Country Club Junior Invitational and the New York State High School Invitational. In 2020, she also secured top finishes in the RDGA Women’s Championship and Girl’s Junior Championship. She just wrapped up her sophomore year at Spencerport High School, and won the 2020 Section V Championship.

Teugega Country Club, located in Rome, was founded in February 1899 by Franklin Ethridge. Known as “the father of golf”, Ethridge brought together 125 townsmen to create the first golf course in the city.

Eugene Rowland nominated the name "Te-uge-ga," referenced in the 1851 Annals of Oneida County as the local Native American's designation for the Mohawk River.

In 1900, land along the Mohawk River, today known as Mohawk Acres, was officially leased and Teugega Country Club opened for play on their new 9-hole course on Decoration Day.

By 1912, members of Teugega declared that the original nine holes were no longer challenging. The Greens Committee was established and instructed to develop additional hazards to make the course harder.

The original course was built on very poor ground for golfing. If Teugega was to grow, a new course would have to be built elsewhere. Donald Ross was hired by Teugega to design a new 18-hole course six miles north at Lake Delta.

Ross worked from topographic maps, drawing up blueprints for his course routings, famous for requiring little walking from one green to the next tee.

On Independence Day weekend 1921, Teugega opened its new 18-hole course. The finished course reflects many of the hallmarks of a Ross-designed course. The basic routing of the holes unfolds in a fan-shape, with the clubhouse at the handle. A century later, Teugega is celebrating its centennial year as one of the best remaining legacies of Ross.

The 1st tee, 9th green, 10th tee and 18th green all lie within easy pitching distance from the clubhouse. The holes themselves zigzag across the terrain without consecutive fairways racing down the same direction.