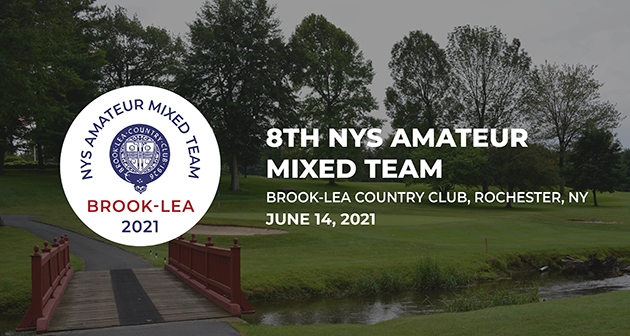 The field is set at 63 sides (126 players) divided into two divisions: Amateur and Senior Amateur (men 55+, women 50+). The Championships will run concurrently on Monday over 18 holes of modified chapman stroke play. There will be gross and net winners each division. The entire field will tee off with a shotgun start set for 1:00 pm.

Format: 18 holes of modified chapman stroke play (gross and net). Two players play as partners, each partner plays from the teeing ground and plays the partner's ball for the second shot. After the second shot, partners select the ball with which they wish to score and play that ball alternately to complete the hole. This format is modified on par-3s, so that the decision as to which ball to play alternately must be made after the tee shot.

Tees to be Played:

Other New York State champions in the field

The Brook-Lea Country Club was constructed in 1926, led by renowned golf course architect Donald Ross. He hand drew the layout, originally envisioned as 27 holes. While some of the holes have been renumbered from their original labels on the blueprints below, his hallmarks are found throughout the course.

The members and staff are committed to providing a comfortable and relaxed atmosphere. This golf course remains one of Rochester’s most challenging and enjoyable golf courses, sitting on 188 spectacularly scenic acres that include upland meadows, a meandering creek, ponds, and mature woodlands.