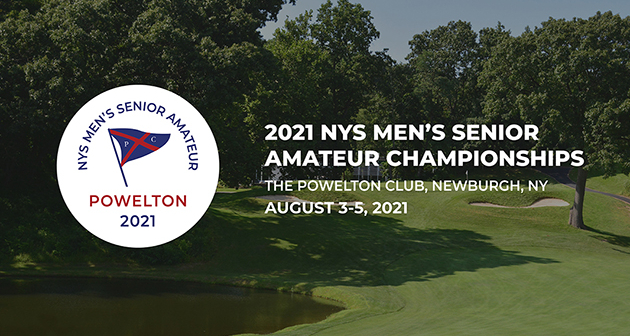 The 54-hole stroke play championship begins on Tuesday, with a cut on Wednesday to the low 50 percent of players and ties after Wednesday’s round. The remaining competitors will play 18 more holes on Thursday to decide a champion. If a tie exists after 54 holes, a sudden-death playoff will determine the winner.

Format: 54 holes of stroke play, played over three days of competition. There is a cut after 36 holes to the low 50% of both fields and ties.

Eligibility: This championship is open to male amateur golfers who meet the following requirements: Be a member of the NYSGA, defined as either (1) belonging to an NYSGA member club or (2) joining the NYSGA as a 2021 NYSGA eClub member. Players must also have a USGA Handicap Index issued by an NYSGA member club of 12.0 or less and at least 55 years old as of August 2021.

Past NYS Men’s Senior Champions in the field

Bob Hughes, 60, of Watertown Golf Club, won the 2018 championship at Mohawk Golf Club in a two-hole playoff over Wade Sarkis of Canandaigua Country Club. He is an eight-time winner of the Watertown Men’s City Golf championship.

Tom Fletcher, 63, of Tuscarora Golf Club, won the 2015 championship with a birdie on the second playoff hole at Onondaga Golf & Country Club against Don Enga of Cherry Valley Club. He won the 2020 AIM Senior Championship. Fletcher was inducted into the Greater Syracuse Sports Hall of Fame in 2017 and is also a member of the LeMoyne College Sports Hall of Fame.

Daniel Russo, 63, of Schuyler Meadows Club, won the 2019 NYS Senior Amateur title He competed in his first state senior in 2018, finishing T9. He’s qualified for the U.S. Senior Open twice (2017, 2009), and the 2015 U.S. Senior Amateur. He won the 2020 Society of Seniors Dale Morey championship and finished T7 in the Golfweek Senior Challenge Cup.

Dave Prowler, 63, of Towers Country Club, won the 2017 championship at Crag Burn Golf Club. He competed in the Long Island Open Championship in 2019 and 2020. Prowler also made the field for the 2012 U.S. Senior Open Championship

Past NYS Super Senior Champions in the field

Jim Hamburger, 70, of McCann Golf Course, won the 2018 championship by four strokes over Anthony Tomaselli of Yahundasis Golf Club. He finished runner-up in the 2019 championship, falling by one stroke. He also won the 2016 Dutchess County Senior Amateur.

John Hamilton, 71, of Hudson National Golf Club, won the 2019 Super Senior championship in wire-to-wire fashion for his first NYS title. He was the runner-up in 2017 at Crag Burn Golf Club.

John Hathway, 74, of NYSGA eClub – Watertown, won the title at Onondaga Golf & Country Club in 2015 by a stroke.

Past NYS Champions in the field

Kevin Webb, 62, of Clifton Springs Country Club, was the 2017 NYS Men’s Senior Four-Ball co-champion at Leatherstocking Golf Course with a two-round total of 136 (-8). In 2018, he teamed up with his wife Lisa to win the NYS Senior Mixed Team championship at Skaneateles Country Club. The duo won again this year, capturing their second Mixed Team title at Brook-Lea Country Club.

Others to Watch in Senior

Bob Cooper, 65, of Schenectady Municipal Golf Club, held the lead throughout the first two rounds at the 2018 championship at Mohawk, shooting 70-69 before carding a final round 79 to finish in solo fifth. He finished top ten in Lousiana’s Senior Amateur in 2019.

John Bufalini, 59, of NYSGA eClub - Watertown, qualified for the 2018 U.S. Senior Amateur at Eugene Country Club in Oregon. In 2019, he won his seventh Watertown City Golf title. He finished T2 in the 2019 championship, trailing by one stroke to the champion, Russo.

David Hicks, 57, of Cornell University Golf Course, finished T2 in the 2019 championship, coming within one stroke of the eventual champion, Daniel Russo. He serves as the golf course superintendent at his home club.

Kevin Vandenberg, 55, of Tuscarora Golf Club, has won a slew of Syracuse District events over the past few years. He qualified for the U.S. Senior Open twice (2019, 2016). In 2016, he won the CNY PGA’s Central New York Open and qualified for the US Four-Ball with partner and NYSGA Executive Director Bill Moore. Prior to moving to New York, he was a resident of Michigan where he claimed a Golf Association of Michigan Championship title, a Michigan Amateur title as well as Mid-Amateur title in the early 2000’s.

Ken Cohen, 58, of Villa Roma Country Club, finished T8 at the 2019 championship. He won his first amateur tournament in 2001 at the Sullivan County Men’s Amateur Championship.

Others to Watch in Super Senior

Anthony Tomaselli, 68, of Yahnundasis Golf Club, was the 2018 runner-up in the Super Senior Division.

The Powelton Club developed slowly beginning with the site of the Powelton House, a resort hotel that had burned in 1870. It gradually took land from the surrounding Powelton Farms as the golf course was expanded. The growing club had two tennis courts, a windmill to water the courts and a summerhouse to provide shelter for its guests.

In April of 1892, The Powelton Club received its charter and seal of incorporation. Maude Ramsdell designed a five – hole golf course on the property. In November of 1895, the first handicap tournament was held, only to end in a tie. As the popularity of golf grew, a nine – hole course was created the following year. In 1899, The Powelton Club joined the Metropolitan Golf Association as one of its earliest members.

By 1902, eight golf clubs in the area met to form the Hudson River Golf Association. The club had become an active member of the United States Golf Association in 1915. The golf committee secured the services of George Merritt, "a prominent Golf Professional" This was the beginning of having an established golf professional on the property throughout the season.

In 1921, Devereaux Emmet was hired to design a new golf course. The new eighteen – hole course was officially opened in May of 1926. In 2017, the Powelton Club celebrated its 135th Anniversary.