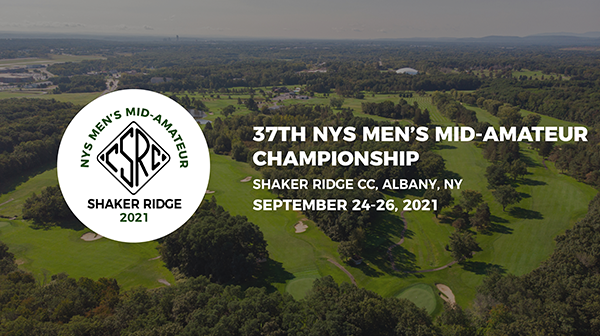 ALBANY, N.Y. – The upcoming 37th annual New York State Men’s Mid-Amateur Championship at Shaker Ridge Country Club will challenge the best male amateurs, ages 25 and up, from around the state throughout 54 holes of stroke play over three days from September 24 – 26, 2021.

The championship begins on Friday with 18 holes of stroke play, with a cut applied to low 60 players and ties afterwards. After a second round of 18 holes on Saturday, the field is cut again to the low 30 and ties. The remaining competitors will play the final 18 holes on Sunday to decide the next state Mid-Amateur champion. If a tie exists after 54 holes, a sudden-death playoff will determine the winner.

Bradford Tilley of Sleepy Hollow Country Club won in wire-to-wire fashion in 2019, securing his first state title by seven strokes. His nine-under 204 performance set the record for lowest under-par score in the history of the NYS Men’s Mid-Amateur.

Eligibility: Entries are open to male amateur golfers, ages 25 and older, who are either (1) residents of New York State or (2) members of an NYSGA Member Club, and have an active Handicap Index of 10.4 or lower.

Patrick Pierson, 57, of New York Country Club, won the 2003 championship at Teugega Country Club. He finished T13 in the 2021 NYS Men’s Senior Amateur at The Powelton Club. In 2015, he won the Westchester Golf Association’s Senior Tournament of Champions. He also won the 2017 WGA Mid-Amateur in a playoff.

Ken Riter, 58, a NYSGA eClub member out of Western NY, claimed the title in 2009 at Glens Falls Country Club.

Jimmy Welch, 54, of Olde Kinderhook, won the 2011 championship at Dutchess Golf and Country Club. He participated in the 2019 U.S. Mid-Amateur, his first USGA championship.

Nicholas Braman, 36, of Shaker Ridge Country Club, is a two-time NYS Mixed Team Amateur champion, capturing titles in both 2018 and 2019. In both of his victories, his cousin, Madison, was his partner.

Don DeNyse, 32, of Capital Hills at Albany, won the 2006 NYS Boy’s Junior at Drumlins (East). He played collegiately at Siena College, where he was named MAAC Rookie of the Year. He won the 2011 Troy Invitational and the 2014 Donald Ross Classic at the Sagamore.

Todd Dischinger, 65, of Foxfire Golf Course, won the NYS Men’s Amateur in 1992 at Drumlins Country Club’s East Course. He was qualifying medalist at the Syracuse qualifier.

Billy Hanes, 35, of Crag Burn Golf Club, won the 2018 NYS Men’s Amateur Four-Ball at Leatherstocking with his younger brother David, finishing at 11-under 133 to win by two. He also won the 2015 title with partner Jamie Miller. Additionally, Hanes claimed the NYS Boys’ Sub-Junior title in 2000 at Wellsville Country Club. He finished runner up at the 2018 NYS Men’s Mid-Am and in the top 10 at both the 2019 NYS Men’s Amateur & Mid-Amateur Championships.

Doug Kleeschulte, 31, of Wiltwyck Golf Club, was crowned the Men’s Amateur champion in 2010 at Albany Country Club with a one stroke victory over the field. He has appeared in a string of USGA championships over the years and most recently competed in the 2015 U.S. Four-Ball and U.S. Amateur.

Daniel Russo, 63, of Schuyler Meadows Club, won the last two NYS Senior Amateur titles, in 2021 and 2019. He competed in his first state senior in 2018, finishing T9. He’s qualified for the U.S. Senior Open twice (2017, 2009), and the 2015 U.S. Senior Amateur. He won the 2020 Society of Seniors Dale Morey championship and finished T7 in the Golfweek Senior Challenge Cup. At the 2019 NYS Men’s Mid-Amateur, he finished in fifth. He most recently competed in the U.S. Senior Am at Country Club of Detroit, advancing as far as the Round of 16.

Michael Stopera, 32, of Edison Club, won the 2021 NYS Men’s Four-Ball championship with partner Michael Dwyer.  The pair came back from a four-stroke deficit on the final day of the tournament at Leatherstocking Golf Course, by shooting 10-under 62 to win by a stroke.

Jeff Wolniewicz, 35, of Crag Burn Golf Club, won the 2008 Men’s Amateur title at Pinehaven Country Club, 5&4 when it was still a match play format. He won the 2017 N.Y.S. Men’s Amateur Four-Ball Championship at Leatherstocking Golf Club with partner Jonathan Clark and earned the same title the year prior with a different teammate, now-professional Billy Gaffney. The Buffalo native was inducted into the Binghamton University Athletics Hall of Fame in 2018. He played on the men’s golf team from 2003-2007.

Colby Anderson, 36, of Nassau Country Club, recently finished top five in the Long Island Amateur Championship, as part of three consecutive years of top-ten finishes. He won that championship and the Long Island Mid-Amateur in 2018.

Chris Blyth, 28, of Mendon Golf Club, finished runner-up at both the 2018 and 2019 NYS Men’s Amateur Championships. He won the 2018 Rochester District Golf Association (RDGA) Championship, and finished runner-up in the 2021 RDGA Mid-Am. Blyth graduated from St. John Fischer College, where he became one of the most decorated golfers in team history. During his collegiate career, Blyth was a three-time All American and guided the Cardinals to four NCAA Division III Men's Golf Championship appearances including three top-10 finishes.

Kyle Downey, 31, of Locust Hill Country Club, made the Round of 64 in the 2018 U.S. Mid-Amateur. He finished T7 at the 2021 Men’s Amateur championship, and established the tournament lead throughout the first two rounds. He also finished T7 during the 2019 NYS Mid-Amateur. He was the low amateur at this year’s Western New York Open at Stafford Country Club, and a runner-up in the last two RDGA District Championships.

Jim Gifford, 34, of Mohawk Golf Club, finished fourth at the 2019 NYS Men’s Mid-Amateur at Tuscarora Golf Club and T7 at this year’s Men’s Amateur at Schuyler Meadows Club. In 2019, he won the Saratoga County Amateur. He qualified for the U.S. Mid-Amateur in 2018. He was co-captain for Siena College in 2008-09.

Darin Goldstein, 40, of Deepdale Golf Club, finished runner-up at the 2021 Long Island Amateur and was the low amateur during the 2021 Long Island Open after forcing a playoff with eventual winner Andrew Svoboda. He also won the 2017 Met Mid-Amateur championship, and was voted the Metropolitan Golf Association’s Player of the Year in 2018. He was the runner-up during the NYS Men’s Mid-Am in 2017 at Yahnundasis. He’s qualified for several U.S. Amateur and Mid-Amateur championships in recent years.

James Jackson, 27, of Shaker Ridge Country Club, qualified for the 2021 U.S. Amateur at Oakmont Country Club. He was the head coach of his Rensselaer Polytechnic Institute’s men’s golf team, his alma mater where he was one of the most accomplished golfers in school history.

Shaker Ridge Country Club was established in 1929, originally designed by Jim Thompson and later remodeled by Stephen Kay and Doug Smith in 1998. Always known as one of the toughest courses in the area, the par-71 layout recently installed bent grass greens. Located next to the Albany airport, this course is placed in the heart of the Capital District and stretches to as long as 6,837 yards, featuring two par-fives and three par-three holes.

Past NYS Championships at Shaker Ridge