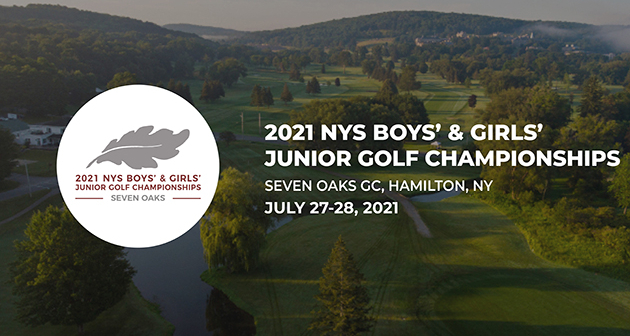 Format: 36 holes of stroke play, played over two days. There will be no cut in these championships.

Eligibility: Open to male and female amateur junior golfers (18 & under) who are residents of New York State or, if not a resident, are dues paying members of an NYSGA member club. Entrants must have an active USGA Handicap Index (provided free by the NYSGA to all juniors).

Fischer, 16, recently had a successful defense of the Buffalo District Golf Association (BDGA) Boys’ Junior Stroke Play title, marking his second consecutive victory. He placed in the top ten at the 2021 International Junior Masters. He won the 2019 NYS Boys’ Sub-Junior, winning by five strokes to capture his first state championship after finishing runner-up in 2018.

The 58th NYS Girls’ Junior contains no past champions this year. Bailey Shoemaker, winner of the last three Girls’ Junior titles, is not in the field.

The 64th NYS Boys’ Sub-Junior field contains no past champions this year. Fischer, the champion in 2019, is competing in the Boys’ Junior Amateur field.

Shawn Colella, 16, of Bellevue Country Club, won the International Junior Masters earlier this summer. He was the runner-up at the 2016 & 2017 NYS Boys’ Sub-Junior Championships. Colella, who regularly competes in Syracuse District events, was named SDGA Boys Player of the Year in 2016. He also won the three consecutive Syracuse District Junior Championships in 2016, 2017 and 2018.

Johnny Gruninger, 18, of Bellevue Country Club, is a top junior in Central New York, and recently won the Syracuse District Golf Association (SDGA) Junior Match Play, was low amateur in the CNY Open, and won the Onondaga G&CC Junior Invite. In 2020, he swept the SDGA majors including the Gerry Ashe Memorial, District Match Play, Junior Match Play which earned him both Player of the Year and Junior Player of the Year honors. He also won both the 2017 & 2018 Syracuse District Junior Classics.

John Hiller, 15, of Westchester Country Club, was in the field for the 73rd U.S. Junior Amateur. He finished third in the New Jersey sectional qualifier to secure a spot. Less than a month ago, the NYC native won the Mahoning Valley Hospital Foundation Junior All-Star championship. Last August, he finished second in the AJGA Junior All-Star at Toftrees. The PGA Metropolitan Section Tour member competed in the National Drive, Chip and Putt championships at Augusta National in 2015 as well.

Jack Berl, 17, of the NYSGA eClub - Rochester, recently competed in the 73rd U.S. Junior Amateur. A rising senior at Victor Senior High School, Berl recently placed second in the Coca-Cola Junior Championship in August 2020. Before that, he secured five consecutive top-15 finishes on the Hurricane Junior Golf Tour, including a victory at the Turning Stone Junior Open and placing top 10 in four of those events.

Anthony Delisanti, 18, of Willowbrook Golf Course, won the Buffalo District Golf Association’s (BDGA) 2021 Men’s Individual Championship (his second consecutive title). In 2020, he dominated BDGA events, sweeping the Individual, Match Play, Junior Match Play and was named Men’s Player of the Year. In 2018 and 2019, he was honored as BDGA Junior Player of the Year. He placed sixth at this year’s Monroe Invitational, and fifth at the International Junior Masters. Delisanti will be a member of the Valparaiso men’s golf team in the fall.

Phillip Minnehan, 18 of Locust Hill Country Club, is committed to play golf at Towson University in the fall. He won the 2021 AJGA Killington Junior Golf Championship and the Rochester District Junior Championship in 2019.

Seth Conway, 18, of Corning Country Club, was one of seven New Yorkers to make the U.S. Junior Amateur. He recently earned a T35 finish at the AJGA Junior Championship. He also finished T3 at the Billy Horschel Junior Championship, shooting six-under 210 in his 54 holes of play. The George Mason University commit was a top-ten finisher in the 2019 NYS Boys’ Junior and finished in third place at the 2017 NYS Boys’ Sub-Junior.

Renna Chang, 13, of Harbor Links Golf Course, is a member of the PGA Metropolitan Section Junior Tour. She won the Future Series at Bethpage Red in June and finished runner-up at the New York City Championship in July. At the Met PGA Junior Championship, Chang finished fifth.

Sophia Li, 14, of the MGA eClub - New York City, won the 10-12 age division at the 2019 Drive, Chip and Putt Finals at Augusta National, becoming the first girl in the event’s history to sink putts from 30 and 15 feet.

Amelie Phung, 13, of FSGA Central-South, finished fifth in the 12-13 division of the 2021 Drive, Chip and Putt Finals. She won the 2021 New York City Championship, and finished runner-up at the International Junior Masters.

Julia Zigrossi, 15, of Ridgemont Country Club, recently captured the 2021 NYS Women’s Amateur Four-Ball with partner Emily Gresham, along with a top-5 finish in the NYS Women’s Amateur. She successfully defended her title at the 2021 Rochester District Golf Association’s (RDGA) Girls’ Junior, earning her second victory. She won the 2021 Onondaga Golf and Country Club Junior Invitational and the New York State High School Invitational. Last season, she also secured an RDGA win in their Women’s Championship. She just wrapped up her sophomore year at Spencerport High School, and won the 2020 Section V Championship.

Halim Habib, 13, of the Country Club of Buffalo, won seven events on the Western New York Junior PGA Tour in 2020, including the Bobby Steele Memorial. He placed third in the WNYPGA Junior Championship that year. He was fourth in his division at the 2020 Rochester Junior Open.

Kieran Cummins, 14, of Wolferts Roost Country Club, has won 15 Northeastern New York Junior PGA events since 2018. He finished runner up in the 2019 NENY PGA Junior Tour Championship, and won the event in 2020. He also competed in the 2020 Notah Begay III National Championship.

Jason Starkweather, 13, of Ridgemont Country Club, has won two events this year on the Western New York Junior PGA Tour, and finished runner-up in three. He was a second place finisher in the 2020 WNYPGA Junior Tour Championship, and won four events that year on the Tour.

In 1916, a group of faculty from Colgate University and other townspeople created the Hamilton Golf Club, a nine-hole course, located behind student dormitories near Colgate’s campus. In 1927, the course was redesigned by Thomas Winton and named Seven Oaks. Less than ten years later, William Reid proposed an 18-hole course to be constructed on the newly-acquired Dunn Farm. Gene Sarazen and Robert Trent Jones helped Reid create the “Augusta of the North.”