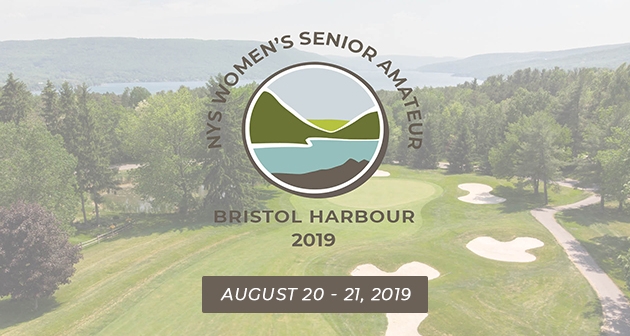 CANANDAIGUA, N.Y. – The upcoming 2019 New York State Women’s Senior & Super Senior Championships are set to challenge many of the best senior women amateur golfers around the state throughout 36 holes of stroke play over two days from August 20-21, 2019 at Bristol Harbour Golf Club in Canandaigua, NY.

Format: 36 holes of stroke play, played over two days of competition in a shotgun format.

Past Women’s Senior Champions in the Field

Tammy Blyth, of Monroe Golf Club, made par on the second hole of a playoff to win the 2018 NYS Women’s Senior Amateur Championship at Thendara Golf Club over Kim Kaul and Sue Kahler. The three past champions finished the 36-hole tournament tied at 156.

Mary Sicard, of Queensbury Country Club, won back-to-back championships in 2016 & 2017, in her first two years competing in the field.

Sue Sims, of Skaneateles Country Club, a three-time champ, won her trio of titles in the 90’s at Dutchess Golf and Country Club in ’93, again the following year at Cavalry Club and her final in ’96 at Lockport Town Country Club.

Past Women’s Super-Senior Champions in field

Ronnie Levine-Ribble, of Penfield Country Club, posted the field low of 78 in the final round to win the 2018 NYS Super-Senior Championship by a stroke at Thendara Golf Club.

Cecily Havens, of Pompey Club, will attempt to capture her third NYS Women’s Super-Senior title in five years after winning in 2016 at the Whiteface Club & Resort and Thendara Golf Club in 2015. She was runner-up in 2018 at Thendara Golf Club.

Michelle Marquis, of Pompey Club, won the Senior title when the championship was held at the Country Club of Rochester in 2000. Fourteen years later, she took home the Super-Senior title in 2014 at Kanon Valley Country Club.

Other NYSGA Champions in Field

Pennie Carlo, of Crestwood Golf Club, captured her first NYS title earlier this summer at the Women’s Four-Ball Championship at Ravenwood Golf Club with partner Lauren Cupp. She qualified for the 2019 U.S. Senior Women’s Amateur and qualified out of Tuscarora Golf Club.

Others to Watch in Senior Division

Carolyn Mancini, of Binghamton Country Club, was co-runner-up at last year’s championship. She finished in a three-way tie after 36 holes at 156 with Tammy Blyth and Kim Kaul.

Sandra Jackson, of Whippoorwill Club, finished in fifth in last year’s championship at Thendara. She qualified for the 2014 U.S. Senior Women’s Amateur at Hollywood Golf Club in New Jersey.

Others to Watch in Super Senior Division

Situated along the shores of Canandaigua Lake, Bristol Harbour is in the heart of the Finger Lakes wine country. Robert Trent Jones designed the golf course in 1972. The course is set up at 6,62 yards and is played to a par of 72. The layout offers two unique nines, with the front side composed of links-style holes and showcases the resort’s lakefront views. The back nine consists of tighter holes that are laid out through the property’s forest.

Bristol Harbour has homed multiple New York State events, including the 1981 and 1990 Women's Senior, the 1991 Boys’ Junior and Sub-Junior Championship, as well as the 1992 Men’s Mid-Amateur Championship.