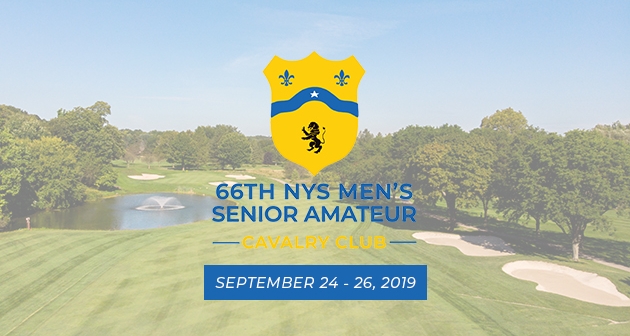 The championship begins on Tuesday with 18 holes of stroke play and the 132-player field will be divided into morning and afternoon waves. Wednesday, the field will play a second set of 18 holes to decide who survives the cut – set at low 50% of players and ties in each division (Senior and Super Senior). On Championship Thursday, the remaining competitors will play a final 18 holes to decide the next state champion in both divisions. If a tie exists after 54 holes, a sudden-death playoff will determine the winner.

Format:54 holes of stroke play, played over three days of competition. There is a cut after 36 holes to the low 50% of both fields and ties.

Eligibility:This championship is open to male amateur golfers who meet the following requirements: Be a member of the NYSGA, defined as either (1) belonging to an NYSGA member club or (2) joining the NYSGA as a 2019 NYSGA eClub member. Players must also have a USGA Handicap Index issued by an NYSGA member club of 12.0 or less and at least 55 years old as of September 2019.

Past NYS Men’s Senior Champions in the field

Paul Pratico, 58, of Schenectady Muni Golf Course, won the 2016 championship at Brookfield Country Club by three strokes over the field.

Tom Fletcher, 62, of Tuscarora Golf Club, won the 2015 championship with a birdie on the second playoff hole at Onondaga Golf & Country Club against Don Enga of Cherry Valley Club.

Matthew Haefele, 69, of Stafford Country Club, won the championship when it was held at his home course in 2009.

Past NYS Super Senior Champions in the field

John Hathway, 72, of NYSGA eClub – Watertown, won the title at Onondaga Golf & Country Club in 2015 by a stroke.

Perry Noun, 82, of Lake Shore Yacht & Country Club, was the champion during the 2005 championship at Vestal Hills Country Club.

Past NYS Champions in the field

Kevin Webb, 60, of Mendon Golf Club, was the 2017 NYS Men’s Senior Four-Ball co-champion at Leatherstocking Golf Course with a two-round total of 136 (-8). In 2018, he teamed up with his wife Lisa to win the NYS Senior Mixed Team championship at Skaneateles Country Club.

Others to Watch in Senior

Wade Sarkis, 57, of Canandaigua Country Club, was last year’s runner-up and lost in a two-hole playoff to Bob Hughes after shooting a final-round 68.

Bob Cooper, 63, of Schenectady Municipal Golf Club, held the lead throughout the first two rounds at last year’s championship at Mohawk, shooting 70-69 before carding a final round 79 to finish in solo fifth.

Others to Watch in Super Senior

Designed by Joe Lee and Dick Wilson, the Cavalry Golf Club opened to instant acclaim on June 26, 1965. In place of the old horse barns, stood a sparkling new club house and nestled in the sweeping curve of Limestone Creek, an 18-hole golf course was carved into the rolling countryside at a place where, at one time, the troopers and their mounts had prepared to go to war.  Enlightened leadership, spearheaded by old troopers from Company C, played a key role in the club’s development, as has the active participation of the associate membership since.