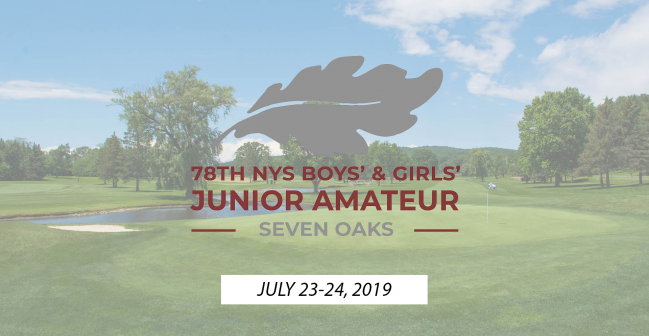 Format: 36 holes of stroke play, played over two days. There will be no cut in these championships.

Eligibility: Open to male and female amateur junior golfers (18 & under) who are residents of New York State or, if not a resident, are dues paying members of an NYSGA member club. Entrants must have an active USGA Handicap Index (provided free by the NYSGA to all juniors).

Luke Sample, 16, of NYSGA eClub - NYC, birdied the opening hole of a sudden-death playoff to claim the 2018 NYS Boys’ Junior Championship. He also captured the NYS Boys’ Sub-Junior Championship in 2017 by four strokes making him the third player in NYSGA history to win a Sub-Junior and Junior back-to-back. More recently, Sample captured medalist honors at the local qualifying round for the U.S. Open. He did not advance through sectional qualifying. The NYC native recently made a verbal commitment to Duke University.

Jude Cummings, 17, of Locust Hill Country Club, took home the 2017 NYS Boys’ Junior in a four-hole playoff. He also captured the 2016 NYS Boys’ Sub-Junior Championship, becoming the second player in NYSGA history to win a Sub-Junior and Junior back-to-back since Ron Philo set the mark in 1961-62.

The 57th NYS Girls’ Junior has one past champion in the field, Bailey Shoemaker of Seven Oaks.

Shoemaker, 14, of Seven Oaks, will be competing in her fifth NYS Girls’ Junior Amateur. At last year’s championship, the West Edmeston native captured the title by three strokes at one-over 109. In 2017, she routed the field with a seven-stroke victory, finishing at even par 144. In 2015, she finished in the top-10 at age 10. Shoemaker has competed across the national stage multiple times, including at the 2018 & 2019 PGA Girls’ Junior National Championship, 2018 Drive, Chip and Putt National Finals, the 2018 U.S. Women’s Amateur Four-Ball, as well as the 2018 U.S. Girls’ Junior. Capturing the 2017 title at the age of 12, she was more than likely the youngest winner ever to claim the Betty Deeley Cup. Shoemaker recently made a verbal commit to the University of Southern California.

The 63rd NYS Boys’ Sub-Junior field contains no past champions this year. Last year’s champ, Maglisco and 2017 champ, Sample, are both competing in the Boys’ Junior Amateur field.

Austin Fox, 18, of Normanside Country Club, recently wrapped up his first season on the University of Rhode Island men’s golf team. Fox became the first-ever golfer to win the New York State Public High School Athletic Association Section II Champion three straight years (2015-17). He qualified for the 2017 U.S. Junior Amateur where he missed the two-round cut with a 157 (+15). He also finished second at the 2017 NY State PGA Junior Championship. Fox was named Northeastern New York PGA Player of the Year in 2015 and 2016.

Ryan Hart, 17, of Country Club of Buffalo, recently competed at the U.S. Junior Amateur last week. He did not advance through the first two-rounds of stroke play after carding a 13-over 155. Last year, Hart finished T-4 at the NYS Boys’ Junior Championship. The Naples, Fla. Resident is the son of PGA Tour professional Dudley Hart.

Jimin Jung, 17, of Trump National Westchester, competed in the 2019 U.S. Amateur Four-Ball Championship with partner Jud Langille. The duo missed the two-round cut, finishing at 139. They were among the youngest in this year’s championship field, with 16-year-old Langille being the fourth youngest, and Jung the fifth. Jung was the runner-up at the 2018 New York State Association of Independent Schools tournament, losing by a shot. The Briarcliff Manor native also earned runner-up honors at the 2017 MGA Boys Championship after losing Langille in 20 holes.

Jud Langille, 17, of Trump National Westchester, competed alongside Jung at the U.S. Amateur Four-Ball earlier this year. Langille also played at the 2018 U.S. Junior Amateur but failed to make the stroke play cut. He was the 2017 MGA Boys Champion, defeating last year’s NYS Boys’ Junior Champion Sample in the semifinals, 1 up, and Jung in 20 holes during the championship match. Langille was also the 2017 Westchester Golf Association Boys Champion at Knollwood Country Club.

Jason Lohwater, 18, of Brook-Lea Country Club, won the 2016 Rochester District Golf Association Junior Championship and was named the 2016 WNYPGA Player of the Year. He won four WNYPGA events in 2016, including the Tour Championship. He finished T-7 at last year’s NYS Junior Championship. The Rochester native recently wrapped up his first season on the Bucknell Men’s Golf team.

Zachary Ong, 14, of The Golf Club of Purchase, carded a nine-under 133 at his sectional quailfer to advance to the 2019 U.S. Amateur. At just 14, Ong is the youngest Singaporen golfer to qualify for the championship. Ong won the 2018 Atlantic Coast Conference Junior Amateur with a score of seven-under 137. He also finished second at 2017 Optimist International Junior Golf Championships.

Alex Zurat, 18, of Oak Hill Country Club, recently competed at the 2019 U.S. Junior Amateur. He missed the two-round cut after carding a 11-over 153. In his junior career, Zurat has won both the U.S. Challenge Cup Granite State Junior Classic and the New York State Junior PGA Championship. Zurat will begin his college career this fall at Old Dominion University.

Taylor Miano, 17, of Metropolis Country Club, finished second at the 2019 Girls Met Junior PGA Championship and the Future Series: Bethpage Spring Challenge. She was runner-up in the 2016 & 2017 NYS Girls’ Junior Amateur. She also finished top-ten in the field at the 2018 NYS Women’s Amateur.

Lily Zhang, 10, of Park Country Club, finished fifth in her age group at the 2018 Drive, Chip and Putt National Finals. The Williamsville native is coached by LPGA Professional Cindy Miller.

In 1916, a group of faculty from Colgate University and other townspeople created the Hamilton Golf Club, a nine-hole course, located behind student dormitories near Colgate’s campus. In 1927, the course was redesigned by Thomas Winton and named Seven Oaks. Less than ten years later, William Reid proposed an 18-hole course to be constructed on the newly-acquired Dunn Farm. Gene Sarazen and Robert Trent Jones helped Reid create the “Augusta of the North.”