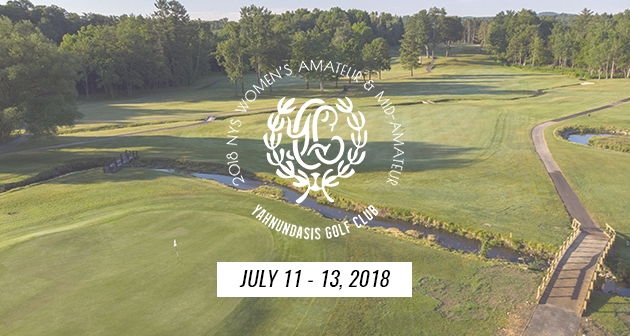 The field is set at 49 players, all of whom will surely be tested by the tricky Walter Travis design and championship setup. The Amateur & Mid-Amateur Championships will run concurrently from Wednesday through Friday’s finish with tee times off both sides (#1 and #10), for the first two rounds of the championship in groups of three competitors. After 36 holes, a cut will be applied to the low 50% of the field in each division and anyone within 10 strokes of the lead. The remaining field will be paired together based on division as well as score, and will tee off in twosomes from #1 in twosomes to finish the championship.

Format: 54 holes of stroke play, played over three days. Field will be cut to low 50% for each championship after 36 holes.

Eligibility: Open to female amateur golfers who are members of the NYSGA and have an active Handicap Index issued by a golf club which is licensed to use the USGA Handicap System. To be eligible for the Mid-Amateur, golfers must have reached their 25th birthday by July 11, 2018.

Marianna Monaco of Scarsdale Golf Club, the defending champion who claimed the 88th title last year at Schuyler Meadows Club in Loudonville, NY by a four-stroke margin. The 23-year-old from Yonkers, finished as runner-up in 2016 after losing on the first playoff hole against eventual champion Bailey Cocca. Monaco began her collegiate golf career at Newberry University where she was chosen as All-Conference Freshman Player of the Year in 2014 and All-Conference Player of the Year during her sophomore season. She transferred to the University of South Carolina as a junior, where she completed her education and was a member of the women’s golf team for two seasons.

Kyra Cox of Centennial Golf Club, captured the title in 2015 at Tuscarora Golf Club by two strokes. The 18-year-old has gained national attention in the last couple of years after qualifying for the Drive, Chip & Putt National Finals in 2015 and in 2016 competing in the US Girls’ Junior, US Women’s Amateur and Girls Junior PGA Championship. In 2017 she qualified for the Junior PGA Championship and the AJGA Girls Championship. More recently she competed in the Dixie Amateur, ANNIKA Invitational and ANA Junior Inspiration. Currently, Cox is ranked 1130 in the World Amateur Golf Rankings and will be attending Furman University in Greenville, S.C. in the fall of 2018.

Christy (Rittenhouse) Schultz of Brook-Lea Country Club has won the championship three times, first in 2004 at RTJGC at Cornell, again in 2007 at Oneida Community Golf Club, and 2008 at Wayne Hills Country Club. In 2009-10, she won the first two Mid-Amateur championships at Drumlins Country Club (East) and Sodus Bay Heights Golf Club. She also won back-to-back Girls’ Junior titles in 1996 at Mohawk Golf Club and Gowanda Country Club in 1997. The 38-year-old is making her first appearance at an NYSGA event since she last defended her Mid-Am title in 2011 (won by Teresa Cleland).

The 10th NYS Women’s Mid-Amateur Championship field contains a wide array of past New York State champions including past winners of the Women’s Amateur, Mid-Amateur and Women’s Senior:

Lauren Cupp, of Rome, will defend her title after claiming her first NYS title at Schuyler Meadows Club by one stroke. Cupp, 33, is the head men’s and women’s golf coach at her alma mater, Hamilton College in upstate New York. Cupp competed in the 2016 U.S. Women’s Mid-Amateur Championship at The Kahkwa Club in Erie, Pa. In 2015, Cupp finished runner-up in the Speedgolf World Championships at The Glen Club in Illinois, shooting a 21-over 93 in only 58 minutes! Cupp was also runner-up during the 2015 NYS Mid-Am, where she fell to Dani Mullen at Tuscarora Golf Club.

Jenna Hoecker, of Brook-Lea Country Club, will be competing in the Mid-Amateur championship this year for the first time. The 25-year-old won the Women’s Amateur in 2013 at the Country Club of Ithaca.

Mary Jo Kelly, 62, won the NYS Women’s Amateur in 1980 at Foxfire GC and was runner up at Kingswood Golf Course in 1999, having had major success on the local level. A member of Wolferts Roost in Loudonville, she’s been women’s club champion over thirty times and has won six Northeastern Women’s Golf Association (NEWGA) championships. In 2015, Kelly earned a berth into the U.S. Senior Amateur at the Hillwood CC in Nashville, Tenn. She returned to the NYSGA circuit last year, finishing tied for ninth in the Mid-Am at her home club and as runner-up in the Women’s Senior at Corning Country Club.

Kim Kaul, 60, is a two-time NYS Women’s Senior champion (2008 & 2015 at Holiday Valley & Thendara) and has finished as runner-up in both the Women’s Amateur and Mid-Amateur. The Greater Buffalo Sports Hall-Of-Famer has qualified for the US Senior Women’s Amateur, USGA Women’s State championships and the US Women’s Four-Ball.

Nancy Kroll, 55, was crowned NYS Women’s Mid-Amateur champion in 2014 at Kanon Valley after a fifteen-year hiatus from golf. The following year, Kroll won another NEWGA title at Normanside CC, her fifth time winning the championship.

Other Women to Watch

In the Women’s Amateur

Caroline Hodge, of Bonnie Briar Country Club will be competing in her first NYS Women’s Amateur. She competed in the 2017 U.S. Junior Girls Championship and finished third in the two rounds of stroke play at 2-under 140 (68-72) before losing in the first round of match play. She qualified for the 2017 Girls Junior PGA Championship where she made the two-round cut and finished in 48th at 296 and the AJGA Girls Championship where she finished 66th. The 17-year-old from Larchmont, will be headed to Florida State University to compete on the Women’s Golf team in the fall.

Alice Hodge, 15, of Bonnie Briar Country Club, will also be competing in her first NYSGA championship alongside her older sister, Caroline. Alice, competed in the 2017 U.S. Junior Girls Championship where she missed the stroke play cut by two strokes. More recently, she finished tied for third at the 2018 NYSPHSAA Girls Golf Championships at Bethpage State Park’s Yellow Course.

Madison Braman, 19, of Shaker Ridge Country Club, qualified for the 2017 Girls Junior PGA Championship at The Country Club of St. Albans, Lewis and Clark Course. She received the 2015 sponsor’s exemption for the local (Albany) Symetra Tour stop, the Fucillo Kia Championship. Last spring, she became the first female player from Section 2 to make the state team since former LPGA star Dottie Pepper of Saratoga Springs in 1983. She is a rising sophomore at William & Mary and is a member of the women’s golf team.

Chelsea Dantonio, 20, of Crag Burn Golf Club, finished tied for sixth in last year’s championship and was top-5 in 2015. She plays college women’s golf for the Winthrop Eagles and will be heading into her senior year this fall.

Julie Murphy, 37, of Brookfield Country Club, was last year’s runner-up and finished a stroke behind winner Lauren Cupp. Last August, she captured the 5th NYS Mixed Team Amateur Championship with her husband, Michael, on the third playoff hole at Skaneateles Country Club. Murphy, has been chasing the Mid-Amateur title for the past few years, avoiding finishing outside the top-6 in each of the last three championships.

The club dates to 1897, where sixty-five prominent area citizens made a commitment to create an institution that would enhance the enjoyment of their leisure hours. They began a strong tradition of sportsmanship and camaraderie that would be built upon by those who followed.

The club’s name, Yahnundasis, means “around the hill”, which Native Americans called the area around Utica’s nearby Genesee Street, the club’s original site.

After a harsh winter in 1897-98, membership decided to move the club to a better site in the village of New Hartford and built a new nine-hole layout and a clubhouse which served the members for more than seven years before the club was once again relocated.

In 1905, the club selected a new and final site for Yahnundasis, purchasing over 200 acres of farmland. The present clubhouse was formally opened and the course constructed in 1924.

A year earlier in 1923, the New York State Golf Association was founded at Yahnundasis on August 9th to foster closer and more intimate relations in and among the greater body of golfers in New York and to create an opportunity for an annual sanctioned (men’s) state championship.