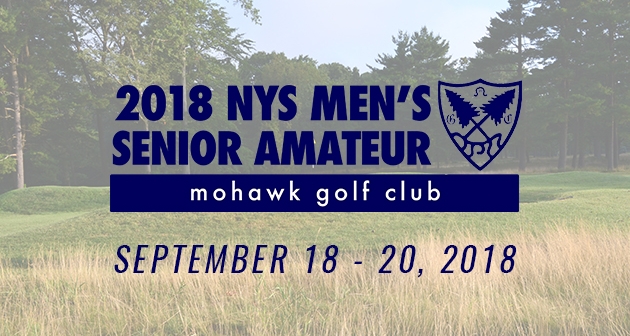 The championship begins on Tuesday with 18 holes of stroke play and the 132-player field will be divided into morning and afternoon waves. Wednesday, the field will play a second set of 18 holes to decide who survives the cut – set at low 50% of players and ties in each division (Senior and Super Senior). On Championship Thursday, the remaining competitors will play a final 18 holes to decide the next state champion in both divisions. If a tie exists after 54 holes, a sudden-death playoff will determine the winner.

Format: 54 holes of stroke play, played over three days of competition. There is a cut after 36 holes to the low 50% of both fields and ties.

Eligibility: This championship is open to male amateur golfers who meet the following requirements: Be a member of the NYSGA, defined as either (1) belonging to an NYSGA member club or (2) joining the NYSGA as a 2018 NYSGA eClub member. Playes must also have a USGA Handicap Index issued by an NYSGA member club of 12.0 or less and at least 55 years old of age as of September 2018.

Paul Pratico, 57, of Schenectady Muni Golf Course, won the 2016 championship at Brookfield Country Club by three strokes over the field.

Tom Fletcher, 61, of Tuscarora Golf Club, won the championship with a birdie on the second playoff hole in 2015 at Onondaga Golf & Country Club against Don Enga of Cherry Valley Club.

Frank Plata, 67, of Hiland Park Country Club, earned his title in 2014 at Cedar Lake Club and edged the field by a stroke. Plata will now compete for his first time in the Super Senior Division.

Frank Broderick, 66, of Crag Burn Golf Club, won the championship in 2013 when it was held at Normanside Country Club in a playoff against eventual Super Senior winner Earl Winchester, who both finished tied for 217 (+7).

Matthew Haefele, 68, of Stafford Country Club, was the champion when it was held at his home course in 2009.

Charles Connolly, 73,of Kingsbury National Golf Course, has won six New York State championships including three Senior titles (2000, 2008, 2010) and three super senior titles (2010, 2011, 2012). He last appeared in the 2013 championship when it was conducted at Normanside Country Club in Delmar, NY.

Matt Clarke, 57,of Cazenovia Country Club,won the NYS Men’s Mid-Amateur in 2005 at the Country Club of Rochester and was co-champion of the 2016 NYS Men’s Senior Four-Ball at Leatherstocking Golf Course. This will be his first appearance in the championship.

Ken Riter, 55, of NYSGA eClub – Western NY,was the NYS Men’s Mid-Am champion in 2009 at Glens Falls Country Club. This is his first appearance in the NYS Senior.

Kevin Webb, 59, of Mendon Golf Club, was the 2017 NYS Men’s Senior Four-Ball co-champion at Leatherstocking Golf Course with a two-round total of 136 (-8). Earlier this season, he teamed up with his wife Lisa to win the NYS Senior Mixed Team championship at Skaneateles Country Club.

Their championship golf course is the centerpiece of the Mohawk Golf Club. Created by the renowned designer Devereux Emmet in 1904, it is a spectacular 18-hole parkland course.

The course possesses uniquely designed raised greens that have contours permitting devilish pin placements, many of which are protected by strategically placed sand traps. The lush rolling fairways are all framed within the mature foliage of hardwood trees.

Mohawk is one of the area's most outstanding courses and is a delight to those who have the privilege to play. Their signature hole is the "Punch Bowl", number 15. The tiara of traps surrounding the green make accurate club selection essential.

This will be Mohawk Golf Club’s fourth time hosting an NYSGA championship in the club’s history including Men’s Amateurs in 1929 and 2016, and a Girls’ Junior in 1996.