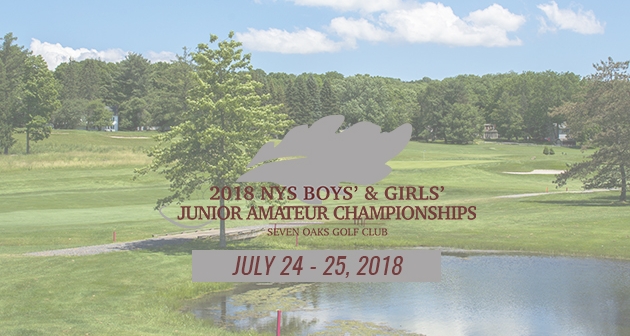 Format: 36 holes of stroke play, played over two days. There will be no cut in this championship.

Eligibility: Open to male and female amateur golfers who are residents of New York State or, if not a resident, are dues paying members of an NYSGA member club. Entrants must have an active USGA Handicap Index (provided free by the NYSGA to all juniors).

Jude Cummings, 16, will defend his title after outlasting Jeremy Sisson in a four-hole playoff last year. He also won the 2016 NYS Boys’ Sub-Junior Championship, but was unable to defend it as he was too old (15). The member of Locust Hill Country Club in Rochester, is the second player in history to win a Sub-Junior and Junior back-to-back since Ron Philo set the mark in 1961-62. He’s the ninth player to win both championships and sits alongside a lineup including Terry Diehl, Anthony Occhipinti, Dennis Gosier, Marco Poccia, Dominic Bozzelli, Yaroslav Merkulov and most recently, Gavin Hall (NOTE: Bozzelli, Hall and Cummings are all from Pittsford, New York).

Luke Sample, 15, of NYSGA eClub - NYC, is unable to defend last year’s Sub-Junior title as he is now too old to compete in the younger boys’ division (a common occurrence with this championship). Last year in his first NYSGA appearance, he impressed the field with a wire-to-wire victory with a two-round 1-under 143 and four-stroke victory.

The 62nd NYS Boys’ Sub-Junior field contains no past champions this year. Last year’s champ, Sample and 2016 champ, Cummings, are both competing in the Boys’ Junior Amateur field.

The 56th NYS Girls’ Junior has one past champion in the field, Bailey Shoemaker of Seven Oaks.

Bailey Shoemaker, 13, will be competing in her fourth NYS Girls’ Junior Amateur. Last year, she routed the field with a seven-stroke victory, finishing at even par 144. In 2015, she finished in the top-10 at age 10. So far this season, Shoemaker has competed across the national stage multiple times at the Drive, Chip and Putt National Finals in April, The U.S. Women’s Amateur Four-Ball in May, as well as the U.S. Girls’ Junior and the PGA Girls’ Junior National Championship this month. Capturing last year’s title at the age of 12, she was more than likely the youngest winner ever to claim the Bettey Deeley Cup, although the record cannot be officially confirmed.

Shawn Colella, 15, of Bellevue Country Club, was runner-up in the last two NYS Boys’ Sub-Junior Championships where he fell to 2016 winner Jude Cummings and 2017 winner Luke Sample. Collela, who regularly competes in Syracuse District events, was named SDGA Boys Player of the Year in 2016. He also won the Syracuse District Junior Championship for a third consecutive year at Drumlins Country Club last week.

Austin Fox, 18, of Normanside Country Club, finished in a tie for fifth at last year’s championship at 5-over 149. He qualified for the 2017 U.S. Junior Amateur at Flint Hills Country Club where he missed the two-round cut with a 157 (+15). The recent graduate of Bethlehem Central High School will head to the University of Rhode Island and join the golf team this fall. He qualified for the Junior PGA Championship in 2015, 2017, and will return for his final appearance later this month at Valhalla Golf Club in Louisville, Kentucky.

Jimin Jung, 16, of Trump National Westchester, earned runner-up at last year’s MGA Boys Championship after losing to fellow club member Jud Langille in 20 holes at Glen Ridge Country Club. He was the runner-up at the New York State Association of Independent Schools tournament, losing by a shot. Jung, is a published author and wrote a travel journel with his older sister at the age of 6 called “Off We Go for 80 Days”.

Mike Minnehan, 18, of Locust Hill Country Club, finished in third at last year’s championship. The Rochester-area player, was only a stroke out of the sudden-death playoff between Cummings and Sisson, but missed a mid-range birdie putt on #18 to fall short. Minnehan has become a prominent junior in a very short time of playing competitive golf, only doing so for about three years now.

Shane Devincenzo, 17, of Met PGA Junior Golf Club, was a semifinalist during the 2017 Met Junior Championship. He won the 2017 Suffolk Boys Golf County Championship. At the 2018 NYSPHSAA Boys’ Championship, he recorded at top-15 finish and tied for 6th in 2017.

Jud Langille, 16, of Trump National Westchester, recently competed in the 2018 U.S. Junior Amateur but failed to make the stroke play cut. He was the 2017 MGA Boys Champion, defeating last year’s NYS Sub-Junior Champion Sample in the semifinals, 1 up, and Jung in 20 holes during the championship match. He was also the Westechester Golf Association Boys Champion at Knollwood Country Club last June.

Matthew Ferrari, 17, of Met PGA Junior Golf Club, was the runner-up to Adam Xiao at this year’s NYSPHSAA Boys Golf Championship at Cornell University’s Robert Trent Jones Golf Course. He was recognized as The Journal News/ Lohud Player of the Year in 2018.

Ian Rivers, 17, of Links at Erie Village, recently qualified for the 2018 U.S. Junior Amateur at Baltusrol this week and failed to make the two-day cut. He earned the third and final qualifying spot in a playoff against Jason Lohwater of Rochester, securing his trip in two holes.

Erik Stauderman, 18, of the Links at Union Vale, won the 2018 New York State Federation Golf Championship in June at Bethpage Black, on the second playoff hole over NYSPHSAA champion Adam Xiao. He finished top-5 at the NYSPHSAA. The recent graduate of Spackenkill High, will be joining the St. Bonaventure Bonnies golf team in the fall.

Taylor Miano, 16, of Metropolis Country Club, is one of the stronger junior girl players in the Metropolitan area. She was runner-up in the 2017 NYS Girls’ Junior Amateur at 4-over 148 and again last year, finishing at 7-over 151. Earlier this month at the NYS Women’s Amateur, she finished top-10 in the field.

Kailtyn Lee, 16, of Westchester Country Club, recently qualified for the U.S. Girls’ Junior Amateur and headed to Poppy Hills Golf Course in California this past week where she failed to make the stroke play cut. Lee qualified out of Yahnundasis along with defending champion Shoemaker and 2016 champion Lindsay May of Auburn. She also finished in 5th at this year’s NYSPHSAA Girls Golf Championship.

Faith Francioso, 17, of The First Tee at Eisenhower Park, finished tied for runner-up honors with Miano in last year’s championship. The Elon University commit made the cut at the Nassau Country High School Golf Championship last season, the first female golfer to do so since Alix Lowe in 2014.

Jacob Dantonio, 13, of Crag Burn Golf Club, finished in the top-10 in last year’s championship and is the younger brother of Chelsea, this year’s NYS Women’s Amateur runner-up and past runner-up of the Girls’ Junior. Earlier this summer, he claimed the Buffalo District Golf Association’s Sub-Junior Match Play Tournament title at Sheridan Park GC.

Jimmy King, 14, of Mohawk Golf Club, is a top-competitor on the Northeastern New York PGA Junior Golf Tour with numerous top-10 finishes over the past two summers.

Just A Touch Too Old

Jeremy Sisson, of Skaneateles Country Club, was tied for the lead after regulation last year with Cummings, but eventually lost the title in a four-hole playoff and finished runner-up. Sisson qualified for the 2018 U.S. Junior Amateur at Baltusrol this past week and advanced to the Round of 64 (match play), before losing 3&2 to his competitor. The 18-year-old will turn 19 on July 23rd during this year’s championship practice round, leaving him ineligible to compete by a only a day. However, he will be competing in the NYS Men’s Amateur in August at Irondequoit Country Club.

Seven Oaks Golf Club has a rich history which dates back to 1916 when a group of faculty at neighboring Colgate University and some townspeople met to form a local golf club.

This first nine-hole layout, named Hamilton Golf Club was built in 1917-18 and was located on the upper portion of the hill behind the student dormitories.

In 1927, New York City’s Thomas Winston was hired to redesign the original layout. With the transition came a renaming of the course to Seven Oaks in honor of the ancestral home of the Colgate family in England.

Less than ten years later, in 1934, a proposal was made to construct an 18-hole course on the newly-acquired Dunn Farm (where holes 1-12 are currently located). Gene Sarazen was brought on to help design the course, along with a young architect named Robert Trent Jones. Sarazen wanted to create his concept of an “Augusta of the North.”

After decades of struggles to get the project approved, the university found a way to fund the project, and had recently acquired some new essential property, which finally led to the new course’s construction.

The first nine was completed in 1958 and the second nine in 1965. The original course on the hill was closed and the name transferred to the new, modern-day Seven Oaks Golf Club.

The brook-laden Robert Trent Jones original presents a great challenge for any player that navigates the tricky layout.

The NYS Boys’ & Girls’ Junior Amateur Championships have now been conducted on the course for three consecutive years. This will be the fifth time the Boys’ & Junior has been held at the Colgate course, and the sixth time for the Girls’ Junior. The 1983 NYS Women’s Amateur was played at Seven Oaks and the course also plays host to many NYSGA and USGA qualifiers each year. Other notable tournaments have been conducted at the site including ECAC qualifiers, the 1977 NCAA National Tournament, the 2010 Patriot League Championship, the 1990 Ben Hogan Central New York Classic, and more.

Brief History of the Championship

You can find a complete list of past champions for each division by clicking here.