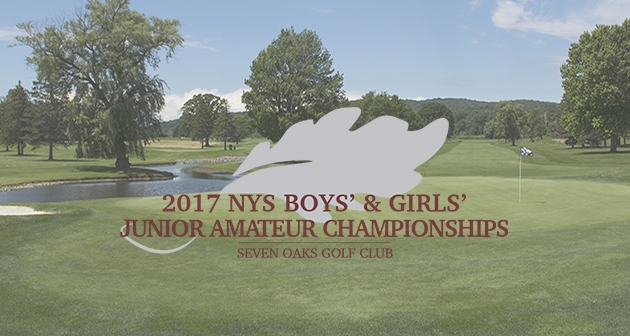 All three championships will run concurrently from Tuesday morning through Wednesday’s finish. This year will be the first time that 18-year-olds can compete in the Boys’ Junior and Girl’s Junior after the recent change in age requirement (17 to 18), made this past off-season in accordance with the USGA’s eligibility changes.

Christian Chapman of Ravenwood Golf Club, will try to defend his title in the NYS Boys’ Junior Championship before heading to the University of Delaware this fall to join the Blue Hens Men’s Golf Team. In 2016, the Victor-native won in dramatic fashion after knocking down a 25-footer for birdie on the par-5 18th, edging the runner-up, Nathan Han of Somers, by one stroke. Last month, Chapman qualified for the 2017 U.S. Junior Amateur Championship at Onondaga Golf and Country Club in Syracuse. At the Championship this week, he missed the 36-hole cut by eight strokes after posting a two-round 156 (+14).

Also in the field is Jude Cummings, winner of the 2016 NYS Boys’ Sub-Junior Championship. The member of Locust Hill Country Club in Rochester, carded a 3-over 147 over two rounds to top the field of 35 by two strokes. Now at age 15, Cummings is too old to defend his sub-junior title and will be competing in the Boys’ Junior division (15-18) this year.

Danny Gianniny, of Pittsford, caught major attention after winning the 2017 International Junior Masters in dramatic fashion at East Aurora Country Club in Buffalo in June. Gianniny chipped in on the final two holes of match play to win the championship 2&1. The victory earned Gianniny entry into this year’s Porter Cup at Niagara Falls Country Club. At last year’s NYS Boys’ Junior Amateur, he ended up in third place at even-par 144. He finished top-10 in 2015’s Championship at Cedar Lake Club. Gianniny will head to St. Bonaventure University next year to join the Bonnies’ Men’s Golf program.

Woodstock Country Club’s Justin Lane won the 2017 New York State Federation High School Championship in early June by shooting a 2-over par 73 at Bethpage’s renowned Black Course (site of the 2017 NYS Men’s Amateur Championship). A week prior, Lane finished tied for sixth in the NYSPHSAA championships at Cornell University’s Robert Trent Jones Golf Course. He was named the (Daily) Freeman Sportsperson of the Year in 2015 after he became the first to win both the Woodstock and Wiltwyck club championships in the same summer. In 2016, Lane qualified for the Junior PGA Championship after winning the NENY section tournament at Town of Colonie Golf Course. The 17-year-has won the Ulster County Men’s Amateur Golf Championships each of the last two years. This fall, Lane will join the Division 1 Binghamton Bearcats Men’s Golf Team as a freshman.

Austin Fox, of Normanside Country Club, qualified for the 2017 U.S. Junior Amateur which was held this week at Flint Hills Country Club where he missed the two-round cut with a 157 (+15). The rising senior at Bethlehem Central High School was named the Times Union Section 2 Golf Athlete of the Year in both 2015 and 2016. In 2015, he qualified for the Junior PGA Championship after winning the NENY section. In last year’s Championship, he finished in the top-10, shooting 3-over 75 in both rounds.

Madison Braman, a recent graduate of Shaker High in Latham who’s headed to William and Mary in the fall, has been gaining local attention in the Capital Area for her impressive ability. She received the 2015 sponsor’s exemption for the local Symetra Tour stop, the Fucillo Kia Championship. This spring, she became the first female player from Section 2 to make the state team since former LPGA star Dottie Pepper of Saratoga Springs in 1983. Braman has won the NENY section’s PGA Junior Championship each of the past three years (2015-17) to qualify for the PGA Girls Junior Championships. In last year’s NYS Girls’ Junior Amateur, she finished in the top-5. Earlier this month at the NYS Women’s Amateur Championship, Braman ended up in the top-10 amongst strong competition.

Taylor Miano, of Dobbs Ferry, is one of the stronger girl players in the Metropolitan area with multiple top-10 finishes in Met section tournaments. She finished as runner-up in last year’s NYS Girls’ Junior Amateur at 4-over 148. She maintained her position in second throughout the two-day championship but could never catch 2016 winner Lindsay May, who won by 8-strokes. With May not competing in this year’s Championship (qualified for the U.S. Girl’s Junior at Boone Valley GC), it presents Miano with a nice opportunity to stake her claim atop the leaderboard once again without anyone to catch.

Bailey Shoemaker, 12, will be competing in her third NYS Girls’ Junior Amateur. The young star from Red Pines Golf Club finished tied for third in last year’s Championship with a 7-over 151. In 2015, she finished in the top-10 at age 10. Both years she was the winner in her age group. Shoemaker has won several major national and worldwide tournaments in her age group, most notably at the 2015 European Championships in Scotland.

Medina High School’s lone girls’ golfer, freshman Melanie Green, captured her first Section 6 golf title this spring after topping the defending champion, Alexis Kim of Clarence, at Tan Tara Golf Club. At the 2017 NYSPHSAA State Championship at Bethpage State Park’s Yellow Course, Green tied for third after a solid two-round score of 145 (+1). She won her age group (14) at last year’s NYS Girls’ Junior after shooting a 22-over 166 and finished the Championship 9th overall. This week, she competed in the 42nd Girls Junior PGA Championship at the Country Club of St. Albans, Lewis and Clark Course where she failed to make the two-round cut.

Johnny Gruninger, of Bellevue Country Club, recently ousted his competitors by 14 strokes at the 2017 Syracuse District Junior Classic held by the Syracuse District Golf Association. The rising freshman at Manlius Pebble Hill was the youngest player to represent a section at this year’s NYSPHSAA Championships at RTJGC where he finished tied for 25th. In last year’s NYS Boys’ Sub-Junior Championship, the Syracuse-native finished tied for 16th with a two-round score of 165 (+21).

Luke Sample, of New York, is a very experienced 14-year-old. He regularly competes on various regional and national circuits including MetPGA, International Junior Golf Tour, American Junior Golf Association and Future Collegians World Tour. He competed in the U.S. Kids Golf World Championship from 2011-2015 and the Callaway/IMG Junior World Championship in 2014 and 2015. This will be his first time competing in a NYSGA championship.

Shawn Colella, of Marcellus Golf Club, was runner-up in last year’s NYS Boys’ Sub-Junior Championship where he fell to 2016 winner Jude Cummings. Collela, who regularly competes in an array of Syracuse District events, was named SDGA Boys Player of the Year in 2016. Earlier this week, Colella won the Syracuse District Junior Championship for a second consecutive year.

Eligibility: Entries are open to male and female amateur golfers who are either (1) residents of New York State or (2) members of an NYSGA Member Club. The age requirements for each championship division are set as of July 25, 2017: Boys’ Junior (15-18), Boys’ Sub-Junior (14 & Under), Girls’ Junior (18 & under).

As one of the top collegiate courses in America, Colgate University’s Seven Oaks Golf Club has quickly earned the respect of countless golfers who’ve set foot on the Robert Trent Jones, Sr. design over the years. The pristine, brook-laden course nestled on an old farm northeast of campus, presents a true challenge for golfers. The layout includes various water hazards that meander along twelve of eighteen holes along with forty-two bunkers that help protect the lush, tricky green complexes. Seven Oaks has hosted an array of high-profile tournaments including USGA qualifiers, NYS championships, the 1990 Ben Hogan Central NY Classic, the 1977 NCAA National Tournament, the 2010 and 2015 Patriot League championships, and numerous PGA section events.

History of the Championship