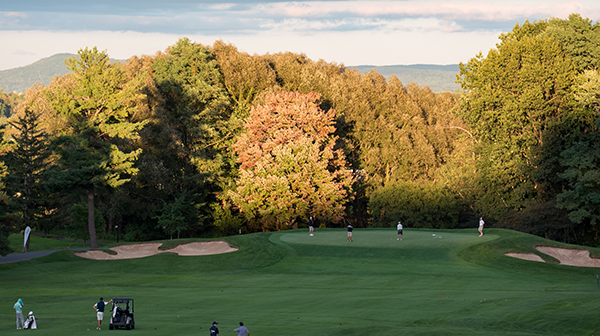 Pizzutelli/Foster Share Lead After One Round of NYS Mid-Am

ALBANY, N.Y. - After one round of the 37th NYS Men’s Mid-Amateur Championship, Jimmy Pizzutelli and Ryan Foster share the lead after each firing two-under 69 at Shaker Ridge Country Club on Friday afternoon.

After over two inches of rain on Thursday night that carried into Friday morning, the first round was postponed to a 1 p.m. shotgun start. Though the course conditions were not reflective of the downpour, according to Pizzutelli.

“It was soft conditions obviously, my first time playing the course,” he said. “The greens are very, very tough. A lot of grain was involved with them. I made sure that I played it short of the pin as much as I could.”

Foster added, “The course played great considering the rain we got.”

Pizzutelli, a member of Park Country Club, sank five birdies during his round, including three on the back nine.

“The longest putt I made was five feet, so the wedge game was pretty good, which with limited practice, I was surprised by it but I played the number,” Pizzutelli said. “With the softer conditions you can attack the pin.”

Despite not playing a practice round, Pizzutelli felt confident around the greens, due to his set up shots with wedges.

“The wedge game was pretty good today as long as I played the number,” Pizzutelli said. “I didn’t play a practice round, unfortunately. I probably should’ve, because this place is tricky.”

He described how his putting was working well, though there were a couple instances where he was in between clubs on approach shots.

“I had a decent amount of 4-6 foot par saves and birdie putts. I was happy with the putting. I think I need to clean up my drives a little bit and my iron striking was good too,” Foster said. “My first six or seven holes I thought that I had too many in between club shots. If I can try to eliminate that a little bit I think I will be able to go at the pin a little bit better.”

Trailing one stroke behind the leaders are Bobby McCartney of RDGA eClub and Carl Schimenti of Cornell University Golf Course, who each shot 70.

“The beginning of the round felt pretty good, the greens were really slick, though I wasn’t too aggressive with my putting,” McCartney said. “Just made some easy pars and hit a bunch of greens in the beginning, then kind of just grinded it out mid-round. I kind of lost focus a bit, but made some really good up and down’s. Snuck in a birdie, then grinded out the rest of the round.”

McCartney parred every hole except for No. 12, which he birdied.

“You just couldn’t be aggressive with anything downhill so I just made sure I secured my two putt,” McCartney said. “I like the course, it’s actually similar to the one I won the Rochester Mid-Am

Similar to Pizzutelli, McCartney found his success in his approach shots that set up his putts.

“I hit a ton of good approaches. I probably hit between 10 and 20 feet most of the day. Just couldn’t get too many putts to fall but I had some key putts that fell to keep me right around one-under for the day.”

Chris Blyth of Locust Hill Country Club shot even-par to round out the top five headed into Saturday’s second round.