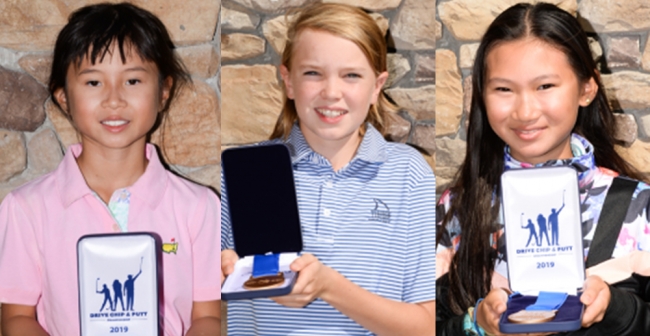 Queensbury's Braydon Dock finished tied for second in the Boys 12-13 age group. He won the putting category within his group after holing his second and final putt. The closing ten points boosted his total to twenty, just two shy of the group winner.

Alexandra Phung of Forest Hills finished tied for third in the Girls 7-9 age group with 20 total points, only three points behind the winner. Her older sister Amelie Phung, tied for fifth in the Girls 12-13 age group with 17.5 points. It was Amelie's second consecutive appearance in the National Finals (she also qualified for the 2019 event).

AUGUSTA, G.A. – Three talended young players from New York State are headed to Augusta National Golf Club on Sunday, April 4th, 2021 for the 7th annual Drive, Chip & Putt (DCP) National Finals, which was rescheduled from 2020 due to the COVID-19 pandemic.

The trio will be among eighty junior golfers representing 30 U.S. states, two Canadian provinces and France, all whom qualified through three different stages (local, sub-regional, regional) in 2019.

The Empire State representatives include Alexandra Phung of Forest Hills (Girls 7-9) who qualified for the 2019 DCP Nationals, along with her older sister Amelie Phung (Girls 12-13), and Braydon Dock of Queensbury (Boys 12-13). They all advanced through the Regional Qualfier at TPC River Highlands in Cromwell, Connecticut in 2019.

“It’s really amazing the we were both able to step up on the same day, handle the pressure and everything,” said Amelie to DCP media.

“I’ve never been to Augusta, and I’m really excited to go,” said Dock. “I don’t care how well I do, I just want to be there.”

2019 qualifying began at the local level in May of 2019 at 300 sites around the U.S. The top-three scorers per venue, in each of the four age categories separated into boys and girls divisions, advanced to one of the 60+ subregional qualifiers in July and August. Two juniors in each age and gender division then competed at the regional level in September, held at some of the top courses in the country. Finally, the top finisher from each of the 10 regionals earned a place in the National Finals.

In New York, the list of the 2019 DCP qualifying host courses included:

For information on local qualifying around NYS in 2021, click here.