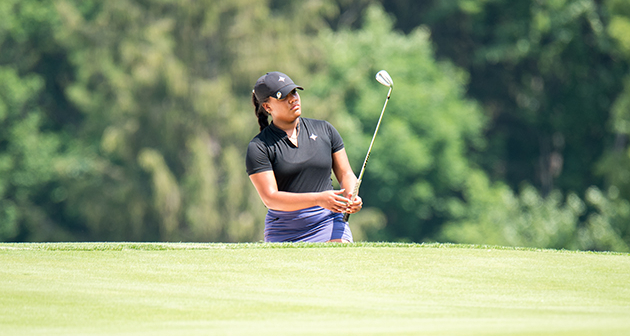 ROME, N.Y. – Kyra Cox of Centennial Golf Club carded a three-under 70 and holds a two-stroke lead after the opening round of the 91st New York State Women’s Amateur Championship at Teugega Country Club in Rome, NY.

Cox shot a 37 on her front nine, and surged on the back, posting four birdies.

“It was a good round,” she said. “I just stayed comfortable. It was a great course with a lot of opportunities, so I kind of took advantage of that. A lot of clutch putts.”

The two-time champion (2015 and 2018) noted that the greens were especially quick on Monday. On holes 8 and 13, both par-fours, she was able to sink tough putts.

“The greens are definitely really fast. Really difficult,” she said. “My game plan changed a few times to adjust to the speed of the green...those were some clutch putts on some tricky par fours.”

Cox said there were a couple instances where she could have fallen off, holes 12 and 16.

“I chunked my second shot going into (the 16th green). It was sixty yards going into my approach shot. I really scrambled there, stuck it to a foot to save par. Saved par again on 12. Had another tricky downhill putt. Left myself ten feet, but made that ten foot putt for par.”

Claire Yioulos of Oak Hill Country Club, currently sits in the second spot after shooting one-under 72. She holed out for an eagle on the tough par-4 sixteenth hole, then birdied the eighteenth to propel her up the leaderboard.

“I was debating between driver and three wood, and went with my three-wood,” she described. “I smoked it, honestly. I had a little bit of a sidehill lie. Hadn’t really had that type of shot before, but my dad coached me through it and it came out really, really well. It one-hopped the front and went in.”

Julia Zigrossi of Ridgemont Country Club, opened with even par (73) in her first NYS Women’s Amateur appearance. The 15-year-old finished with three birdies, and nearly aced the seventh hole -- a downhill par-three.

“I hit it a little left, took the slope and it landed a couple inches away from the hole,” she said of her tee shot.

She shared the sentiment with several players that hole 16 caused some stress, in addition to 17.

“I was not expecting 16 to be so slopey down the hill,” said the 2020 Rochester District Women’s and Girls’ Junior champion. “I thought the back nine was significantly harder than the front. Hole 17 was probably the hole I struggled with the most because I hit the drive wide right and I was in the long grass so I had to punch out.”

She added, “(Putting) is a key thing that I want to bring into tomorrow. That helped me a lot today. I would say my score was my score because of my putting.”

31 players advanced through the 18-hole cut and will compete over 36 holes on Tuesday to finish the championship.

In the first round of the 12th New York State Women’s Mid-Amateur, Mary Jo Kelly of Wolferts Roost Country Club and Christy Schultz of Oak Hill Country Club lead the field by two strokes, at one-over 74.

Kelly started strong, shooting two-under through the first seven holes with a pair of birdies. Another par on eight and a bogey on nine put the 1980 NYS Women’s Amateur champion at one-under for the front nine.

“It was hot, and you really have to think on every shot of this course,” Kelly said. “The driver, the second shot, the approach shot. I did that great for 15 holes.”

Walking to the 16th tee box, Kelly was leading the pack at three-under. However, she went four-over for the final three holes, ending her day with a 74.

“The first 15 holes were pretty good,” Kelly said. “I hit a lot of greens. The last three holes, I don’t know what happened.”

Kelly also pointed out that she may have gotten ahead of herself to finish out the back nine. Heading into the final 18 on Tuesday morning, she is focused on “finishing the round,” in hopes of taking home another NYS championship.

Schultz admitted she was nervous until about the fourth hole of her round on Monday, having not competed in a tournament in two years. She birdied the first hole, followed up by bogeys on two and three.

“It was up and down for sure,” said the two-time Mid-Am champion (as well as 3x Women’s Am titles and 2x Girls’ Junior titles). “I was nervous, truth be told...Once I settled down, I got into a groove, especially on the back nine.”

Schultz birdied holes 11 and 15 on the back nine, pushing her to even as she approached the 16th, one of the more troublesome holes on the Donald Ross design.

“Sixteen is just a weird hole, especially from our tee box,” she said. “I just mishit my tee shot and got in trouble around the green, and made a 7, so that was rough.”

Although she rebounded to post a par on the 17th hole and an eagle on the 18th, catapulting her to hold a share of first place.

“I could’ve totally fallen off a cliff there but I fought back,” Schultz said. As golf is, you have some good holes and some bad holes but I came back with a par on 17 and then an eagle on 18, so that was a nice way to finish.”

“It started off a bit slow,” Kahler said. “I was lucky to get up and down on a lot of holes. I relied a lot on my short game, chipping and putting. I hit the ball better in the back.”

The Mid-Amateur division played the course at 5,683 yards and to a par of 73.