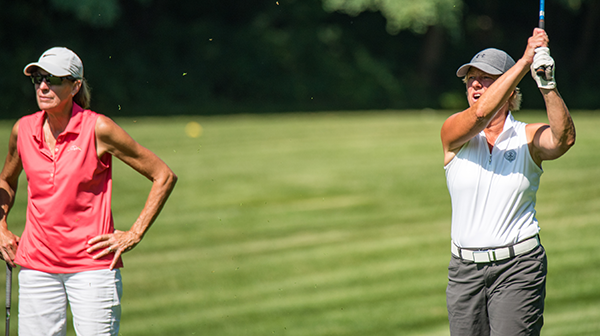 GUILDERLAND, N.Y. - After one round of the 68th New York State Women’s Senior Amateur Championship, Kim Kaul and Teresa Cleland share the lead in the clubhouse, each shooting five-over 77 at Pinehaven Country Club on Tuesday.

Cleland, a member at Bellevue Country Club, earned a birdie on the front and back. After the effects of Hurricane Henri cancelled the practice round on Monday, it took her time to adjust to a course she had never played before.

“I knew right off the bat that I had to keep the ball in play because the rough was really penalizing,” Cleland said. “I did have a double bogey, I got in the rough and tried to pull off a shot from there that was just not a good shot and ended up in the bunker and two-putted for a double so that was really a mental thing.”

The seven-time NYSGA champion noted that her putting was strong.

“I felt like I really made some saves when I got in trouble, but just a different strategy I’ll use tomorrow to keep shots into greens and keep that driver in play,” Cleland said.

Kaul, a member of East Aurora Country Club, posted three birdies. After bogeying three of her first four holes, she shot two-over over her next 12 to help her finish atop the leaderboard.

“I started out pretty well, then we made the turn and made a couple bad swings, doubled a few holes, and just felt like I was grinding a bit,” Kaul said. Then all of the sudden, I made a couple nice swings, had a couple birdies, so I turned it around.”

Kaul also noted her putting stood out above her drives and chips.

“I missed a couple putts that I wish I could’ve had back but I thought I putted pretty well to save par,” Kaul said. “I got up and down a couple times.”

Cleland and Kaul, who have each won the NYS Women’s Senior title twice, were paired together along with 2018 champion Tammy Blyth (Monroe Golf Club) and 2019 champion Mary Sicard (Queensbury Country Club).

“It was a great group, here we had all state champions in it,” Cleland said. “It was a lot of fun and a lot of banter and keeping it light.”

Mary Scatena of the host club Pinehaven and Carolyn Mancini of Binghamton Country Club each shot a 78 to hold a share of third place. Nancy Kroll (Schenectady Municipal Golf), the 2014 Senior champion, rounds out the top five at seven-over 79.

In the concurring 14th NYS Super Senior Amateur Championship, Mary Jo Kelly (Wolferts Roost Country Club) holds the lead in the clubhouse after one round.

“I was disappointed in how I played today,” Kelly said. “I didn’t have a very good front nine, lots of putts, lots of missed greens with short irons in my hand and then I failed to get up and down.”

Kelly, who is competing as a Super Senior for the first time, shot six-over 78 and was able to sink her lone birdie on the seventeenth hole.

She noted that the greens were difficult and fast. Also, she left her driver in the bag for the majority of her tee shots.

“I hit a lot of five woods off tees,” Kelly said. “I think I only hit driver three times today. I had short irons and I should be hitting every green in regulation.”

Tomorrow, golfers will complete their last round of 18 holes, with a shotgun start set at 9 a.m.