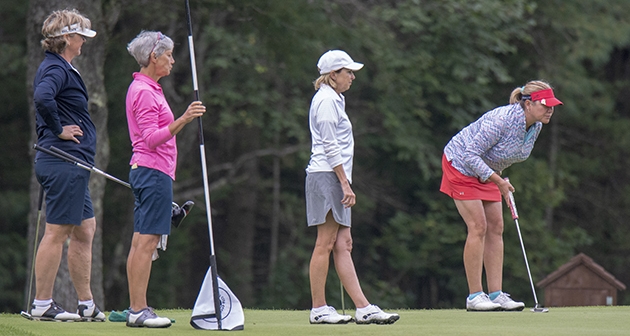 Past Champions In Position to Reclaim Titles at Thendara

THENDARA, N.Y. – Two are tied atop the leaderboard at 78 after the opening round of the 2018 New York State Women’s Senior & Super Senior Amateur Championships hosted by Thendara Golf Club.

The duo includes past champion, Kim Kaul of Gowanda Country Club and last year’s first-round leader Tammy Blyth of Monroe Golf Club, both at 5-over.

Defending champion, Mary Sicard, who won the last two consecutive titles at The Whiteface Club (2016) and Corning Country Club (2017), is one stroke off at 79. Carolyn Mancini of Binghamton Country Club joins her at that number and they'll be paired with Kaul and Blyth in the leader group.

Sicard, of Queensbury Country Club, who came from behind in last year’s championship to win by a stroke (after an even-par 74), is satisfied with her opening-round score, and prefers to be chasing the leader headed into Wednesday.

“Definitely difficult to come in as two-time champion because there’s a lot of pressure on you to three-peat. I was happy overall with how I played and I’m right where I want to be. Tomorrow’s another day, we’ll just come out and see what happens,” said Sicard.

She would have to outplay Kim Kaul, who’s also won a couple of Women’s Senior titles, with her first at Holiday Valley Country Club in 2008 and the second at Thendara in 2015.

First-year Super Senior, Kitty Colliflower of Oak Hill Country Club, and past champion Michelle Marquis of Pompey Club, are one stroke off at 7-over 80 and will join the co-leaders in the final pairing.

Three more players are within five strokes including Judy Rivizzigno of Skaneateles Country club at 81, Cindy Delappa of Queensbury Country Club at 82, and Kathy Emison of Ontario Country Club at 84.

Although her game has been inconsistent this season, she was able to play very steady in today’s round and put herself in the driver’s seat to potentially reclaim the title at the Adirondack Park course.

“I always enjoy being here. It’s exciting because I haven’t been playing that well,” she said of being a co-leader headed into the final round. “My golf game hasn’t been that great this summer, very inconsistent.”

Tomorrow, both championship fields will be conducted in a shotgun format and sent off their designated holes at 8:30am. Groups will be paired as foursomes, with both field’s leader groups starting on #1.