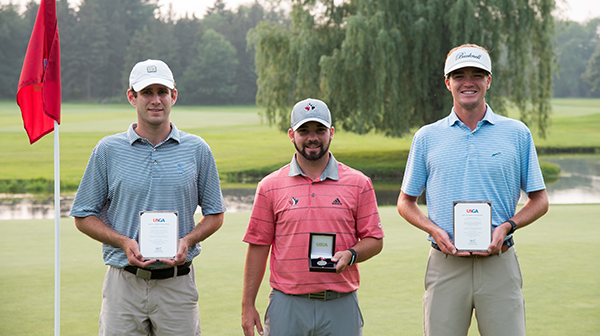 This group of players will advance to the 121st U.S. Amateur Championship in August. The USGA-conducted championship will be contested at Oakmont Country Club in Oakmont, Pennsylvania.

Papineau was the qualifying medalist, finishing nine-under 135 over two rounds on Monday. In what could have been potentially his last shot to qualify for the U.S. Amateur, he delivered the best performance of the day, dropping ten birdies and finishing with just one bogey -- his very last hole.

“It was a good day. Everything was working well,” he said following his second round.

Papineau has come close to qualifying for the U.S. Amateur before, being named first alternate twice.

“I was supposed to play at Bandon Dunes but I had to pull out a couple days before because I had knee surgery,” Papineau said. “This will be my first (U.S. Amateur) and also probably my last one because I’m turning pro next year. It’s awesome that I can play in it this year.”

Papineau held a one-stroke lead heading into his evening round, which quickly blew open after the Canadien birdied on his first four holes. From there, he played scratch golf until the last hole, where he suffered his only bogey.

“I didn’t try to just play safe after that, I just kept playing my game. I had good thoughts and good shots all day long.”

Barone nearly caught up, earning birdies of five of his first seven holes of his second round. He ended shooting seven-under 137. The Temple University graduate’s best stretch of nine holes came on the front nine of his second round, where he shot four-under 32.

Bradbeer landed within the top five after one round, shooting two-under 70. An eagle on the fifth hole of his evening round started to push him up the leaderboard. Three birdies on the back nine allowed Bradbeer to finish on his best nine hole stretch of the day, three-under 33, while allowing him to earn the last qualifying spot – shooting six-under 138 for the day.