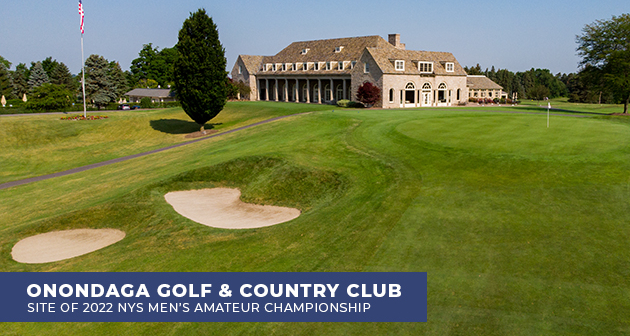 The 99th edition of the NYSGA’s flagship tournament, the NYS Men’s Amateur Championship, will be contested at Onondaga Golf & Country Club in Fayetteville, August 9-11 (rescheduled from 2020 after COVID-19 pandemic cancellation). The club was established in 1898, and the golf course later designed by renowned golf course architect Walter Travis. This historic facility has offered its golf course for a total of ten state championships throughout the years, including previous Men's Amateurs in 1940 and 1961, Women's Amateurs in 1937, 1948 and 1949, a Men’s Mid-Amateur in 2013, the inaugural Boys’ Junior Amateur in 1931, the Women’s Senior Amateur in 1989, and Men’s Senior Amateurs in 1940 (inaugural), 1983 and, most recently, in 2015.

For the first time since 2016, a new golf course will home the NYS Boys’ & Girls’ Junior Amateur Championships in 2022. Soaring Eagles Golf Course at Mark Twain State Park will host this year’s championship, July 26-27. The state park course was built in 1963 and has previously hosted the Boys’ Junior & Sub-Junior Amateurs three times in 1973, 1979 and 1983. This will be the course's first time hosting the Girls' Junior Amatuer.

The 69th NYS Women’s Senior Amateur & 15th Super Senior Amateur Championships will be welcomed by RaNic Golf Club in Ithaca, August 23-24. The course, formerly the Country Club of Ithaca until it was renamed in 2020, was first established in 1900, and the current golf course was built in 1958 by Geoffrey Cornish. This will be their first time hosting the Women’s Senior, but the club has previously hosted Girls’ Junior Amateurs in 1973 and 1994, as well as the Women’s Amateur in 1973 and, most recently, 2013.

Stafford Country Club is this year's host of the 4th NYS Women’s Amateur & Senior Amateur Four-Ball Championships on June 13. The greater Rochester area course was built in 1921 and is another fantastic Walter Travis design. The club has previously hosted a Girls' Junior in 1966, the Boys' Junior and Sub-Junior Amateurs in 1975 and 1981, a Women’s Amateur in 1993, the Men’s Senior Amateur in 1988, 1999, and 2009, and, most recently, a Men's Mid-Amateur in 2016.

Finally, the 9th NYS Amateur & Senior Amateur Mixed Team Championships will be contested at Transit Valley Country Club in East Amherst on June 7. The club was established in 1921 and has previously hosted one NYSGA championship, the 2002 Men’s Amateur.

The NYSGA would like to thank the leadership and staff at each of this year’s host clubs for their support of the association and in helping to continue the tradition of great competitive amateur golf in New York State.

Tournament registration opened on April 1st via Golf Genius tournament websites, which you can access by clicking here.