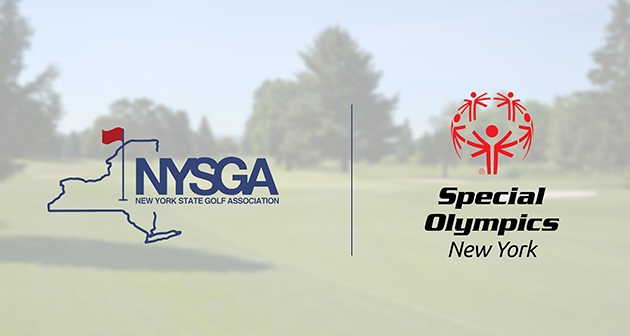 JAMESVILLE, N.Y. – The New York State Golf Association (NYSGA) and Special Olympics New York today announced a partnership to support the growth of inclusion within the golf industry, and to bring an unprecedented level of sophistication to Special Olympics golf programming statewide.

“We’re excited to partner with the Special Olympics and provide additional support to their golf programming,” said Bill Moore, NYSGA Executive Director. “It’s impressive what they are already able to provide for their community of athletes, and we hope that the utilization of these resources will help bring their training and tournament administration to the next level.”

“I cannot overstate how much it means to our golf athletes and coaches to be using the same handicapping system and tournament technology used by golfers throughout New York and the world,” said Special Olympics New York President & CEO Stacey Hengsterman. “We are so fortunate to have found a champion and partner in the New York State Golf Association. Our partnership is further proof that in the game of golf and world of sports, all people of all abilities can compete.”

More than 3,100 Special Olympics New York athletes play golf throughout the state, supported by more than 140 volunteer coaches. Approximately 500 of those athletes belong to training clubs in their communities, making them eligible for Special Olympics competitions at the local, regional and state level.

Special Olympics New York currently uses a self-built divisioning system to level the playing field for golfers at its larger competitions, including its signature State Fall Games, which can include up to 100 individual golfers. Though incredibly innovative and efficient, the current system can be cumbersome and time-consuming to use.

“These two technologies provided by NYSGA are going to be a real gamechanger for our athletes, coaches and competitions,” said Charlie Jones, a Special Olympics New York coach from CITY who serves as the statewide sport director for golf. “Being a part of the World Handicap System will be especially beneficial to athletes this year, while Special Olympics training is suspended but people can still get out there and golf. It’s a wonderful resource for athletes who want to track their own scores, improve their game and even see how they’re measuring up against their peers throughout the state.”