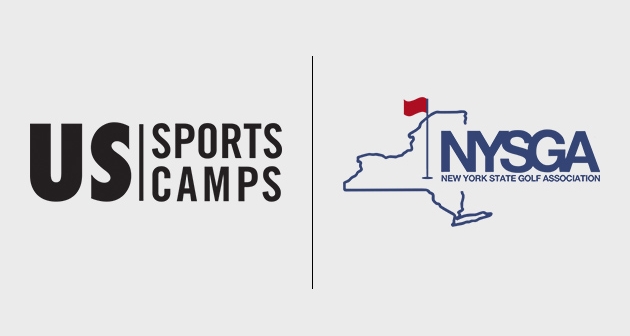 JAMESVILLE, N.Y. – The New York State Golf Association announced a new relationship with US Sports Camps, the largest operator of sports camps in the world, as an official junior golf partner of the NYSGA.

The NYSGA has worked closely with US Sport Camps over the past couple of years, promoting their popular Nike Junior Golf Camps and the newer Golf Channel Academy Junior Camps, which are held each summer at various accessible venues around the Northeast. In 2018, the relationship will continue to grow and USSC will have a larger marketing presence and stronger connection with the NYSGA moving forward.

“US Sports Camps has been an industry leader for as long as I can remember. Shortly after graduating from Notre Dame in 1996, I coached at the Nike camp held on campus and was very impressed with the overall experience and opportunity for campers,” said Bill Moore, NYSGA Executive Director. “We are looking forward to our continued relationship to further promote the development of junior golf.”

Last year, the organization operated over 600 camps in 20 different sports attended by approximately 90,000 campers. The company’s mission is simple, but effective:

To connect passionate coaches with young athletes to facilitate athletic and personal development in a positive and safe environment while consistently exceeding the expectations of our customers.

Their golf camps offer a variety of programs designed for the needs of each camper. Juniors have the option to select beginner or advance, as well as day or overnight camps. Every facet of the game of golf is covered during camps and players can immerse themselves in the sport for an entire week among peers, friends, and a team of expert coaches.

“NYSGA has been a true supporter of our junior golf camps and we look forward to enhancing our relationship in 2018," said Nick Brunner, VP of Golf & Rugby. Our programs are dedicated to providing the perfect balance of golf instruction and fun, utilizing some of the game’s best teaching professionals. Several of our most popular junior camps are located in the Northeast which are ready to serve golfing families across New York.”

This upcoming summer, three camps will be held in the metro-New York/Long Island area including:

Additional camps will be held around the northeast including:

We encourage any junior golfer who’s looking to sharpen their skills and take their game to the next level this summer to check out the options above!

For more information about US Sports Camps, please visit their golf camps page at https://www.ussportscamps.com/golf

About US Sports Camps

US Sports Camps (USSC), headquartered in San Rafael, California, is America’s largest sports camp network and the licensed operator of Nike Sports Camps.  The company has offered summer camps in the U.S. since 1975 with the same mission that defines it today: to shape a lifelong enjoyment of athletics through high quality sports education and skill enhancement. Nike Junior Golf Camps is a division of US Sports Camps, Inc. NJGC offers junior overnight and day camps, as well as advanced player camps at over 130 locations nationwide. Since 1994, more than 200,000 junior golfers have participated in the camps.

The NYSGA is an Association of Member Clubs, represented by over 130 Committee Members, that exists with the purpose of promoting and conserving the traditions of golf throughout New York State. Each year since its founding in 1923, the NYSGA has conducted New York State's (NYS) Amateur Championships. The seventeen current Championships, for all genders and ages, are played on the courses of premier NYSGA Member Clubs. The NYSGA also conducts local qualifying for NYS and United States Golf Association Championships and runs a season-long series of single-round handicapped events, known as the NYSGA Amateur Series. In addition to conducting tournaments, NYSGA also provides member services such as Handicapping, Course Rating & Measuring, Scholarships, Training, Education, and Communications.