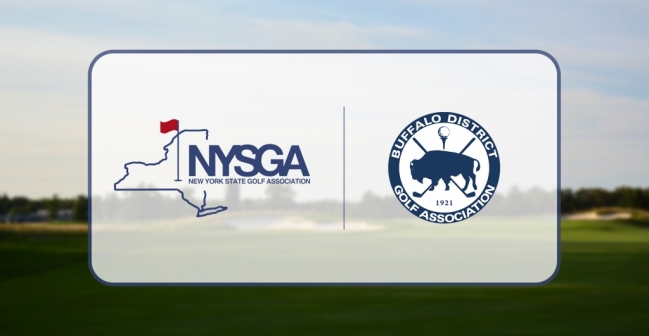 JAMESVILLE, N.Y. - The New York State Golf Association has formed a new relationship with the Buffalo District Golf Association that will integrate the services and efforts of the two associations starting in 2018.

This associations’ partnership was formed to provide area golfers with an exceptional experience at all BDGA competitions. The NYSGA and BDGA will also work together on course ratings, volunteer training, business operations, communications and technology efforts.

“We are excited to collaborate with the BDGA to serve the game of golf in Western New York.  The BDGA has a proud history of great clubs, golfers, and championships. We have much to gain by working together to make the golf landscape more efficient for both our member clubs and golfers in the region,” said Bill Moore, Executive Director of the NYSGA.

While this collaboration will integrate many of the services of both organizations, the BDGA will maintain their independence and identity that has served Greater-Buffalo area clubs and golfers for nearly a century.

“This is an exciting time for the amateur golfers of Western New York,” said Mark Rydza, Executive Director of the BDGA. “Thanks to our new collaboration with the NYSGA, our two associations will work together to make tremendous improvements to our tournaments, junior golf, our scholarship program and all other projects we undertake.  The future looks very bright for the BDGA as we continue to grow and progress for the benefit of all area golfers.”

The BDGA has released a new website (www.buffalogolf.org) and a new online registration system for its 2018 tournaments. Both offer a clean design which focuses on easy navigation for all golfers.

The BDGA serves the amateur golfer in the seven counties of the Western New York region and the Niagara Peninsula of Canada. Since its inception in 1921, the BDGA has run a series of tournaments each year for men, women, boys and girls. Although conducting amateur tournaments is a major part of the BDGA’s efforts, the highlight of the association’s service to the golfing community is the junior program. The BDGA has given nearly $500,000 in scholarships to college-bound BDGA golfers over the years.  Junior match play and a stroke play tournaments for boys and girls are run annually, along with the Interclub program (which is a weekly league competition between clubs/courses). In addition, the BDGA has also serviced the region in the past with course ratings, rules, amateur status, etc. and will continue any support the association can provide to the players, clubs and courses in the BDGA area.

The NYSGA is an Association of member clubs, represented by over 130 committee members, that exists with the purpose of promoting and conserving the traditions of golf throughout New York State. Each year since its founding in 1923, the NYSGA has conducted New York State's (NYS) Amateur Championships. The seventeen current championships, for all genders and ages, are played on the courses of premier NYSGA Member Clubs. The NYSGA also conducts local qualifying for NYS and United States Golf Association Championships and runs a season-long series of single-round handicapped events, known as the NYSGA Amateur Series. In addition to conducting tournaments, the NYSGA also provides member services such as handicapping, course rating & measuring, scholarships, training, education, and communications.

For more information, or if you have any questions regarding the new partnership, please contact the NYSGA offices at (315) 471-6979 or email communications@nysga.org.