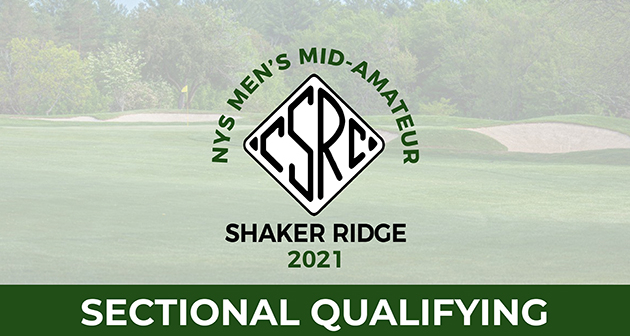 To be eligible, a player must have a Handicap Index not exceeding 10.4, and must be a member of the NYSGA, defined as either (1) belonging to an NYSGA member club or (2) joining the NYSGA as a 2021 NYSGA eClub Member.

Sectional qualifying, played over 18 holes, will be conducted at nine sites around New York from Saturday, August 21 to Friday, September 10 at the following venues:

( ##/## denotes the number of players competing for an allocated number qualifying spots at each site.)

There will also be a “last chance” qualifier on September 22nd, at a course to be announced. The Sunday qualifier will be open to all players, even those who have previously attempted to qualify. A limited number of spots will be allocated to this qualifier and will be announced later.

Shaker Ridge Country Club has hosted a couple New York State championships in the past, including the 2004 Men’s Mid-Am and 1997 Boys’ Junior and 14U Junior Amateur.

E1. Winners of the NYS Men's Mid-Amateur Championship from the last 20 years.

E2. From the 2019 NYS Men's Mid-Amateur Championship, the 20 lowest scorers and anyone tied for 20th place.

E3. Winners of the NYS Men's Amateur Championship from the last 10 years.

E7. Most recent (as of September 22, 2021) winner or low amateur (*professional events) of the following regional championships:

E8. From the 2021 Monroe Invitational, any player who advances through the 36 hole cut.

E10. Players ranked in the top-4000 of the World Amateur Golf Rankings (WAGR).

E11. Players qualifying for most current (as of September 22, 2021) USGA Championships.

E13. Special exemptions as selected by the NYSGA.