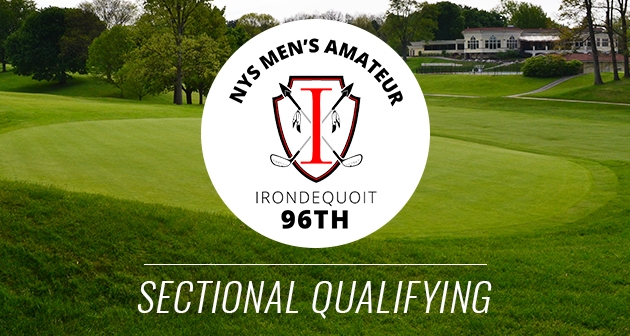 JAMESVILLE, N.Y. – The New York State Golf Association (NYSGA) has accepted a total of 430 entries for the 96th New York State Men’s Amateur Championship at Irondequoit Country Club in Pittsford, N.Y. The NYS Men’s Amateur will be held in Rochester for the 14th time on August 7-9.

To be eligible, a player must have a Handicap Index not exceeding 7.4, and must be a member of the NYSGA, defined as either (1) belonging to an NYSGA member club or (2) joining the NYSGA as a 2018 NYSGA eClub Member.

Among this year’s total are 32 players, including 5 past champions, and 9 other New York State titleholders, who are fully exempt into the championship.

Sectional qualifying, played over 18 holes, will be conducted at 11 sites around New York from Tuesday, June 26 to Thursday, July 12 at the following venues:

There will also be a Sunday qualifier conducted on August 5th at a Rochester-area club (to be decided). The Sunday qualifier will open to players who have not already attempted to qualify at a previous site. A limited number of spots will be allocated to this qualifier and will be announced later.

This will be the first time the championship will be conducted at Irondequoit Country Club. The club has hosted one other NYSGA championship, when it held the NYS Girls’ Junior, won by Cathy Morse, in 1972.

The last time the NYS Men’s Amateur was held in Rochester was in 2011 when it was conducted on Oak Hill Country Club’s West Course, and won by two-time champion and now PGA Tour player Dominic Bozzelli.

E1. Winners of the NYS Men's Amateur Championship from the last 10 years.

E2. From the 2017 NYS Men's Amateur Championship, the 20 lowest scorers and anyone tied for 20th place.

E3. Winners of the NYS Men's Mid-Amateur Championship from the last 5 years.

E4. From the 2017 NYS Men's Mid-Men's Amateur Championship, the 5 lowest scorers and anyone tied for 5th place.

E7. Winner and runner-up of the 2018 NYSPHSAA Boys' Golf Championship.

E9. Most recent (as of August 7, 2018) winner or low amateur (*professional events) of the following regional championships:

E12. Players ranked in the top-1500 of the World Amateur Golf Rankings (WAGR).

E14. Special exemptions as selected by the NYSGA. Must have filed an entry by June 19, 2018. The submission of request along with playing resume must be received by Andrew Hickey (andrew@nysga.org) by June 1, 2018.  Players must select a qualifying site at the time of entry.