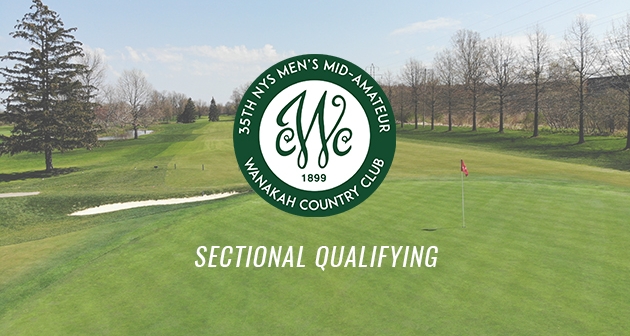 JAMESVILLE, N.Y. – The New York State Golf Association (NYSGA) has accepted a total of 284 entries for the 35th New York State Men’s Mid-Amateur Championship at Wanakah Country Club in Hamburg, N.Y. The Championship will be held in Buffalo for the sixth time on September 28 – 30, 2018.

To be eligible, a player must be 25 years of age or older and have a Handicap Index of 9.4 or less. In addition, players must be a member of the NYSGA, defined as either (1) belonging to an NYSGA member club or (2) joining the NYSGA as a 2018 NYSGA eClub Member.

Among this year’s total are 28 players, including 7 past champions, and 5 other New York State titleholders, who are fully exempt into the championship.

Sectional qualifying, played over 18 holes, will be conducted at 9 sites around New York from Monday, August 20th to Thursday, September 6th at the following venues:

There will also be a Thursday qualifier on September 27th at the host club, Wanakah Country Club. The Thursday qualifier will be open to players who have not already attempted to qualify at a previous site. A limited number of spots will be allocated to this qualifier and will be announced later.

The last time the NYS Men’s Mid-Amateur was held in Buffalo was in 2010 when Tim Hume of Cheektowaga won it at Crag Burn Golf Club in East Aurora.

Exempt Players who have accepted their entries the 2018 field (as of August 17th):