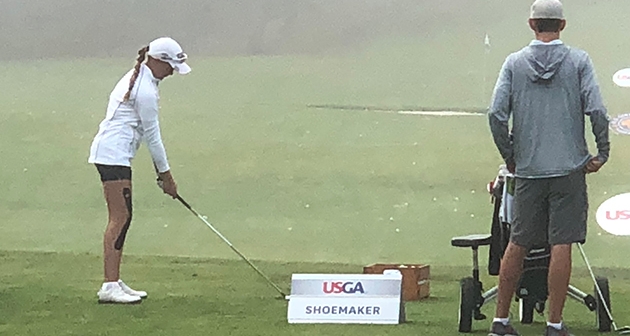 The players included Melanie Green of Medina, Kaitlyn Lee of Scarsdale, Lindsay May of Auburn, Lauren Peter of Carmel and Bailey Shoemaker of West Edmeston.

An 11-over 153 over the two stroke play qualifying rounds was two strokes shy of the cut line for Green and Peter, who both finished on that number.

Qualifying medalist Shoemaker, as well as Lee and May qualified for the championship out of Yahnundasis Golf Club in June. The two alternates at that site were Webster’s Mikah McDonnel and Syosset’s Malini Rudra.

Peter, qualified at Steel Club in Hellertown, PA. and captured the third qualifying spot with a 73. Green also qualified out of a Pennsylvania course, Windber Country Club in Salix and advanced in a 3-for-2 playoff when herself and two others tied at 74 for co-medalist honors.

Alice Hodge of Larchmont, was first alternate out of the Crumpin-Fox Club qualifier in Bernardston, Massachussets.

Up next for both defending champion Shoemaker, and Lee is the 56th NYS Girls’ Junior next week at Seven Oaks Golf Club in Hamilton, NY. McDonnell and Rudra, both earning alternate spots, will also be competing in the championship.