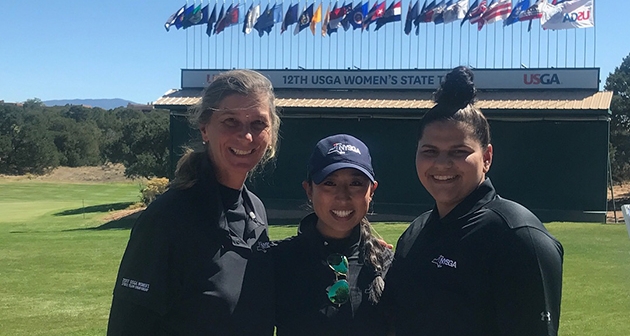 This national championship ­­has been held biannually since its inception in 1995, although this will be the final time it is administered. It began as part of the USGA’s 100-year anniversary and alternates between men and women.

The format of the Championship is 54 holes of stroke-play, counting two of the lowest three individual scores for each round. A cut after 36 holes will be made to the low 21 teams and ties, plus any individual who is within five strokes of the lead.

The trio representing New York State in the Championship are as follows:

Ina Kim, 33, of Manhattan, won the 2016 WMGA/MGA Women’s Met Amateur Championship and the Met Amateur Stroke-Play Championships. This year, she repeated as the Stroke-Play champion and competed in the US Women’s Amateur at San Diego Country Club. Originally from California, Kim has seen her fair share of success over the years with a runner-up finish in the 2000 U.S. Girls’ Junior Championship and a successful playing career at Northwestern University prior to her graduation in 2005.

LeAnn Lewis, 54, of West Gilgo Beach, appeared in the 2017 US Senior Women’s Amateur where she advanced to match play, falling in the round of 64. She also appeared in the 2016 US Mid-Amateur and failed to advance through stroke play qualifying. She's claimed a number of Women's Metropolitan Golf Association titles over the years including three stroke play championships (1999, 2001, 2004) and two match play Championships (1993, 2000).

Marianna Monaco, 22, of Yonkers, won the 88th New York State Women’s Amateur Championship in July at Schuyler Meadows Club. She came from behind in the final round to win by four strokes after posting a final day 3-under 69. She was runner-up the year prior after losing in a sudden death playoff. She started her college career at Newberry University where she was chosen as all-conference freshman player of the year in 2014 and all-conference player of the year as a sophomore. She transferred to University of South Carolina in her Junior season and was a member of the women’s golf team for the remainder of her college career.