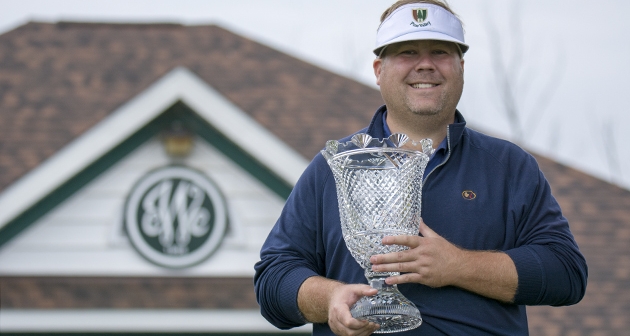 He faced off against close friend Billy Hanes of Crag Burn Golf Club, after both finishing the tournament at 217.

Placing in third was Patrick Nealon of Brierwood Country Club and two-time champion Jim Scorse of Stafford Country Club, at 218.

The playoff began on eighteen, Wanakah’s 433-yard closing par 4. Hanes pulled a 6 iron over the left trees and down the hill on his approach, while Miller stuck his shot pin-high to about twelve feet, and two-putted his way to the 35th title.

Hanes had an opportunity to close out Miller out on the 54th hole with a five-footer after Miller’s bogey, but couldn’t get the par putt to fall.

Scorse, who played with them in today’s leader group, had a makeable birdie putt on the eighteenth to force a three-way playoff, but was unable to convert it. “I had my chances coming down the stretch there. I hit really good putts, just nothing went in.”

This morning Hanes had a three-stroke lead over Scorse, and four over Miller.

The good friends began their rounds poorly, each with a few bogeys on their way out, while Nealon and Scorse penciled a few birdies each.

It was hard to anticipated Miller’s late charge with five birdies in his last twelve holes, after he started off 3-over through six. “I didn’t start very well and was kind of trying to get out of the way,” said Miller about his early expectations. He then birdied #7, #8 and lipped out a birdie putt on #9 and thought to himself, “Alright, now I’m in it.”

Headed into the final six holes, Hanes, Scorse and Nealon were all tied at even par, and Miller two strokes back at 2-over.

Nealon, made five birdies on his first fifteen holes, capped by an impressive chip-in birdie on the tough par-3 fifteenth. He then bogeyed the final three holes to finish at 72.

“I didn’t even look at the scores until 17. That green was lightning today. I thought I made the putt and it just slid by. It just didn’t work out in the end,” said Nealon about the finish.

“I woke up feeling good today. I knew I was going to make a run. I played really well until 16, it got me all week. A couple bad breaks at the end there,” he added.

“I was watching what Pat did. I knew that if I made birdie I would be tied with Billy,” said Miller referring to the seventeenth hole, when Nealon three-putted for the first time this week.

Miller then stuck his ball on the front edge of the green and made his uphill birdie putt. Scorse and Hanes, who had similar length putts, two-putted and walked off with pars.

Miller and Hanes won a New York State Men’s Amateur Four-Ball title together in 2015, and have been great friends on and off the golf course for a long time.

“It was cool. We’ve never actually competed at the end of a tournament like that. If I wasn’t going to win, he was the one I wanted to win,” said Hanes.

“It’s weird because we’re best friends. We talk every day,” confessed Miller. “For most of the day I was trying to just encourage him along. Then I came back from 3-over and got it to 2-under.”

Miller, who’s a member of the host club, as well as Crag Burn where he’ll loop around with Hanes and others, felt fortunate to win in the Buffalo area, especially at his club. “I’m still kind of shocked. It’s awesome to win at home.”

His first Mid-Am title came in 2014 at Teugega Country Club where he won by three strokes at 4-under 206.

Although Hanes came up short, he’s happy to head back to East Aurora with his second piece of NYSGA hardware this summer (he won the NYS Four-Ball in April with his younger brother David).

“I just didn’t have it today, but felt good with how I was keeping my emotions in check and everything. There’s more challenges to get out here and do this stuff nowadays, but I’m happy that I can and was able to play some good golf this summer.”

Top-10 will earn exemptions into next year’s 97th New York State Men’s Amateur when the NYSGA returns to East Aurora’s Crag Burn Golf Club. Top-20 will be exempt into the championship next year which will be conducted at Tuscarora Golf Club in Marcellus, New York.