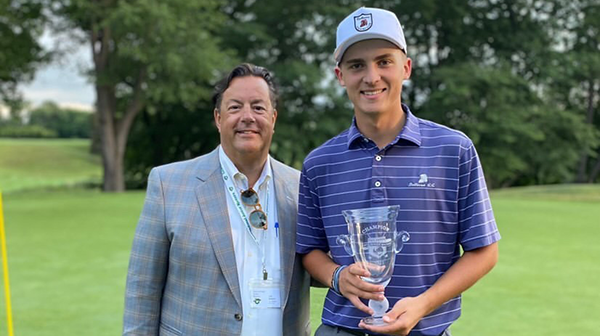 Colella began the tournament shooting four-over 146 during the stroke play rounds to finish in the top five and clinch a spot in the championship bracket. Niagara Wheatfield’s Anthony Delisanti took home medalist honors, shooting six-under 136 to earn the top seed as the tournament transitioned into match play.

Colella defeated Aydan Downer of Ontario in his first match 4&3, before advancing to the semifinals with a victory over Luke DelGobbo of Ontario 6&4. That set up a semifinal matchup against Eduardo Galdos of Peru. Colella won 5&4, capping an impressive run to the championship where none of his preliminary matches went to the fifteenth tee.

The Marcellus native recently wrapped up his junior golf career, where he was named to the Section 3 State Team in 2018 and 2019. In 2019, he was seventh on the Hurricane Junior Golf Tour’s all nation point leaderboard, picking up seven wins overall on the tour in the past two years. He will attend Binghamton University in the fall, where he will be a part of the men’s golf team.

The IJM is a junior golf tournament for boys 14 to 18 years old. It is the oldest international junior invitational in North America beginning in 1953. The IJM is unique in that it combines both medal play and match play into its tournament format. Top caliber players from around the globe have competed in the tournament, making it a world-wide showcase of junior golf talent, creating a field at the highest level of competition.