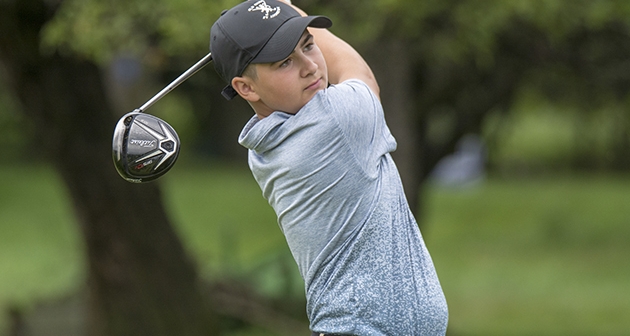 HAMILTON, N.Y. -- Matching par was enough for Anthony Maglisco to take an early three-stroke lead over the NYS New York State Boys’ Sub-Junior field during the opening round of play at Seven Oaks Golf Club.

Another Syracuse-area player, Velton Perry of Onondaga Golf & Country Club, posted a 3-over 75 and will join Maglisco in the final pairing along with Zachary Locke of Corning Country Club who came in at 76.

Maglisco’s card consisted of five birdies, five bogeys and eight pars in route to his even par finish.

He’s currently in a similar position to last year’s sub-junior winner, Luke Sample, who shot even-par and held a two-stroke lead after 18 holes and extended it to four strokes after 36.

The championship could be won in the same fashion by Maglisco, who recently captured the Syracuse District Golf Association Boys’ Sub-Junior Championship (held at Foxfire Golf Club, Radisson Greens and The Pompey Club over three rounds).

The back end of the field was racing against daylight Tuesday evening due to two hours of weather delays at Seven Oaks, but they were all able to finish. The same can’t be said about the Girls’ Junior, where two groups were unable to finish and stopped play, and will finish Wednesday morning prior to the Junior Amateurs shotgun start.